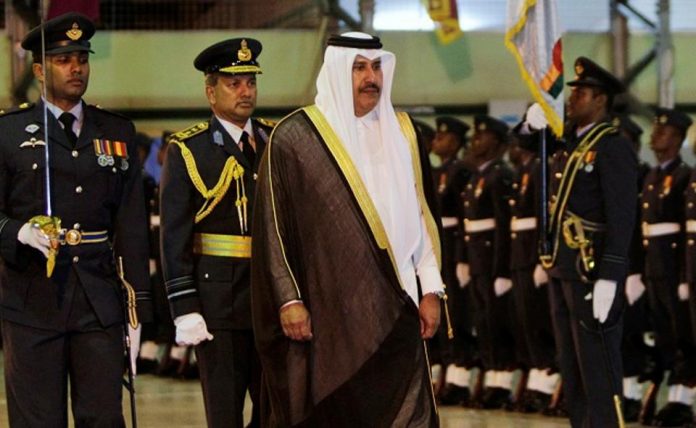 [Editor’s Note: It is both amusing and sad to see Secretary of State Tillerson publicly stating that Assad should have no future in any Syrian government, a statement that most would consider interfering in the future Syrian election. Imagine that.

Isn’t that what so many in the US government have accused Russia of doing in the US, with the twist that Russia is in Syria at government invitation and the US is not?

So it was a treat to have the former Qatari PM step up and spill the beans so openly on how the “Gulf Gang of Four” supported the Al-Nusra version of Al-Qaeda in Syria through Turkey. He left out Jordan though, but I am sure the King did not mind.

Don’t expect to ever hear of calls for international warrants for the aiding-and-abetting-terrorism perps with this new revelation. Who all backed the Syrian terrorists are widely known, and no one has done anything about it. There will be no sanctions.

But we can at least shame them as best we can, as they so rightly deserve. If Syria does not move faster to bring legal cases for reparations, that could become a factor in the elections. What is Assad waiting for? … Jim W. Dean ]

On October 26, former Qatar Prime Minister Hamad Bin Jassim said during an interview to the Qatari national TV that Doha supported the Syrian opposition armed groups and even terrorists like the al-Nusra Front (the local al-Qaeda branch) in Syria in coordination with Saudi Arabia, Turkey and the US.

“Anything [weapons] that was sent [to Syria] would go through Turkey and was coordinated with the US, and the distribution of anything was via US forces. Turkey, we and our Saudi brothers… There could be a mistake and support was given to a fiction [al-Nusra Front], but not ISIS. They are exaggerating… Maybe there was a relation with the al-Nusra Front. Maybe I don’t know about this. But I can say that even if this was the case, it was decided that the al-Nusra Front was not acceptable. The support for it stopped,” Bin Jassim said.

The former Qatari prime minister stressed that even Qatar does not has any problems with Assad now. He even described the Syrian president as a “former friend”.

“You [Saudi Arabia] are now saying keep Bashar, ok let him stay we don’t have any problem, We have no quarrel with him. He was a friend of us … But you [Saudi Arabia] were in the same trench with us, if you changed your mind [About Bashar] tell us so. We will change our attitude too… I’m not against anyone changing his mind when he finds out that he was mistaken. But he should tell his partner that he is changing his mind because the current situation doesn’t work anymore. Now Bashar works or this or that” Bin Jassim added.

Bin Jassim’s statement confirms that the Syrian issue was one the main causes of the Saudi–Qatari crisis that broke out on June 5. Due to this, the crisis will not likely end before all the Arabian Gulf countries agree on a wide range of issues, including the Syrian issue.

During the interview, Bin Jassim also said that “we [Arabian Gulf countries] fought over the prey [Syria], unlit the prey run away, and we are still fighting”. Syrian pro-government and opposition activists condemned Bin Jassim’s statement and blamed him for calling Syria a “prey”.