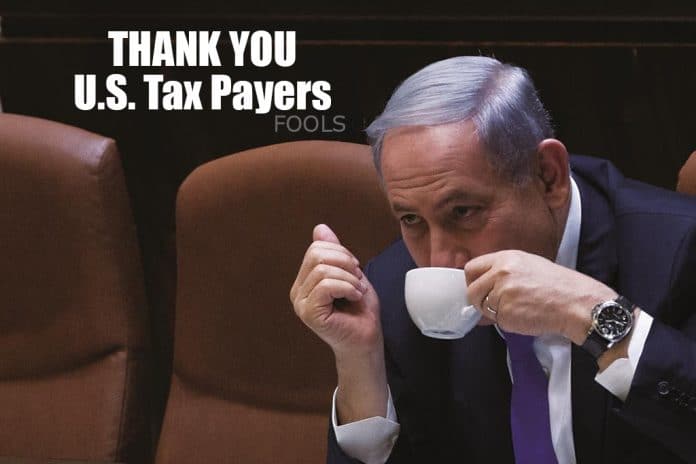 The amount of money in the coffers of the Israeli Tax Authority from taxes on dividends is 17.5 billion shekels or $5 billion US dollars. And I mean “US dollars” because US politicians from both parties take billions of dollars every year from the American people and give them away to the warmongering Jewish state of Israel.

The $5 billion surplus is from collecting taxes on dividends from shareholders of private Israeli companies. It does not include all of the other taxes the Israeli government collects.

Donald Trump constantly runs his mouth about what a bad deal the nuclear agreement that was signed during the Obama administration with Iran is. He even refused to recertify the nuclear agreement with Iran in spite of the fact that the International Atomic Energy Agency reported that Iran is in complete compliance with the conditions of the agreement. (This is because Trump and US politicians are moving the US towards a war against Iran just as was done in order to start the Iraq War.)

HOWEVER, Trump never speaks against the increase in American tax dollars taken from Americans and given to Israel for its war machine, which was done when Obama was in the White House. Trump, like 99% of US politicians from both parties, knows who runs American foreign policy for the Middle East: Israel through its overly powerful Israel lobby. Currently US politicians are giving Israel $10.1 million PER DAY to strengthen its nuclear armed military.

If Trump really believed in putting America and Americans first, he would cut all US handouts to Israel and demand that Israel payback to the American people the billions of dollars crooked US politicians took from Americans and gave to the Jewish state in exchange for political support from the Israel lobby. The $5 billion surplus would be a great starting point.

Unfortunately, Donald Trump doesn’t really care about putting Americans and America first. He pretends he does because he’s an opportunistic liar. One of the revealing statements he made which proves he is a liar was made by Trump during the presidential campaign. That statement was, “I love war, in a certain way.”

How could Trump possibly love war in any way when he’s never been in a war?? He had the opportunity to join the US military during the Vietnam War, but he decided against it. Trump received four deferments from the draft while he was in college.

When those ran out he was able to secure a medical deferment through his doctor who claimed Trump had bone spurs in his heels. This all makes clear that Donald Trump was much more interested in making as much money as he possibly could, rather than serving in the US military. His actions to stay out of the military and out of the Vietnam War made it impossible for him to really know if he truly loves war or not.

Donald Trump and all Americans need to realize the truth to this statement by the Deist George Washington in regards to America favoring one foreign nation over another. Washington said:

Against the insidious wiles of foreign influence (I conjure you to believe me, fellow-citizens) the jealousy of a free people ought to be constantly awake, since history and experience prove that foreign influence is one of the most baneful foes of republican government.

But that jealousy to be useful must be impartial; else it becomes the instrument of the very influence to be avoided, instead of a defense against it. Excessive partiality for one foreign nation and excessive dislike of another cause those whom they actuate to see danger only on one side, and serve to veil and even second the arts of influence on the other.

Real patriots who may resist the intrigues of the favorite are liable to become suspected and odious, while its tools and dupes usurp the applause and confidence of the people, to surrender their interests.

All of us need to take George Washington’s advice to awaken Americans to the “insidious wiles” and excessive foreign influence the Jewish state of Israel has on virtually all US politicians from both parties. The influence of Israel on the US politicians has already caused the Iraq War, which was solely in Israel’s interests. Now they are working diligently to start a US war against Iran for Israel’s benefit.

Perhaps the best long term solution to this problem is to break the religious spell Israel has on the minds of millions of Christians in the US. The Bible claims the Jews are God’s chosen people who God chose “above all people that are upon the face of the earth” (Deuteronomy 7:6) and that Israel was created by God through a land deed as this quote from a resolution by the state legislature of South Carolina makes clear:

Whereas, Israel has been granted her lands under and through the oldest recorded deed as reported in the Old Testament, a tome of scripture held sacred and reverenced by Jew and Christian, alike, as the acts and words of God;

This foolish statement is based on the false assumption that the Hebrew Bible/Old Testament is the Word of God. Once people realize that God gave us reason and NOT religion, this false assumption can be corrected. Once that happens, much of the power currently enjoyed by Israel and its lobby will be gone.

A great way to break this religious-based death grip Israel has on the US is to educate people to the fact that America was not created as a Christian nation as the pro-Israel religious right claims. This is evident by the Declaration of Independence only mentioning God in Deistic terms such as Nature’s God, and never mentioning Christianity, Jesus, Moses or the Bible, as a Christian document would.

The Treaty of Tripoli states, “As the government of the United States of America is not in any sense founded on the Christian religion” which is very straight forward. The influence of Deism is very evident in the formation of the American Republic. The Deistic roots of America do not serve the interests of the powers that be, therefore, they are suppressed to a large degree.

The American founder and Deist Thomas Paine wrote in The Age of Reason that the American Revolution made it possible for us to have a revolution in religion based on our innate God-given reason and Deism.

We need this Deistic revolution in religion if we are to break free of fear-based religious superstitions and religious violence and put an end to America and Americans being used to serve the Jewish state of Israel.