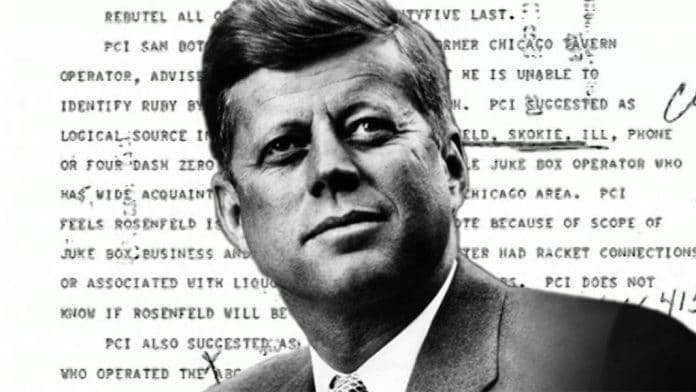 Former US President John F. Kennedy was murdered in a coup d’etat by a hard-line faction of the American military and intelligence agencies with the support of Israel’s Mossad and some organized crime networks, according to an American scholar and researcher.

Dr. Kevin Barrett, a founding member of the Scientific Panel for the Investigation of 9/11, made the remarks in a phone interview with Press TV on Friday while commenting on the release of documents related to the Kennedy assassination.

On Thursday, President Donald Trump allowed the release of thousands of documents related to the assassination of Kennedy in November 1963, but delayed the publication of some “sensitive” files at the request of the Central Intelligence Agency (CIA).

“President Trump, who has said interesting things about the JFK assassination in the past — such as the claim that Ted Cruz’s father, Rafael Cruz, may have been involved in the killing of President Kennedy — is an interesting president to decide whether to release these many, many thousands of intelligence records relating to the assassination,” Dr. Barrett said.

“And his decision has come as a bit of a surprise to many of us who thought he would just release them. He instead has chosen to withhold hundreds and hundreds of records rather than releasing them,” he stated.

“And what was really interesting was what he said when he did this. Trump said, ‘I have no choice.’ And then he said the reason for not releasing these records was that releasing them would do irreparable harm to national security,” he noted.

“These are very interesting statements to come from a president who’s talked quite loosely about the JFK assassination — which of course was an American coup d’etat — in the past,” the analyst said.

“So, Trump seems to be telling us something between the lines. He has no choice. Well, what does that mean? He certainly theoretically has the choice of just releasing everything. Or maybe if he didn’t have a choice, I guess that would mean somebody was holding a Mannlicher Carcano to his head, or possibly a more viable gun of some kind,” he said.

What harm release of complete info about JFK case could do?

“And when he said it would do irreparable harm to national security: How could a case more than 50 years ago have any bearing on today’s national security? Obviously all of the sources and methods, meaning the foreign spies and the way they were recruited, have long since passed into oblivion,” Dr. Barrett said.

“The only rational understanding of this kind of statement is that the irreparable harm to American national security that could come from a complete and full release of all of the government’s information about the JFK case would be that some of it might inadvertently reveal that President Kennedy was murdered in a coup d’etat by a hard-line faction in the American military and intelligence agencies with the private support from billionaires like H.L. Hunt, and perhaps from some organized crime networks, including Meyer Lansky’s,” he stated.

“We know about that these are the same people who tried to kill President Castro, and apparently found Kennedy an easier target,” he observed.

“And Michael Collins Piper’s book Final Judgment: The Missing Link in the JFK Assassination Conspiracy makes the case that behind the CIA, which was the most active player in the coup d’etat that overthrew Kennedy, we had the hidden hand of the Israeli Mossad by the way of the CIA’s Counterintelligence chief James Jesus Angleton, who was in fact an Israeli mole in the CIA. And to this day, there is a statue honoring Angleton in Tel Aviv,” the researcher said.

“These are sorts of things that Americans will learn if the truth comes out. Their faith in their government would be shaken, and that is the harm to the national security that might be done,” he added.

“But I think in the long run it would actually help American national security by helping us reestablish our democratic republic. That’s what needs to happen. We need the full truth about the JFK assassination and so many other crimes of the Deep State,” Dr. Barrett concluded.