As reported on False Flag Weekly News today (watch it above, click HERE for stories and HERE to support the show) the Las Vegas shooting story just got a whole lot stranger.

Tru News is reporting that an FBI SWAT team responded almost immediately when shots broke out. But the strange thing is that they did not head for the 32nd floor of the Mandelay Bay hotel, where security guard Jesus Campos had already been wounded, in a massive volley of fire, six minutes before the massacre began. Instead, the FBI team stormed the Tropicana Hotel’s Security Office with the apparent aim of confiscating security videos “recording an unparalleled high definition view of the massacre from beginning to end.”

Why was the FBI more interested in confiscating (and disappearing?) evidence than in stopping the shooting?

We already reported the sinister implications of the endlessly-changing story about the shooting’s timeline. (See this excellent LA Times story.) 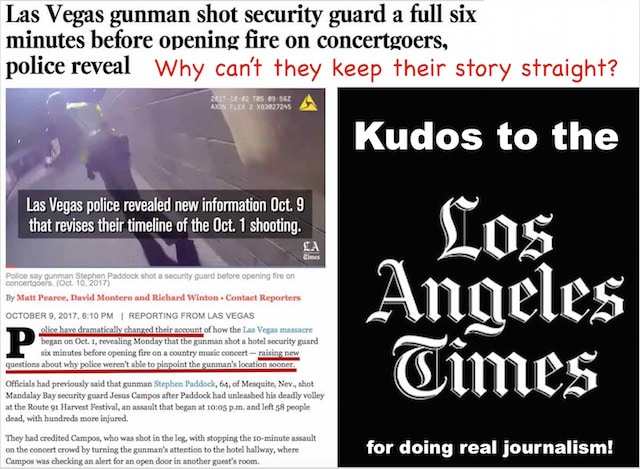 As I wrote for American Free Press two weeks ago:

“Rarely do America’s mainstream newspapers evince skepticism towards official pronouncements about suspected false flag events. But the problems with the police timeline of the October 1 Las Vegas massacre are so egregious that even the Los Angeles Times couldn’t help but notice.

“The previous official story held that the lone gunman, Stephen Paddock, fired from his 32nd floor hotel room on the crowd below from 10:05 to 10:15 p.m.  Then at 10:15, using his surveillance cameras, he saw hotel security guard Jesus Campos in the hallway and unleashed a barrage of gunfire through the door, wounding Campos. Campos notified the authorities, who arrived shortly thereafter. But the police were apparently in no hurry to breach Paddock’s room and ensure the safety of the people below. They didn’t bother to break into Paddock’s room until 11:20, an hour later! When they finally did so, they discovered that Paddock was dead, supposedly from a self-inflicted gunshot.

“The original timeline made no sense. Why would police linger for an hour outside the door of a mass shooter who had just killed more than 50 people and wounded hundreds—and who might still have guns and ammunition available with which to kill and wound hundreds more? Aren’t SWAT teams trained to take heroic action, risking their lives if necessary, to kick in doors and stop mass shootings?

“It isn’t surprising that the Las Vegas Sheriff’s Department has seen fit to radically revise its original timeline. What is surprising, even shocking, is that the new timeline is even more absurd than the old one.

“According to the new timeline, Paddock shot through his door, wounding Campos, at 9:59 p.m., six minutes before the mass shooting started. Campos must have immediately notified authorities. So by around 10 p.m., five minutes before the slaughter began, hotel security must have called 9-1-1 to report that someone had fired a burst of automatic gunfire on the 32nd floor. When reports of a massacre began rolling in shortly after 10:05, police should have already known which floor and which room the suspect was shooting from. Yet they didn’t bother to breach Paddock’s door till 11:20 p.m.!”

Why did it take the authorities more than 80 minutes after Campos must have reported a massive volley of gunfire on the 32nd floor to get to that floor and breach Paddock’s room?! Why did the FBI SWAT team react so quickly by rushing to grab surveillance footage — without taking any interest in going after the shooter?!

But that doesn’t mean the whole event was a hoax staged with no actual gunfire, just crisis actors, as Jim Fetzer (recently fired from Rense) seems to think.

Listen to my back-to-back interviews with Ian Greenhalgh and Jim Fetzer on the Las Vegas shooting.

Though Jim will undoubtedly bite my head off for writing this, I think Ian is barking up the right tree with his “hybrid” interpretation of the event. Yes, a real shooting occurred. Yes, real people were killed and injured. But there was probably a certain amount of choreography going on as well, in part with the aim of baiting “conspiracy theorists” into obnoxiously accusing victims of being crisis actors…a scenario that creates very bad publicity for the truth movement, as exemplified by this recent Guardian story: 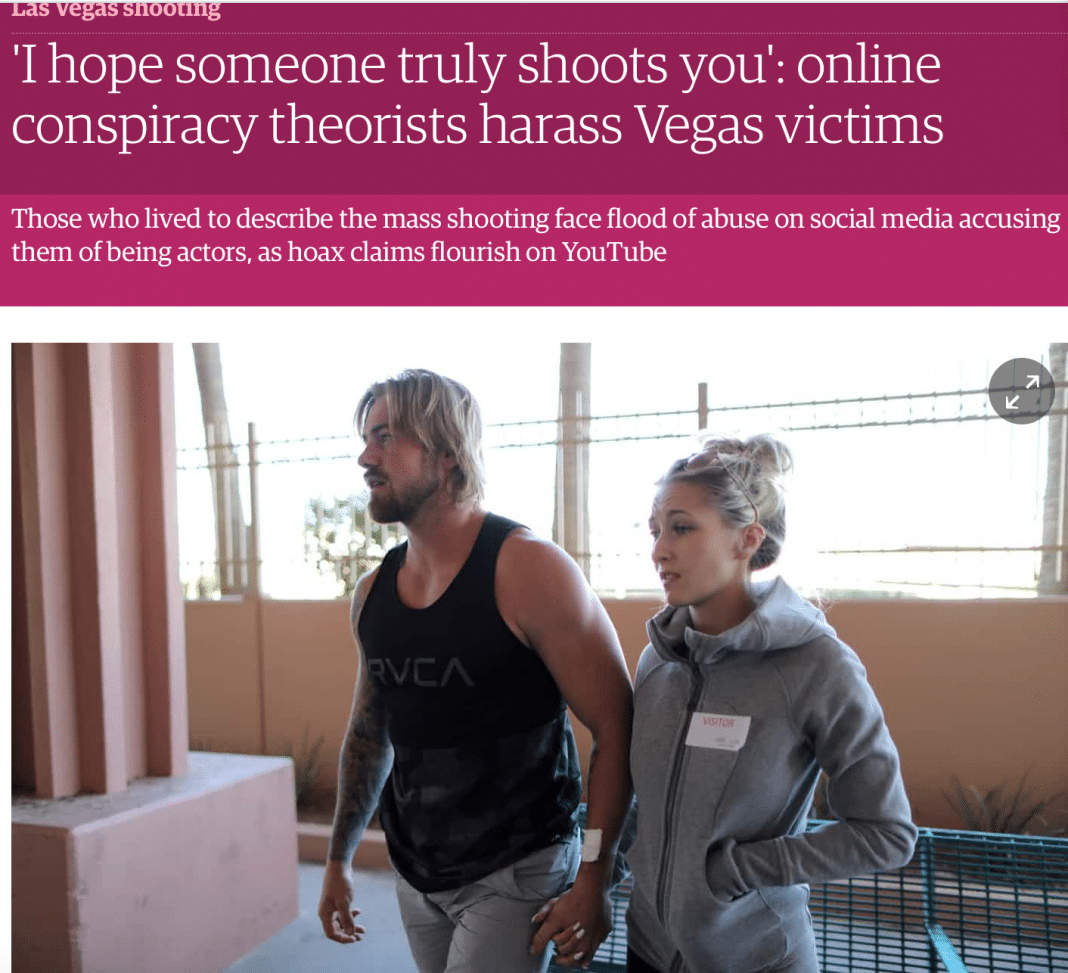 I recently spoke to an ER physician with extensive experience in war zones about the photo of Braden Matejka’s supposedly fake head wound:

Having talked with Braden Matejka, as well as with his dad and co-workers, I think he’s a normal guy with an unusual wound who is taking a lot of unwarranted abuse. So please, folks, in the future, please voice your suspicions about crisis actors with more thoughtfulness and sensitivity! You (and the cointelpro guys who probably started the whole thing) are doing Cass Sunstein’s work for him!

And if you disagree, feel free to call me a crisis actor in the comments section.