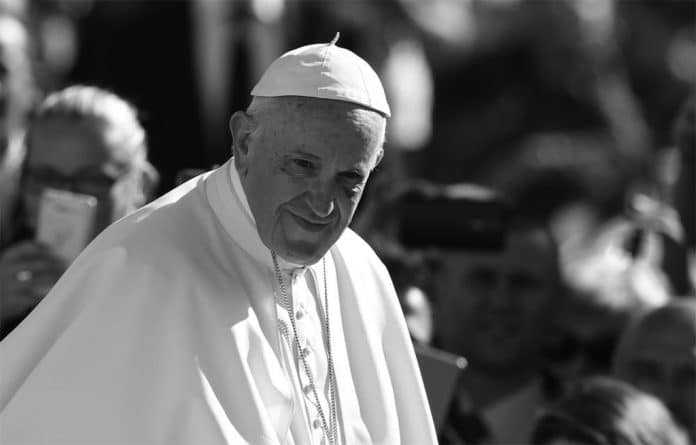 Brian M. McCall is Associate Dean for Academic Affairs at University of Oklahoma. He is also Associate Director of the Law Center, Director of Legal Assistant Education Orpha and Maurice Merrill Professor in Law.

Current State of the Catholic Church…..

Tell us a little bit more about your background and why you are a Catholic?

I was born and baptized in 1970 just after the change to the New Mass. I went to 12 years of Catholic schools. Philadelphia, where I was raised, was a fairly mild dioceses (delaying communion in the hand for many years). Yet, my experience with the Faith was superficial. Doctrine was oversimplified and de-emphasized. Liturgies were mundane and uninspiring.
I attended college at Yale and graduate school at the University of London and focused on Medieval Literature and History. I was fascinated by the worldview and liturgical/cultural richness of the Church in that age.

Yet, I think at the time I did not see a connection to my life. The Church that appeared in literature of the period was not the same entity I met on Sundays. I saw no connections. Then years later I attended a Traditional Mass. Like a bolt of lightning it hit me: the Catholic Church of today should be the same Church of the past. Something had changed it integrally.

I started to read everything I could about Vatican II and the liturgical and doctrinal changes. I found the truth and beauty of the Church hidden under the disfiguration of the post Vatican II façade. Until that time I was a cultural Catholic. I had some trappings of Catholic culture and some vague vestigial elements of the Faith but I had no interior life and these trappings had no real impact on my moral life.

The more I read, the more I found the depth and breadth of the Faith. Through the guidance of holy traditional priests over the past two decades I have been guided to begin a true interior life.

What are Catholics to make of the Second Vatican Council?

It is an historical fact, albeit a tragic one. It is a reality that cannot be ignored. If you are not against its errors you are with them. It is the French Revolution in the Church. It was the Trojan horse through which dangers to the Faith were introduced into the intellectual life and praxis of the Church. We need to see the Council for what it was in fact historically, a power shift from the traditional authorities to the Modernists whom all the popes from Pius X to Pius XII had been trying to keep under control.

This question should be distinguished from the documents of Vatican II. As to the documents, Catholics must believe anything in the documents which is clearly a repetition of the deposit of the Faith and refuse any statements that are contrary to the Faith as always and everywhere believed, and should out of prudence avoid as dangerous any ambiguous or unclear statements capable of, or favoring, erroneous concepts or ideas.

Why is there so much confusion in the Church?

In order to advance the Modernist agenda, the drafters of the documents made extensive use of ambiguous and vague language. They could not obtain the assent of the fathers to clearly Modernist or erroneous doctrine. They had to resort to ambiguity. Ambiguity by definition breeds confusion because it is open to multiple interpretation.

Ambiguity in doctrine has given birth to anew Babel of doctrine thus there is no canon or rule of Faith assented to by all. To defend the Council the authorities have had to resort to a violation of the principle of non-contradiction.

They claim they are teaching the same thing as the Church has always taught and that the liturgy is the same liturgy in essence as always offered, yet that statement contradicts the reality before all to see. This contradiction breeds confusion just as if I showed you compass indicating we are walking North but I told you to believe we were walking South. This contradiction between my claim and your perception of reality can only lead to confusion.

What should Catholics make of the direction Francis is pursuing?

It is merely the natural and logical conclusion of the new orientation of the Council. He is merely advancing the direction chosen. He is doing so in a more accelerated manner than his predecessors and he has abandoned the charade of claiming he is not changing anything. He is in a sense the most honest of the post Vatican II popes as he makes no pretense of what he intends and does.

Can traditionalists ever get along? Or will it be a fruitless struggle between all the varying camps?

Christians have always faced the temptation to strife and sins against charity. St. Paul is already correcting and warning the early Church. Yet, when the shepherd is struck the sheep will scatter. Scattering sheep will inevitable crash into each other. Thus, the temptation to strife and disagreement is radically greater when there is a collapse of authority as we have experienced since the Council.

This is why the Roman authorities have worked for decades to keep traditional leaning groups divided and pitted against each other. They know that if they were united under a single authority, they would wield incredible influence in the Church.

Given Pope St. Pius X, Fr. Malachi Martin, Cardinal Biffi and Archbishop Lefebvre all stated the Antichrist was close why do Catholics have such a hard time accepting this declaration?

Accepting reality is often frightening and so denial and delusion are emotionally easier. It is a fact that since the coming of Our Lord, every single day brings us closer to the last days. How much farther away are they specifically?

None of these great Churchmen knew for certain. What they did know was that the spirit of the Antichrist, the spirit that would be necessary for the world to be seduced by him has been growing steadily since the sixteenth century. The more this spirit of Antichrist, the more prepared is the world to receive him. It is this that Catholics should accept and not merely a sensationalist millennialism.

So many Catholics are falling into despair. What can Catholics do to keep in Faith and preserve unto the end?

Find a good traditional spiritual director. Only through developing a deep interior life fortified, when possible in this crisis, by the Sacraments can we avoid the pitfall of despair. Developing a deep relationship with Our Lord is the only way we can stay rooted to the truth that this is His Church and the partisans of error who pillage it do so only so long as He permits them.

SOURCETradCatKnight
ATTENTION READERS
Due to the nature of independent content, VT cannot guarantee content validity.
We ask you to Read Our Content Policy so a clear comprehension of VT's independent non-censored media is understood and given its proper place in the world of news, opinion and media.