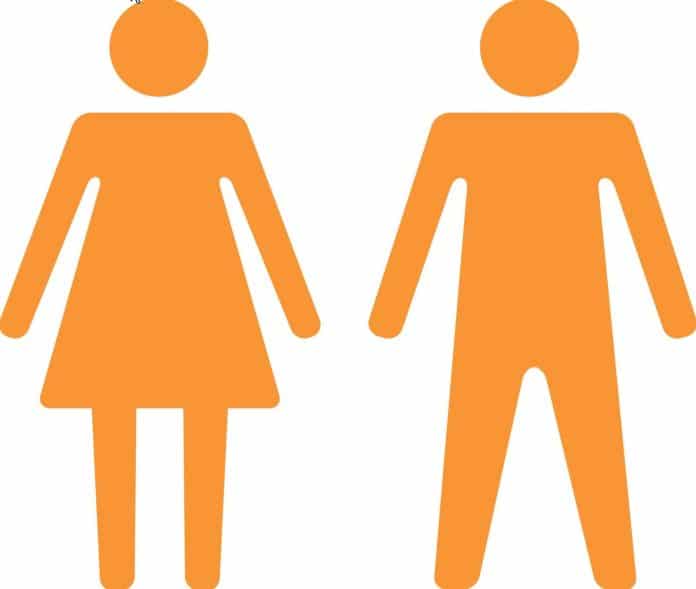 The distinction between male and female genders is based less on their physiological traits and more on their respective mindsets. These mindsets, in turn, are a product of social expectations of behavior in a cultural milieu. It is expected from male members of a society to behave in a supposedly manly fashion; and similarly, it is expected from female members of a society to act in a purportedly feminine manner.

But this emphasis on binary distinction of genders in a rural-agrarian setting served a purpose: the division of functions between male and female members, where women were expected to do housekeeping and nurturing children, while it was expected from men to produce food for the family. Although this distinction is still maintained, to a lesser or greater extent, in urban and industrialized societies, but a distinction based on division of functions is a hypothetical imperative: as means to achieve certain ends and not an end in itself.

Moreover, it would be normative to contend that in primitive tribal societies, women had the same social status as men. The nomado-pastoral and agricultural eras were the age of hunting-gathering, farming and strenuous physical labor, and it is a known fact that physically, women are a weaker sex, that’s why we have separate sports and athletics events for men and women.

Women attained the status of equality after the onset of industrial revolution and a shift to mechanized labor, when the focus shifted from physical labor to intelligence and information; and when it comes to cognitive faculties, women are just as intelligent as men, if not more so.

Notwithstanding, instead of taking a binary approach to the classification of genders, modern feminists now favor to look at the issue from the prism of a whole spectrum of gender identities. The way I see it, it should not be about being manly; rather, it should be about being human, which is the common denominator for the whole spectrum of gender identities.

When we stress upon manliness, it’s not manliness per se that we are glorifying, but the presence of feminine attributes in the socially-elevated male gender is something that we, as the agents of patriarchal structure, frown upon. But such machismo is not a natural order of things, because more than the physical attributes, the rigid segregation of genders is a product of social constructions that manifest themselves in the artificial cognitive and behavioral engineering of male and female mindsets.

In our formative years, such watertight gender identities and their socially-accepted attributes are inculcated in our minds by assigning gender roles, but this whole hetero-normative approach to the issue of gender identity is losing its validity in a post-industrial urban milieu, where gender roles are not as strictly defined as they used to be in the medieval agricultural societies.

More to the point, what are the virtues that are deemed valuable in women separately from the ones that are deemed desirable in men? If meekness, diffidence and complacency are disapproved in men, then why do we have double standards for separate genders? Self-confidence, assertiveness and boldness should be equally encouraged in both genders without discrimination.

However, the dilemma that we face is that the mindsets of individuals and gender roles are determined by the culture, but if the society itself is patriarchal and male-dominated, then it tends to marginalize and reduce women to a lower social status. Therefore, a social reform is needed which can redefine “virtue” and the qualities that are deemed valuable in human beings should be uniform and consistent for both genders.

Regardless, if we study the behavioral patterns in the animal kingdom, a tigress is as good a hunter as a tiger; in fact, the females of most species are generally more violent than their male counterparts; because they fight not only for food, but also to protect their offspring. But how often do we find a violent woman in human history and society? Excluding a handful of femme fatales like Cleopatra, bold women are a rare exception in human history. Thus even though by nature women are just as assertive and violent as men, but the patriarchy-inspired nurture and male-dominated culture have tamed women to an extent that they have unlearnt even their essential, innate nature.

Two conclusions can be drawn from this fact: first, that it’s always nurture and culture which play a more significant role in determining human behavior compared to some far-fetched concept of essential human nature; and second, that essentially human nature is quite similar for both genders, it’s only the behavioral process of social construction of gender identity that defines and limits the roles which are deemed proper for one gender or the other.

Additionally, even regarding physiological distinction between male and female genders, evolutionary biologists are of the opinion that such differences only have a minor importance. Even if we take primary reproductive organs, for instance, clitoris is regarded as a rudimentary penis in females and nipples in males are regarded as rudimentary breasts, a fact which proves beyond doubt that specialization of male and female reproductive organs is merely a mechanism to keep genetic material unimpaired by preference for meiosis division over repetitive and harmful mitosis reproductive division.

Moreover, it is generally assumed about males that due to the presence of testosterone, they are usually more aggressive and competitive than females. If we assess this contention in the light of global versus local character traits theory, however, testosterone only promotes a specific kind of competition, i.e. competition for mating. When it comes to competing for food, however, males and females of all species exhibit similar levels of aggression and competition.

Therefore, it would be reductive to assume that the distinction between male and female attitudes and behaviors is more physiological and hormonal than it is due to the difference of upbringing and separate sets of social expectations of behavior that are associated with the members of male and female sexes.

Finally, there is no denying of the obvious fact that testosterone is primarily responsible for secondary sexual characteristics in the males of all species. Through the process of natural selection, only those males that have succeeded in mating are able to carry forward their genes, which proves that males with higher testosterone levels do have a comparative advantage in the competition for mating, but its effect on attitudes and behaviors of animal species, and particularly in human beings with their complex social institutions and cultures, is tentative and hypothetical, at best.

About the author:
Nauman Sadiq is an Islamabad-based attorney, columnist and geopolitical analyst focused on the politics of Af-Pak and Middle East regions, neocolonialism and petro-imperialism.