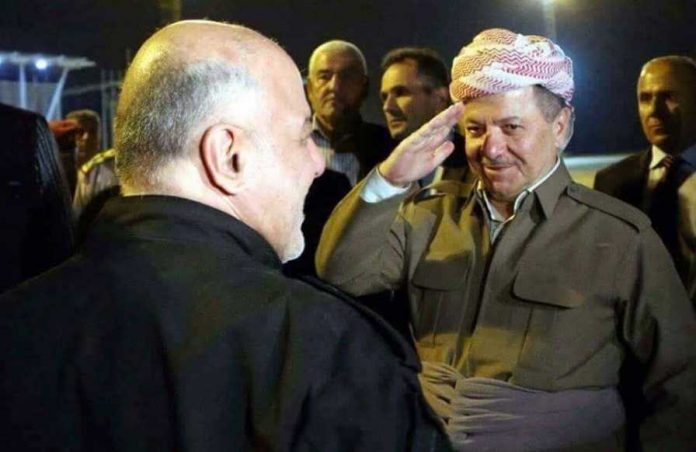 [Editor’s Note: Many thought Barzani to be indestructible with his family having complete control over the military and security organizations. But his ploy of taking Kurdistan independent while Iraq was still in the middle of a terror war is ISIS, when Kurdistan was not, killed any chances of success. He took his independence movement over the cliff, like from the movie, “Thelma and Louise”.

But this move may turn out to be a slick dodge to get Barzani out of the responsibility cross hairs by letting new people make a settlement with Baghdad, where he can then come back later and claim they made a bad deal, a la Trump.

His announcement that he will remain in the Peshmerga is also telling, and shows why national leaders steal so much money, as he has enough to buy his way back in down the road when the dust has cleared.

As Gordon has mentioned Barzani has survived a lot in the past, and he may well survive this, if no one assassinates him to make sure he does not come back, which would not be the first time that has happened…Jim W. Dean ]

Barzani’s Kurdistan Democratic Party (KDP) said in a statement that Barzani will continue work to “develop and further strengthen democratic principles in Kurdistan, protect the achievements of our nation, and maintain and develop Kurdistan’s legitimate institutions.”

In his letter, Barzani also called on the Kurdistan Region Parliament to resolve the matter of the duties and powers of the president to ensure there is no “legal vacuum.”.

The Iraqi-Kurdish TV channel Rudaw reported that tensions erupted in the Kurdistan Region Parliament after the Gorran Movement opposed Barzani’s suggestion to distribute his powers between the local government and the Parliament and the Judicial Council temporarily.

Rudaw said that Gorrran Movement requested that Barzani powers be given to the Kurdistan Region Parliament only.

Barzani decision to step down from Kurdistan Region presidency is a direct result of the failed Kurdistan Region independence referendum that was organized by Barzani himself. Another result is the ongoing negotiation between the Iraqi Army and the Kurdish Peshmerga force to hand over more disputed areas to the Iraqi Federal Government.

Iraqi sources reveled that a new negotiation session between the Iraqi Army and the Peshmerga was held in Mousl city on Sunday. The Mosul meeting was reportedly sponsored by the US. US officials attended the meeting.

The Peshmerga and the KRG may approve the Iraqi Army demands in the upcoming days in order to avoid more violense that could lead to losing more ground in favor of the Iraqi Federal Goverment.