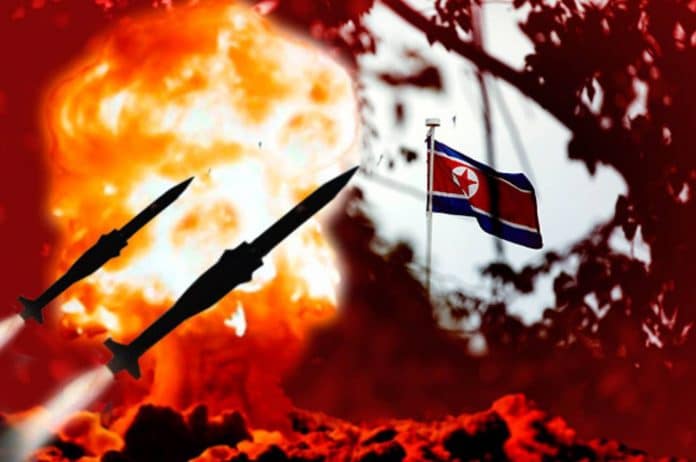 If anyone is still wondering why North Korea was being “provocative” in missile tests and repeatedly declaring what would seem to be a daunting arsenal (although there is still no irrefutable, concrete proof of deliverable, long range nuclear weapons capability) here is just a small taste of what it’s southern neighbor, in cahoots with Godfather America, has planned:

‘Kill the King and the regime will collapse. That is the rationale offered by South Korean military planners for a “decapitation unit” they are forming for the sole purpose of assassinating North Korea’s Supreme Leader, Kim Jong-un. They are convinced that, in the ensuing chaos, North Korea’s leadership would disintegrate and abandon the nuclear programme on which he has staked his prestige.

‘ “Decapitation means we have only one target,” said Choi Jin-wook, a long-time North Korea analyst at the government’s Korea Institute for National Unification. “It’s much simpler to eliminate the leader than attack military bases.”

South Korean defence planners have ordered “decapitation strikes” in air, naval and ground exercises in which the targets are simulated to resemble one of Kim’s many hideouts or residences. Such exercises are the prelude to the formal formation later this year of the unit, Spartan 3000.

“The ministry cited the successful test-firing of a German-made Taurus missile at a target off the south-west coast as an example of the weaponry that might be deployed in an attempt to kill the North Korean leader.

“The missile, with a range of 310 miles, flew about 150 miles, hitting its target in the Yellow Sea.”

South Korea of course is not threatened with being wiped off the face of the earth for test firing a missile in to the sea, as is its northern neighbor.

Think about the words “decapitation unit” – the horrific image which leaps in to any even semi-normal mind. This kind of plotting dwarfs even the horrors of deranged criminals literally decapitating in the Middle East. But then swathes of them too are US backed.

It should also not be forgotten that in the Trumposphere, where General James Mattis is now Defence Secretary the General has some pretty arresting principles. Life is clearly very cheap and killing the most casual of undertakings:

A few of his views include:

“The first time you blow someone away is not an insignificant event. That said, there are some assholes in the world that just need to be shot.”

Be polite, be professional, but have a plan to kill everybody you meet.”

“Find the enemy that wants to end this experiment (in American democracy) and kill every one of them until they’re so sick of the killing that they leave us and our freedoms intact.”

Precisely the “experiment in American democracy” inflicted most recently on Afghanistan, Iraq, Libya and Syria, with North Korea and Iran in their sights.

With thanks to William Blum, the list of US mass slaughtering “democracy” projects since 1949 is at

Talking of Afghanistan, here are General Mattis’ thoughts on democracy- spreading there:

“You go into Afghanistan, you got guys who slap women around for five years because they didn’t wear a veil. You know, guys like that ain’t got no manhood left anyway. So it’s a hell of a lot of fun to shoot them. Actually it’s quite fun to fight them, you know. It’s a hell of a hoot. It’s fun to shoot some people. I’ll be right up there with you. I like brawling.”

In the real world these are surely views which might well find the holder in a secure psychiatric unit, if not a maximum secure prison.

Contrast this to an ignored approach from the Korean Peninsular, where both Australia and North Korea have Embassies in Seoul.

On 28th September: “The Embassy of the Democratic Peoples Republic of Korea (DPRK) in the Republic of Indonesia presents its compliments to the Parliament of the Commonwealth of Australia and has the honor to inform that the Foreign Affairs Committee of the DPRK Supreme People’s Assembly sent the open letter to the Parliaments of the different countries.

” … the Embassy of the DPRK has further the honor to enclose hereby the above-mentioned letter.”

The preamble ends with diplomatic courtesies and “highest considerations.”

The letter in part written in the third person, reads as follows:

“Open Letter to the Parliaments of Different Countries.”

“The letter noted that Trump, President of the U.S., styling itself ‘the superpower’, denied the existence of the DPRK, a dignified sovereign state (and threatened) ‘total destruction’ at the UN …

“The Foreign Affairs Committee of the DPRK … mission (is to) promote friendly and co-operative relations with the parliaments and peace-loving people of the countries around the world … based on the ideas of independence, peace and friendship, bitterly condemns the reckless remarks of Trump as an intolerable insult to the Korean people, a declaration of war against the DPRK and a grave threat to the global peace …

(From his first day in office, the President): “has engaged in high handed and arbitrary practice, scrapping international laws and agreements (putting America first) at the expense of the whole world.”

Threats of annihilation and sanctions have denied the people of the DPRK “normal economic development, in breach of the UN Charter …”

Trump, the letter states: “threatened to totally destroy the DPRK, a dignified, independent and sovereign State and a nuclear power. It is an extreme act of threatening to destroy the whole world.”

The correspondence concludes with the: “… belief that the parliaments of different countries, loving independence, peace and justice will fully discharge their due mission and duty in realizing the desire of mankind for international justice and peace (and with vigilance) against the reckless moves of the Trump Administration trying to drive the world in to a horrible nuclear disaster.”

With Trump threatening that his finger is hovering over the nuclear button, few could surely disagree with much of the DRPRK’s sentiments.

Donald Trump of course boasted menacingly to “totally destroy” North Korea in his address to the UN General Assembly on 19th September, the UN Charter’s fine founding words clearly unknown to him.