Americans need to examine the origins of the Bush Family closely and re-examine the Sherf(f) relationship, including DNA testing to identify if George H. W. Bush was really a German national who illegally was planted in the United States of America. This could be part of the issue internally with the weakening of the USA to Russia and China, that was planned before and part of a nefarious agenda. Also to be examined should be Carlyle Group and the impacts of the oil lobby on American foreign policy that has put us in a precarious position globally while there are other power resources available. – Ann

Countries around the world are turning against US leadership and the positions the leadership currently holds.

It is interesting that simultaneously, both China and Russia are in a power position as the US may be in decline in regards to standing, foreign policy wise and economically. After years of destabilization with the use of what may now be called Jigsaw and other groups operating, as well as wars based on false pretenses, the world body may be finally aware of those in power within the US that have tried to manufacture war for financial benefits.

Important questions remain regarding Russia and China. Is Russia supporting the Far-Right Nationalist Agenda? Is that part of the significance of Russian President Vladmir Putin’s relationship with Trump?

In a meeting, Trump has a curious lower body position as he shakes Putin’s hand. During the meeting there is a sense that Putin is above Trump.

Other interesting presidential photos show such as the one below, a curious relationship with former President George W. Bush. The photo below was taken on November 1, 2001. Considering the information that Russia in all likelihood knew about 9/11 as was reported previously here in VT, Pravda: Putin Threatens to Release Satellite Evidence of 9/11   this Reuters image is even more curious. 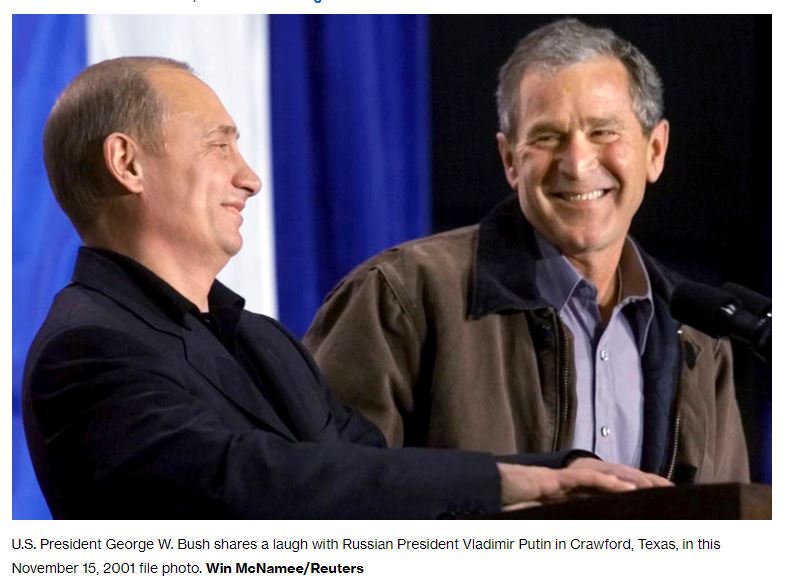 Then looking at this image of Putin with Bibi Netanyahu, one really has to wonder what the intention is regarding the United States and American freedoms which have been curtailed so dramatically since 9/11/01 and now even more dramatically during the Trump Administration. Why was H.R. McMaster, the National Security Adviser, shut out of the meeting with Netanyahu recently? 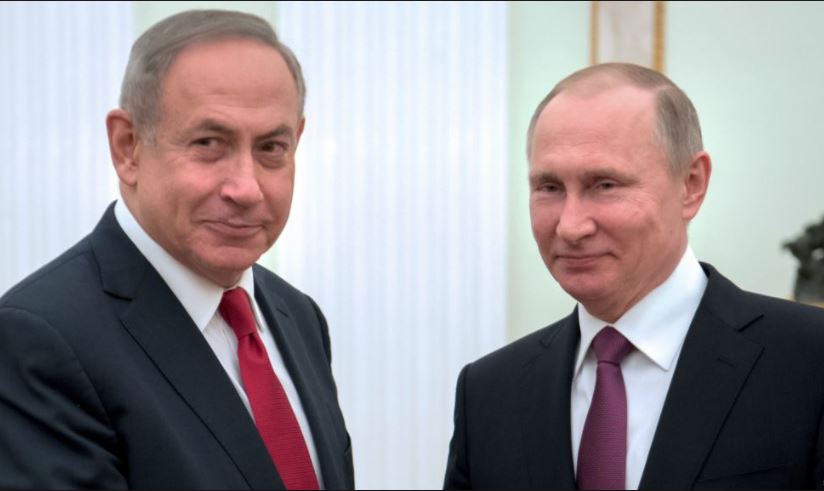 According to Aljazeera in an article, Russia: A resurgent superpower?  Matthew Heimbach, head of the white supremacist Traditionalist Workers Party, said last December ” ‘I really believe that Russia is the leader of the free world right now. Putin is supporting nationalists around the world and building an anti-globalist alliance, while promoting traditional values and self-determination.’ ”

“After Putin’s return to the Kremlin for a third presidency in 2012, Moscow has become a global bellwether of neo-conservative, ultranationalist, right-wing and anti-globalist political forces, and the Russian Orthodox Church eagerly fills the void left by the collapse of the Communist dogma.

” ‘Russia adheres to traditionalism, the so-called tolerance programs don’t work here, and as an opponent to the US and the Anglo-Saxon world it does interest some rightist political forces,’ ” Moscow-based political analyst Alexei Mukhin told Al Jazeera.

Is it really self-determination that Russia is after, or is it control of the people/individuals while supporting “sovereign” governments that do not support personal liberty? Sovereignty is about individual liberty and this then extends to the nation state which is also sovereign. Sovereignty is not totalitarian control. Why is Russia siding with leadership in the US and elsewhere that are suppressing individual sovereignty, with the exception of Syria? Why is our government supporting it/allowing suppression of the freedoms guaranteed in the Constitution?

For review, if it is still in effect, the First Amendment of the Constitution of the United States of America, “Congress shall make no law respecting an establishment of religion, or prohibiting the free exercise thereof; or abridging the freedom of speech, or of the press; or the right of the people peaceably to assemble, and to petition the Government for a redress of grievances.”

Is our current government illegitimate because of fraudulent elections, therefore allowing illegal legislation/charges against protests and the press to be passed? Do Russia and China have the US in a negative position right now based on the past intentional destabilization and war crimes committed, thereby allowing our potentially illegitimate government to make deals with them that may bring down the US/USA ultimately? The Trump administration is closing the State Department office that investigates war crimes, the Office of Global Criminal Justice.

Russia is buying US Debt:  “In March, the country bought $13.5 billion of US government bonds — better known as “Treasury securities.” Russia’s total holdings of US debt have now increased to nearly $100 billion, according to recently released Treasury Department data.”

Russia has or soon will finally complete payment of all debt from the USSR.

“The Soviet Union’s foreign debt will be paid in full within weeks, once Moscow settles with Bosnia and Herzegovina, according to the Russian Ministry of Finance.

“According to calculations, Russia owes the Balkan country, once part of the former Yugoslavia $125.2 million, said Deputy Finance Minister Sergey Storchak. This is the last Soviet debt, and it will be paid back in 45 days, he added.”

The Chinese economy is growing according to CNBC, “A ‘spectacular’ trend is transforming the world’s second largest economy, Stephen Roach says.”

“The Chinese economy seems to be making remarkable progress in transforming itself into more of a consumer-based model driven more by cashless e-commerce,” Roach said. “Their e-commerce share of total consumption is more than double ours [U.S.], and that gap is rising.”

“The latest data show China’s economy grew at a faster-than-expected 6.9 percent in the second quarter. The pace far exceeds where the United States is right now, with its economic growth rate at 1.42 percent.”

Internally in China,  “China bans Facebook’s WhatsApp as internet freedom suppression continues.” As the US also weighs in on internet freedom through corporate control of the internet at the FCC, it is interesting how overt and covert suppression create the same results. Last week on July 12, “Major internet companies took part Wednesday in a ‘Day of Action’ to show their support for the Federal Communications Commission’s net neutrality rules,” according to the Hill.

“On websites and social media, companies tried to rally the public and urged Republican FCC Commissioner Ajit Pai not to kill the Obama-era rules, which require internet providers to treat all web content the same.”
Why are the Republicans pursuing what seems to be a similar outcome that repressive governments have, utilizing a corporate agenda to enable similar suppression?

Will there ever be a real investigation into what should be seen as ongoing organized crime operating inside the US and externally to reduce personal freedom globally? The American dream of freedom was real to the world, not only to American citizens.

This should be part of the real Russia/Trump investigation, one that should also extend to include the Bush Administration, 9/11/2001, and potentially the Nixon Administration in regards to China. What were their goals and objectives? This has been a long game strategy to suppress and control the people on the planet, and may even be one that is not created by humans. And not all off-world races are part of their plan.