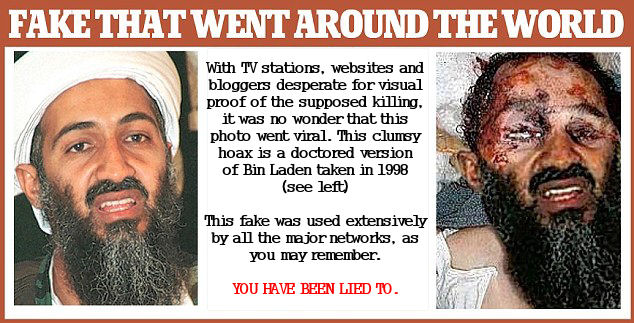 Did Staff Sgt. Logan J. Melgar learn something unusual about the alleged killing of Osama Bin Laden by Seal Team 6?

If he did, he took the secret to his grave. Sgt. Melgar turned up dead last June 4 in the housing he shared with Seal Team 6 members at the US Embassy in Bamako, Mali.

Now two Seals from Team 6 are under investigation for murder — and speculation is swirling about the possible motive, including “whether Sergeant Melgar had stumbled upon some illicit activity the SEALs were involved in, and they silenced him, according to interviews with troops and their families.” (NY Times)

One of the most egregious examples of “illegal activity” would be the supposed killing of Osama Bin Laden on May 2, 2011 in Abbottabad, Pakistan. According to Seymour Hersh’s sources, the murdered individual said to have been Bin Laden was never positively identified by anyone, including the shooter who essentially shot the head and body into bloody pulp without any other team members having caught so much as a glimpse of the individual who was shot.

According to Hersh’s sources, the mess that remained of “Bin Laden” was bagged and dumped from a helicopter over the mountains. A ludicrous cover story about a supposed “burial at sea according to Muslim custom” was invented by idiot higher-ups, who perhaps did not realize that no such Muslim custom exists: Islam insists on land burial where at all possible.

Hersh’s sources claim that Pakistan’s ISI, which holds few if any secrets from CIA/NSA who created it, held Bin Laden under house arrest at the Abbottabad compound from 2006 onward, almost certainly with the full knowledge and complicity of the US government.

This scenario completely demolishes the official story of 9/11: If Bin Laden were really involved in 9/11, the US government would have put Bin Laden on trial and convicted him in a real, civilian court of law (not the kind of kangaroo court currently being used to lynch Khalid Sheikh Mohammad and other “9/11 conspirators”).  It wouldn’t have ordered the Pakistanis hold him under house arrest for five years!

Even more obviously, if Bin Laden were really the 9/11 ringleader, he would have been captured and interrogated, not killed. After all, the information he could provide could stop attacks and save lives!  (The same is true of all the other patsies who are summarily executed as “terrorists” — if they were real terrorists, every effort would be made to take them alive.)

But is Hersh correct in assuming that Bin Laden was really killed in Abbottabad? Hersh’s account, supposedly corroborated by people who were there, suggests that not the slightest effort was made to positively identify Bin Laden either before or after the execution! Instead, a single gunman blasted “Bin Laden” to smithereens, and nobody else saw anything but the human hamburger that was left…which was quickly disposed of.

Yes, something really happened in Abbottabad that night…but what it is ain’t exactly clear. Did Sgt. Logan J. Melgar find out what really happened—perhaps in drunken conversation with Seal Team 6 members—and pay the price?

There is good reason to think Bin Laden died in December, 2001, as Pakistani and Egyptian newspapers reported. David Ray Griffin’s short book Osama Bin Laden: Dead or Alive? shows that Bin Laden was innocent of involvement in 9/11, likely died of kidney failure in late 2001 and was buried in an unmarked grave (according to actual Salafi-Islamic prescription).

But Griffin’s hypothesis is not a fully-proven slam dunk, just a best guess. The only thing we know for sure is that the official story of the “Bin Laden killing,” like the official story of 9/11, is an obvious load of horse manure, riddled with internal inconsistencies and impossibilities.