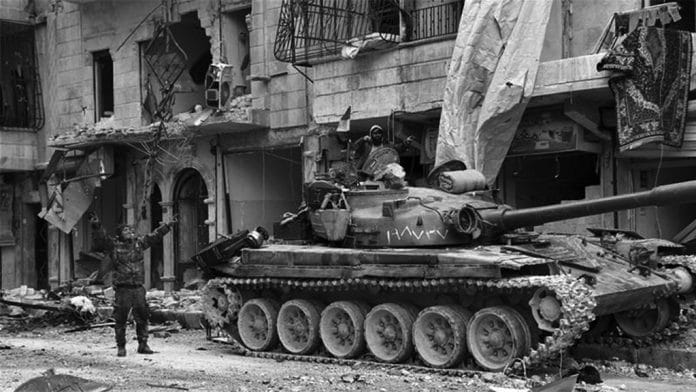 Syrian government forces are clashing with Hayat Tahrir al-Sham (formerly Jabhat al-Nusra, the Syrian branch of al-Qaeda) and ISIS in the northeastern countryside of Hama.

Separately, the SAA and the NDF advanced on the village of Abu Dali in northern Hama. It was captured by HTS on October 8.

The SAA and the NDF used clashes between Hayat Tahrir al-Sham (HTS) and ISIS in order to prepare and launch a limited military operation aimed at building a wider buffer zone west of the Ithriyah-Aleppo highway, which has been repeatedly attacked by militants over the last year.

In the city of Deir Ezzor, the SAA Tiger Forces, the Republican Guard and the NDF liberated worker district 1, worker district 2, Afri district and the stadium from ISIS terrorists. Government troops also advanced in the districts of al-Hamidiyah and Jbela.

At the same time, the SAA and Hezbollah attempted to push towards al-Bukamal from the direction of T2 Pumping Station. However, no significant success was achieved.

On October 28, the US-led coalition officially announced that it and the US-backed Syrian Democratic Forces (SDF) are working to consolidate their gains in the Omar oil fields and to advance on the ISIS-held border town of al-Bukamal at the border with Iraq.

The real goal of the advance is to attempt to prevent Syria and Iraq from restoring control over the Deir Ezzor-Baghdad highway.

As soon as, government forces establish full control over Faysh Khabur area, this goal will be achieved. Furthermore, Iraq and Turkey have already agreed to establish a Turkish-Iraqi border crossing using this area.

The successful operation of government forces to re-take contested areas from the KRG’s Peshmerga force came amid a rapid push towards the ISIS-held city of al-Qaim. This clearly demonstrated that the army and its allies have much more military power than the KRG’s leadership expected while it was starting their attempt to secede from Iraq.

On Sunday, the KRG’s President Masoud Barzani announced that he resigns from the presidency on November 1. This decision is a logical result of the recent failures of the KRG policy and a loss of large oil—rich areas to the federal government that started with the September 25 independence referendum held by Barzani’s government.