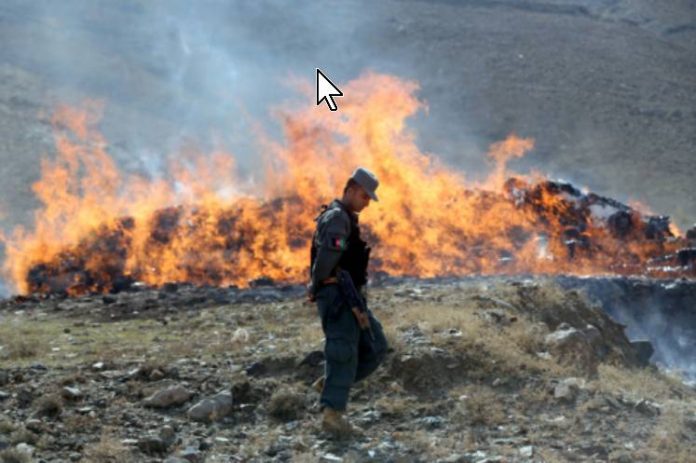 Afghan Writer and political Analyst based in Kabul

There were many more, besides Hanif Atmar, that seemed close to Dr. Ghani during the 2014 Presidential Elections; however, because of signing the Bilateral Security Agreement between U.S. and Afghanistan (BSA) and for having unique intelligence and experience, Hanif Atmar became [among] the highest ranking officials in the present Administration.

It is said that Hanif Atmar was given promise to become the next president as a result of the 2019 Presidential Election, in which, the entire team of Ghani was supposed stand behind him. Thus, at the first times, Hanif Atmar, alongside the head of the Unity Government (NUG), Dr. Ghani, was being introduced as the upcoming potential President in the international meetings.

On 21 September, 2017, after President Ashraf Ghani arrived in America; it seems that he would have given promises of far more cooperation to Americans and in return, some officials in the Donald Trump Administration would have acknowledged that Dr. Ghani would be President in the next elections as well. Hence, Dr. Ghani’s campaign teams reactivated; but, Hanif Atmar might not be satisfied with this job and he might want the Dr. Ghani’s team to fulfill the promises it made to him.

In-house challenges to Dr. Ghani where Atta Mohammad Noor in Balkh province and General Abdul Raziq in Kandahar province not only do not obey him but create obstacles in front of him as well. The government Cabinet is yet to be completed in Kabul, most of the ministers are acting-ministers, and there is a gap of President’s spokesperson is grasped where the acting-spokesperson is on duty.

President Ghani might plan to postpone the upcoming Presidential Elections for 10 months, the Britain might support this delay; yet, America wants the elections to become held on time.

Former President Hamid Karzai could be also a potential candidate for the upcoming elections  and would have the support of  Russia, China, Iran and Pakistan with himself.

Amongst the countries who have ties with the Taliban, Iran might be one of them, who might ask the Taliban not to make problems to the supporters of  Karzai. Iran and Russia would, perhaps, think that if Karzai, who is against the U.S. military bases, took power, he would ask the foreign troops to leave the country. It is what the Taliban also wants.

The U.S. has been uneasy with deteriorated security situation in Afghanistan; however, they become more concerned about security situation after armed opposition’s tens of rockets hit the Kabul Airport area when the U.S. Defense Secretary, James Mattis and NATO Secretary General, Jens Stoltenberg arrived in Kabul on 27 September, 2017. Therefore, the U.S. State Secretary, Tillerson arrived in an unannounced visit to Afghanistan and met the head of NUG, Dr. Ghani and CEO, Dr. Abdullah in the largest Foreign/ American military and air base located in Parwan province on 23 October, 2017.

Tillerson after meeting with high-ranking Afghan officials, U.S. embassy diplomat and American military general arrived in Iraq late this day (23 October, 2017). He met Iraqi leaders there and said that they cannot accept Iran’s interventions in Iraq and Syria. Before that, prior to Tillerson’s visit to Iraq, the religious leader of Iran, Ayatollah Khaminayee said that Iraq should not be fooled by America’s promises, and friendship with America is detrimental for Iraq.

On 24 October, 2017, after visiting Iraqi officials in Iraq, Tillerson arrived in Pakistan and met his Pakistani counterpart, Khwaja Asef and Prime Minister, Abbasi. Pakistan’s rude answer was not less than a surprise for the U.S. State Secretary. Pakistani officials told him that they do not need U.S. assistance. The aid that was made to Pakistan in past 17 years was for the interests of the U.S., itself, and the security of its logistic caravan to Afghanistan. Pakistan has spent the assistance back for the interest of the U.S.

Khwaja Asef, the Pakistani foreign minister told to Tillerson that they should not blame Pakistan for the U.S. failure in Afghanistan.

Pakistani officials told to Tillerson that our national interests have priority to us and the U.S. policy on empowering India and giving leverage to India in Afghanistan is not acceptable to them.

The meeting of American and Pakistani senior officials was full of tumult and was accusing each other of not cooperating in Afghanistan and was blaming each other for failure of the war in Afghanistan. Tillerson, then, arrived in India on 25 October, 2017. He met Indian Foreign Minister, Soshma Sawaraj and the Prime Minister, Narendra Modi. Tillerson, once again, threatened Pakistan from India.

In my (the writer) viewpoint, the U.S. policy on empowering India is not for Pakistan because India, without the assistance of America, is powerful than Pakistan and meantime, is an emerging economy. Pakistan has a long way in order to compete with India; however, the U.S. policy of empowering India is, perhaps, about preventing economic growth, and leverage of China in the region.

During, the Afghan war against the Soviet Union, Pakistan was responsible for the distribution of money and weapons and was responsible in his job, meaning that there was not that much corruption in money and weapons. The point is that, Pakistan was taking care of the U.S. interests during cold war between America and the Soviet Union. Again, during America’s campaign on Afghanistan, Pakistani President Parwiz Mushrraf preferred the U.S. interests.

If the U.S. wants long-terms presence of its 9 military bases in Afghanistan, it has a kind of obligation to be cautious in its relations with Pakistan because maintain military equipment to American troops from the Central Asia is not a trustworthy route.

Perhaps, the U.S. Defense Secretary would visit Pakistan in the near future and he would ask Pakistan to cooperate in implementation of the U.S. policies; and Pakistan knows better how to deal with America or Russia, and how to benefit from both sides when it comes to the on-going war in Afghanistan.

The U.S. State Secretary, Tillerson’s visit to Afghanistan, Iraq, Pakistan and India was also a knotty visit to the American officials.

Afghan politicians are required not to sacrifice the country on behalf or apparent disputes between America and Pakistan. The problem of Afghan politicians is that they do not know how to deal with super power countries; they prefer only difficult ways; however, Pakistan has always become benefited from other countries in the Afghan issue and has proof of cooperation and friendship with other countries.

Furthermore, the Afghan politicians should be aware not to become scapegoat of India-Pakistan, America-Russian, and Iran-Saudi Arabia interests; however, they should have a policy on cooperation and friendship with other countries in order to keep the independence of their own country. They should not victimize the Afghan nations for others/ foreigners interests as a result of execution of a specific country’s policy.

There were American generals who requested for the policy on severity of war; nonetheless, the U.S. media loudly reports that neither fathers nor their grandfathers could win the war in Afghanistan.

Now, the media, Democrats, civil societies and a portion of Republicans oppose the Trumps’ policy which includes Afghan War as well.

America, besides domestic problems, is faced important international challenges. Egypt, Saudi Arabia, France, Germany, Pakistan, Turkey and Iran send their representatives to Russia. The King of Saudi, Salman met Russian President Putin on October 5, 2017. China is also seemed cooperative in this bloc. Apparently, the mentioned countries are not content with the U.S. policies.

Military policy is not always wining, sometimes it fails; and the U.S. has such bitter and unsuccessful experience in Vietnam where their troops has an inglorious defeat in 1973; however, the U.S. generals think that they should always be the winners and still do not accept defeat of American troops in Afghanistan, inversely, they call them so brave.

If peace was not brought and the war became severed, and they Trump’s war strategy continued to become implemented in Afghanistan, perhaps Iran and Russia would show more sensitivity. Russia claims that unidentified airplanes transport unidentified armed men. There are rumors that pro-Iran militants might be in possession of the American and French weapons that were seized by ISIS during conflicts in Iraq, and there is a risk that these weapons would be reached to Taliban’s hands. If that happens, the Afghan war would become more complicated and elongated.