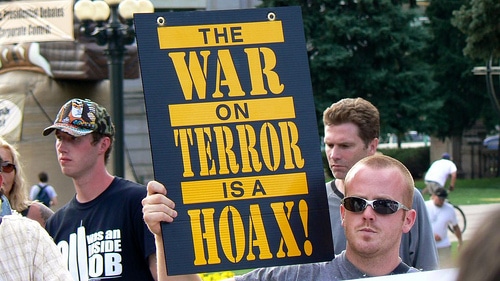 Did yesterday’s reported vehicular attack in Manhattan really happen? Almost certainly. Were people actually killed and injured? Very likely. So why am I calling this event a manufactured terror hoax?

Terrorism is a military tactic. Its definition is “attacking civilians to inspire fear.” This event certainly qualifies. So it is real terrorism, not fake terrorism, right?

Well, yes and no.

The general population is certainly being attacked and terrorized. But it is the media, and behind it elements of the government and ruling class, that are attacking us to elicit politicized fear. And the main weapon, the primary instrument of terror, is words and images, not motor vehicles (or knives, guns, bombs, or hijacked planes).

So let’s cut to the chase. The million dollar question, as always, is cui bono? Who gains? Somebody obviously wants us to fear Muslim immigrant Uber drivers. Who’s might that be? Is it “ISIS”—an organization created and sustained by elements of the US military-industrial-intelligence complex, whose prime beneficiary is the state of Israel?

The notion that we should fear Muslim immigrants is a ludicrous, insane, paranoid hoax. Over 100 people die every day in the US—about 40,000 every year—from vehicular fatalities. On October 31, 2017, eight of those vehicular fatalities were apparently caused by a crazed Uzbek immigrant. That is not even a blip on the radar screen of significant threats to life and limb.

But somebody wants you to think Muslims are very, very scary. Who might that be?

Obviously someone who doesn’t like Muslim immigrants. Donald Trump, maybe?

Trump has built a political career out of fear-mongering and hate-mongering against immigrants in general and Muslims in particular. He is already trying to politically cash in on this latest episode.

Or how about the Zionist-dominated mainstream media? They have been working overtime for decades trying to brainwash Americans into thinking Israel’s enemies are America’s enemies.

The liberal element of the MSM may be at war with Trump. They may be trying to insert apocalyptic Christian Zionist Mike Pence into the White House. But there is one thing Trump and the MSM agree on: Israel’s Muslim enemies must be demonized 24/7/365, whether subtly (as NYT/WashPo/CNN/MSNBC do) or unsubtly (as Trump/Fox/Breitbart do). And behind the scenes, the folks who create and stage almost every “radical Muslim terror plot” are working overtime to throw red meat, literally as well as the fake-blood-doused variety, to both varieties of Islamophobic beast.

So whether or not the alleged vehicular murderer may have been subjected to MK-ULTRA style programming, whether or not this or other events may have included crisis actors and exaggerated or fabricated mayhem, THIS EVENT AND ALL OTHERS LIKE IT ARE MANUFACTURED TERROR HOAX EVENTS because there is absolutely no reason we should fear the people the media and government want us to fear. The whole “terror” craze, from the 9/11 false flag to the 2017 Hallowe’en massacre and beyond, is a gigantic paranoid hallucination induced by the people who profit from it.

PS: Was last May’s Times Square vehicular homicide event staged? I doubt it, but some think so, including a police detective named Alex Scott. But whether the blood is fake or real, we know who the real Axis of Evil is, as historian James Hufferd explains below.

This I Think I Know, (And So Should You)’

At least to believe the media (and who does anymore? – certainly, fewer and fewer), the question on every American’s mind this star-crossed Hallowe’en night is something like: “How do the gossamer-thin ISIS/ISIL terror networks now covering and threatening nearly every country on the face of the earth (including apparently 53 out of 54 in Africa) manage to inspire amateur, would-be (or, never-thought-of-it before) jihadists in the U.S. to rent vehicles out-of-state in order to slam them into chockful bike paths (reminiscingly near the one-time Twin Towers and 7, quite coincidentally, I’m sure), killing at least 8 and wounding dozens more?

But, actually, I think I know what may have happened here – just as I thought, apparently correctly, in the more-splashy Las Vegas case a month ago. I chose deliberately to say “may have” and “think” because I have absolutely no direct evidence. But I don’t need direct evidence to conclude the overwhelming probability for my surmise, on the basis of 90 – 95% of such cases in which the genuine inspiration for the attack is conclusively revealed and traces straight back to the FBI-CIA nexus, the axis of the lion’s share of the world’s current baffling, radically-destabilizing wave of mass evil. (Throw in the Pentagon/Situation Room into that axis/nexus of iniquitous operations for good measure – to say nothing of the closely-linked deceptions, bald-face lies, and beyond-volatile anger and confusion generated).

True, this case involved vehicular homicide (the first such this side of the Atlantic, unless you count airplanes). But, otherwise, the only outstanding difference this time, as compared to most other state-sponsored-terror instances, is that the culprit, for some reason, didn’t die in dilecto. (Because the cops aimed poorly and missed his vitals?)

And, of course, another reason I know that 95 – 100% of these obscenities are not as advertised loud from the rooftops is that they don’t make any sense as real acts of insanity by Middle Eastern-inspired holy wackos. To wit: if such were behind such, they wouldn’t go after ordinary bike-riding regular Joe’s and Jo’s. Why would they? Their enemies, after all, sit in Congress, Parliament, the WH, the State Department, or Westmonster – not on bicycle seats or at hoe-down music fests on Hwy. 91. If they’ve seriously “had it”, why don’t they ever go after the crafters of the berserk policies they so much profess to hate? Can anyone answer?

So, my first assumption is that the FBI/FIB was the instigator here, as per usual, the real motive being to emphatically remind Americans to “stand back and let us do our business”, which is (in no particular order) a) of adding restrictions on and protections for us (the authorities/establishment) from you, in the process of preventing future kamikaze runs by vehicle renters, and b) either cheer us on or stand back as we bring as much death and mayhem as we want by whatever means we devise, on your dime, to make our favorite backers trillions nonstop by dint of arms in the Middle East, Africa, Southeast or Central Asia, Pluto, Bikini Atoll, or anywhere else we dream up, while scamming you into thinking we’re winning (for the first time since VJ Day and Granada, by the way) and making you all real safe.

And I might as well add – the greatest mystery in the world (to me) is if and how the parade of mostly young, exorbitantly-paid, impressively articulate, usually from Ivy League or Bryn Mar, foundation or think-tank experts – who have typically worked in 127 countries, impressively remaining alive on airplane food, for 16 years by the time they’re 28 – how these immaculate Ken and Barbie prodigies so young and brilliant you can almost smell them – can talk nonchalantly, convincingly, and in great detail for an hour, from close-up, personal experience, on various aspects of the official version, on the ground, of the “War on Terror”. Or, on the convicting pre-career of Oswald, the “lone gunman” (no other scenario ever being mentioned). Or, of the convoluted doings of the 19 with their box-cutters on 9/11.

I wonder. Do they route these cookie-cutter, out-of-the-woodwork, beautiful hair media instant-geniuses through Hollywood on the way up? (Or, are the rest of us just naturally smarter?)