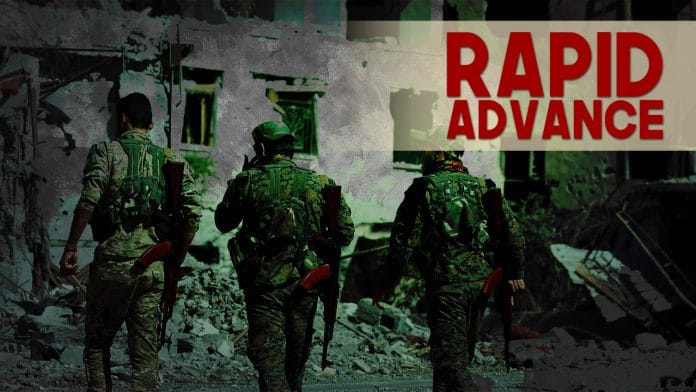 The ISIS-held area is rapidly shrinking in the city of Deir Ezzor. On November 1, the Syrian Arab Army (SAA) Tiger Forces and the Republican Guard liberated Jubaliyah neighborhood, the central park area, the school of law and education area and the southern part of Hamidiyah neighborhood.

Thus, over the last few days, ISIS has lost over 40% of the area that it had been controlling in the northern part of the city.

On November 2, the Tiger Forces and the Republican Guard advanced deeper in Hamidiyah engaging ISIS in an intense fighting. If the ISIS defense there collapses, the terrorist group will have no chances to resist further attacks of government forces any notable amount of time.

As soon as Deir Ezzor is liberated, the SAA and its allies will focus on clearing the rest of the western bank of Euphrates from ISIS.

On November 1, six Tu-22M3 strategic bombers flew over the territory of Iran and Iraq and carried out a massive strike on ISIS positions near the ISIS-held border town of al-Bukamal. The strikes destroyed outposts, ammunition and weapons depots belonging to the terrorist group.

Meanwhile, the US-backed Syrian Democratic Forces seized the villages of al-Akidat and al-Bakaara east of Deir Ezzor city. 29 ISIS members were reportedly killed in the clashes there. Now, the SDF fully encircled the ISIS-held town of al-Busarityah and cut off the only road that could be used by the SAA to reach it. Soon, the SDF will start storming the town itself.

Late on November 1, Israeli warplanes bombed a copper factory in Hisyah Industrial Area 30km south of Homs city. Local sources added that the factory was hit with 7 unspecified munitions. In response, the 72 brigade of the Syrian Air Defense Forces launched an unspecified ground to air missile at the Israeli warplanes. The missile exploded east of al-Qusayr city near the Syrian-Lebanese border. No hits were reported.

The 72 brigade of the Syrian Air Defense Forces is mainly armed with the old-fashioned Soviet-made S-75 air defense system.