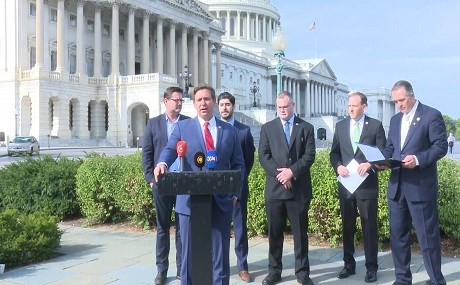 US Congressional representatives and others gather in front of the Capitol to support Kurds in Iraq.

WASHINGTON, D.C. – Several US congressmen including war veterans gathered in front of the Capitol to slam the presence of Iran-backed militias within the Iraqi Interior Ministry and call for more US State Department and White House support for Kurds.”A picture is worth 1,000 words. There’s the M1 Abrams tank with a Hezbollah flag. I don’t care what the State Department says, they can’t argue with this. At the best, the State Department has been derelict in its duties,” US Congressman Duncan Hunter, while holding up a photo of what he believes were Shiite militias on a US tank. “At worse they’ve been complicit.”

Many of congressmen and advisors who took turns talking on Wednesday emphasized that the State Department policy does not match how they see the facts on the ground.

Duncan cautioned that the decision to ignore Iranian influence in Iraq is ignoring a larger regional problem that would be a military corridor from Tehran to Damascus and “on Israel’s doorstep.”

“It’s time that we as Americans choose a side,” said Duncan. “And that side is freedom, and allies, and the Kurds.”

Duncan claimed that US President Donald Trump isn’t being informed by the top levels of Iran’s influence, while pointing to the photos of Hezbollah flags on US-made weapons in Iraq.

“I don’t think Secretary [James] Mattis has seen this picture of a Hezbollah flag on his M1 Abrams tank,” said Duncan.

“This president has had a tremendously effective instinct in making sure that we did not re-certify the Iranian nuclear deal and I hope now that he listens to his own instincts rather than the D.C.’s establishment when it comes to recognizing the insinuation of the Iranian influence in Iraq,”said Franks, who is a member of the House Armed Services Committee chairs the Missile Defense Caucus.

There has been speculation that the United States is backing Abadi because it prefers him to hold the prime minister post over other Shiite Alliance leaders like the previous Prime Minister Nouri al-Maliki.

“[Iraqi Prime Minister Haider al-] Abadi promised that we would not attack the Kurds weeks ago,” said Franks. “For him to break his word to the whole world does not speak well of his leadership.”

Others, including Rep. Lee Zeldin, noted that there are people in Iraq’s government who are influenced by Iran.

“It’s important for Abadi to take more leadership over his own government to reject this Iranian influence. The Iranians can’t help themselves, but to meddle all over the Middle East?” questioned Zeldin.

“Whether it’s the [Islamic Revolutionary Guard Corps’] activities, Qassam Soleimani is specifically leading that effort. It’s to support Assad in Syria or Hezbollah.”

Michael P. Pregent, who is foreign policy analyst and Hudson Institute fellow, supported that view going so far to say as Abadi has no control of the Iran-backed militias.

“That’s because they don’t answer to him [And Hadi al-] Amiri says it better than anybody else. He said that ‘The Hashd al-Shaabi do not answer to PM Abadi, they answer to me, and I answer to Qassam Soleimani, ‘” said Pregent, referring to Quds Force commander Soleimani The biggest problem I have as a veteran of this war and as former intel, is that these militias are actually under the ministry of interior.”

Congressmen Franks and others paid their appreciation for the Kurdish-American partnership in the invasion and in the ISIS war.

“The Kurds were the one group that did stand up. They stood up and they protected the Yezidis, they protected the Christians, and they did it without the Obama administration’s help,” said Franks, referring to when ISIS threatened to overrun all of Iraq. “Now this administration needs to stand by them and do what we can to maintain our commitment to that kind of courage.”

The Iraqi central government’s incursions into disputed or Kurdistani areas claimed by Baghdad and Erbil but under the administration of the Kurdistan Regional Government began about three weeks after the Kurdistan Region held a referendum to gauge support on independence from Iraq.

Since then, the Iraqi forces and Kurdish Peshmerga have had deadly clashes. The Iraqis have pushed the Kurds back to the 1992 line and aim to impose federal authority over the Kurdistan Region, which the KRG maintains is not constitutional under the 2005 Iraqi constitution.

The Kurdish government has since agreed to freeze the outcome of the vote and engage in dialogue with Baghdad within the framework of the 2005 constitution.

Masoud Barzani, who has been criticized for overreaching with the referendum, agreed not to extend his presidential tenure past Nov. 1.

“Tragically the only mistake Barzani has really made is unfortunately overestimating the American commitment to Kurds,” said Franks. “And that’s our fault, not his.”

As the war with ISIS wraps up, leaders have warned of what comes next in a region where power vacuums have bred extremism since the 2003 US invasion.

A former assistant to Trump, Dr. Sebastian Gorka, expressed that “Shiite terrorism” is the next threat in the Middle East after “Sunni terrorism” is defeated.

SOURCERudaw.net
ATTENTION READERS
Due to the nature of independent content, VT cannot guarantee content validity.
We ask you to Read Our Content Policy so a clear comprehension of VT's independent non-censored media is understood and given its proper place in the world of news, opinion and media.