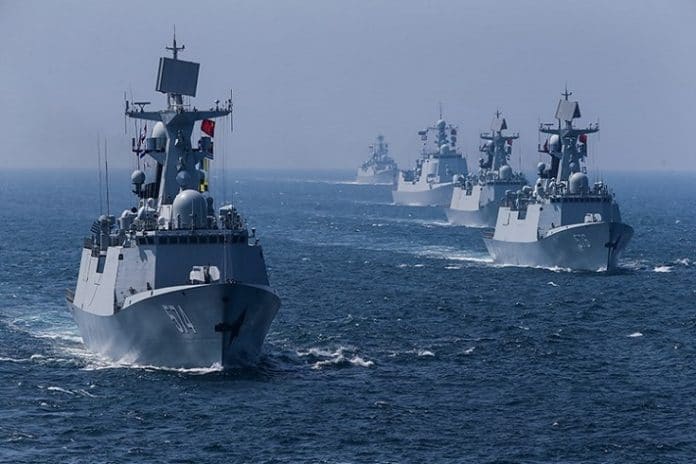 [ Editor’s Note: Mr. Sheikh brings us a good review of the evolving relationship between the US and China, or possible non-relationship, depending on how Trump plays his cards.

So far the US is over playing its hand once again with the Navy. Yes, it is big, maybe too big, as ships can’t help colliding and scandals keep reappearing of ships being sent to sea with serious problems with maintenance and training. That said, there is nothing really opposing the US Navy.

The Chinese are pushing ahead with their best option to blunt US sea power pressure, with its stationary aircraft carriers that it is building on the South China sea islands. They are much cheaper to build and maintain, but can also be taken out in the first day of a conflict without a clear defensive superiority.

The New Silk Road will cushion the threat of having its trade routes blocked by successful US Navy, and even a regional navy opponent force. The bonus with the overland route is the combination of the raw materials that can not only be discovered in the largely undeveloped central Asia areas, but can also be long term sources of sustained growth, something that the West will have difficulty doing as it has “matured”.

Hence, you see what is now an economic “forward deployment” push. A buried-in-red-ink US and West can only keep their house of cards afloat by gobbling up new assets on their perimeter, or…partnering with who the new economic giant is going to be.

And last, we will see how much real depreciation of trust there has been in having the US agree to anything, especially with Mr. Trump at the helm; and Mr. Sheikh reveals the shocking polls below. Is the damage reversible, or can it get even worse? … Jim W. Dean ]

After ditching the Trans Pacific Partnership (TPP) and giving a deadly blow to the’ US pivot to Asia, the US foreign policy vis-à-vis Asia remains in doldrums.

With the erstwhile partner countries negotiating to operationalize the TPP with or without the US, with China asserting itself both economically and strategically in the region through its BRI and on issues like North Korea respectively, with Russia firmly setting its foot in the geo-political heartland stretching from Eurasia to the Middle East, and with Afghanistan still remaining a deadlock between the US and the Afghan Taliban, challenges for the Trump administration’s foreign policy appear, keeping the administration’s so far performance in mind, appear too big to handle.

The crucial question is: what exactly will Donald Trump offer to its old allies to restore his country’s image as a ‘reliable ally’ that none other than Trump himself has destroyed? One visit, without a thorough reorientation, if not reversal, of the changes he has brought, would not be enough to reverse the damage American influence has received in the first year of Trump presidency.

There has been a sharp decline in how America is looked upon in the region. According to a recent Pew Research Center survey of 37 countries, global confidence in American leadership declined from an average of 64 per cent under Obama to around 22 per cent under his successor.

In Asian countries such as South Korea and Japan, America’s favourability plunged 71 per cent and 54 per cent respectively. In Indonesia, it suffered a whopping 41 per cent decline. This is nothing short of a soft power disaster, implying that the US will need a lot of heavy lifting to reverse this trend. But this is not going to be an easy task. A lot is happening in Asia, which is not at all favourable for such a reversal.

And most of what is happening in Asia owes its existence to Trump’s decision to pull the US out of TPP and allow China, its chief rival, to capture that economic space. As such, while the US president is all set to meet China’s Xi, the meeting would have entirely been different and the pressures on China would have been entirely different if the US president had been carrying on the banners of TPP. But this is not happening and what has happened is that China has resurged, putting the US under pressure in Asia, as also elsewhere (read: China is the US’ biggest trade partner).

Within Asia, China has been quick to capture the space left unattended by the Trump administration. Let’s take the example of Myanmar. When Myanmar began to reform in 2011, the then US president Barak Obama became the very first US president to visit the country and came back in 2014 as well, promoting stronger trade and security relations, and counted Myanmar’s opening as a foreign policy coup.

But that was that! Things have not only slowed down between the US and Myanmar ever since, but China has become more active in the country than ever as well. As such, when Myanmar’s Aung San Suu Kyi wanted to hold peace conference to end long running insurgencies in her country, it was China rather than the US that she looked towards and invited the country’s diplomats who not only had leverage over the rebels but also the ability to woo her into their orbit.

Ever since becoming the country’s de facto ruler, she has visited Beijing twice and skipped an invitation from Washington to attend a conclave of Southeast Asian foreign ministers organized by Rex Tillerson.

“I do believe that as a good neighbour China will do everything possible to promote our peace process,” she said during a visit to China last year. “If you ask me what my most important aim is for my country, it is to achieve peace and unity among the different peoples of our union.” Other countries, such as the Philippines and Thailand seem to be following Myanmar’s footsteps.

The change of heart in Myanmar and other countries vis-à-vis China and the latter’s involvement in Myanmar, as also elsewhere, strongly reflect the new policy that China’s Xi laid out recently in his speech last week. Unlike Deng Xiaoping, who was the architect of China’s economic reformation and set the country’s foreign policy on a non-interventionist course, Xi is pushing for a radical reversal, the hallmark of which is greater involvement, if not direct intervention, through development programmes such as BRI and CPEC.

And, China’s new economic plan, laid out by Xi Jinping in the 19th Communist Party Congress, only makes greater involvement not only a lot easier but also larger both by scale and depth. The news of this new economic plan has been received very cautiously by China’s regional rivals, such as Japan, who certainly feel perturbed by the prospects of a China officially expanding into other territories both economically and militarily.

It is in accordance with this imperative of capturing economic space that China is also revisiting its military policies, particularly with regard to its military modernization and overseas military presence. The promulgation to build a “world-class military” rivaling that of the US by mid-century is a resolve to drive the US military presence out of the Asia-Pacific region.

There is as such a big reason to worry for the US allies in the region. And, the natural reaction to this has been, particularly from Japan, an emphasis on building a US-led anti-China alliance, leading Japan’s Foreign Minister Taro Kono to announce that he intends to use the upcoming visit of US President Donald Trump to propose what might very easily be perceived as an alternative to China’s BRI.

He also said he wanted to set up top-level dialogue between Japan, the US, India and Australia in order for the four powers to promote free trade and cooperation in defence and security throughout the South China Sea, across the Indian Ocean and all the way to Africa—regions that directly concerns China’s security and economic interests.

All that is left for these countries, countries that include half-US-half-China allies and countries that are still US allies, is the foreign policy signs that Trump is expected to make during his maiden Asia visit. These signs do matter, and are going to define the US role in the region during the next few years.

What we, however, already know is that Donald Trump is going to skip the annual East Asia Summit, and the question that still needs an answer is: will this absence imply that the US, under president Trump, progressively conceding space to China, and speed up the process by which the half-US allies starting orbiting China more forcefully.