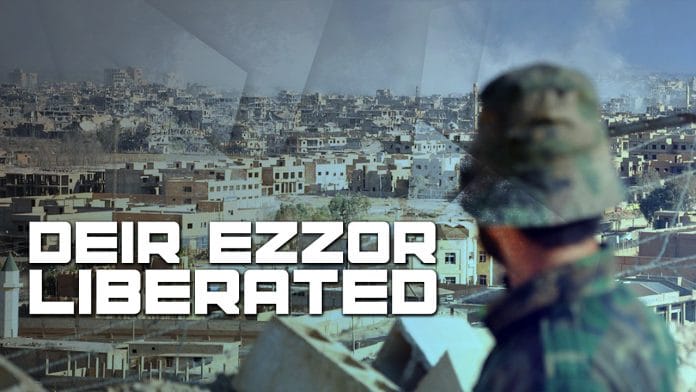 ISIS gave up the ghost in Deir Ezzor city after the Tiger Forces and the Republican Guard had liberated the key neighborhoods of al-Hamidiyah and Sheikh Yassin and advanced on the remaining ISIS positions in Ardhi and Rashdiyah.

On November 3, the SAA retook Uthaniyah and al-Hawiqah from ISIS and liberated the entire city.

The advance in Deir Ezzor came amid an intense fighting near Mahkan village southeast of the government-held town of Mayadin where ISIS has attacked the Syrian Arab Army (SAA). However, the terrorist group was not able to achieve any gains and lost 2 vehicles and at least 4 fighters.

On November 2, six Russian Tu-22M3 strategic bombers delivered the second strike in a row on ISIS targets near al-Bukamal destroying ISIS arms and ammunition depots, command posts and fortified areas near the town.

The strikes of the Russian bombers are aimed at destroying the ISIS defense facilities and stockpiles ahead of the upcoming storm of al-Bukamal by pro-government forces.

In the southwestern Aleppo countryside, clashes resumed between the SAA and Hayat Tahrir al-Sham (formerly Jabhat al-Nusra, the Syrian branch of al-Qaeda) in the area of al-Hass Mount. Initially, pro-government sources speculated that the military may attempt to reach Abu al-Duhur and the nearby airbase. However, this is unlikely amid an intense fighting in eastern Syria. Launching another big operation right now is a big risk for the Syrian government.

According to experts, the front between Hayat Tahrir al-Sham and the SAA will remain relatively calm if the terrorist group is not able to concentrate enough manpower and equipment for some banzai attack in the last attempt to shift the situation for its own benefit.

The so-called rebels lost their last chance to dominate in Syria after the total loss in the battle for Aleppo city.