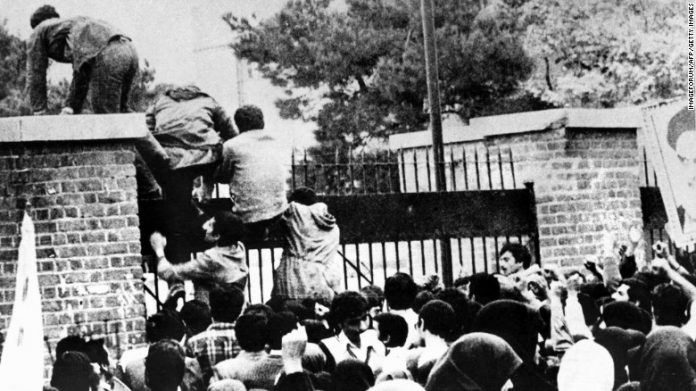 On this November 4th day in 1979, Student followers of the Ayatollah Khomeini send shock waves across America when they storm the U.S. embassy in Tehran. The radical Islamic fundamentalists took 90 hostages.The students were enraged that the deposed Shah had been allowed to enter the United States for medical treatment and they threatened to murder hostages if any rescue was attempted.

Days later, Iran’s provincial leader resigned, and the Ayatollah Khomeini, the leader of Iran’s fundamentalist revolutionaries, took full control of the country—and the fate of the hostages.Two weeks after the storming of the embassy, the Ayatollah began to release all non-U.S. captives, and all female and minority Americans, citing these groups as among the people oppressed by the United States government.

The remaining 52 captives were left at the mercy of the Ayatollah for the next 14 months.

President Jimmy Carter was unable to diplomatically resolve the crisis, and on April 24, 1980, he ordered a disastrous rescue mission in which eight U.S. military personnel were killed and no hostages rescued. Three months later, the former shah died of cancer in Egypt, but the crisis continued.

In November 1980, Carter lost the presidential election to Republican Ronald Reagan. Soon after, with the assistance of Algerian intermediaries, successful negotiations finally began between the United States and Iran.

On January 20, 1981—the day of Reagan’s inauguration—the United States freed almost $3 billion in frozen Iranian assets and promised $5 billion more in financial aid. Minutes after Reagan was sworn in, the hostages flew out of Iran on an Algerian airliner, ending their 444-day ordeal. The next day, Jimmy Carter flew to West Germany to greet them on their way home.

To be clear, like most things in our 20th century, the stories were  told from our U.S.A. perspective without asking the proper questions ie… why did they storm the embassy?  Where they just crazy or was something else behind it?

Over time, we are able to get out of our own fog and dig deeper to find a very long history of USA involvement in controlling the oil industry in Iran whilst destroying democracy and NOT investing in institutions that would make lives better for the average Joe or Mohammed.  The consequences of our national greed and gluttony have been disastrous both at home and around the world.

For those truly interested in how the USA got to the point where it’s embassy was taken over by students, study the SEVEN SISTERS.

In fact, it’s relevance is still with us now in 2017 as the Iranian challenge remains on the table; effervescent and persistent especially as U.S President Donald Trump continues to push the buttons for the profiteering oligarchs in charge.

Other Important Events on this Day in History;