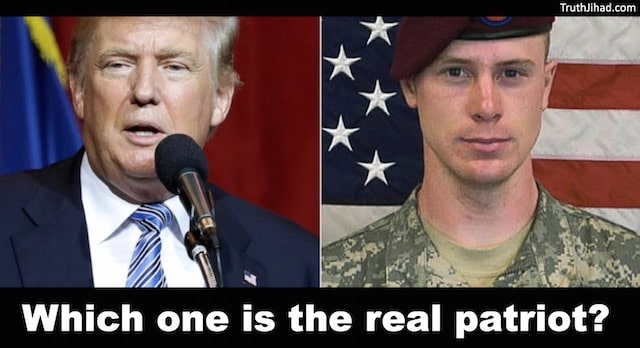 Donald Trump just tweeted that Sgt. Bowe Bergdahl should be in prison and it’s a “complete and total disgrace” that he isn’t doing hard time. Many people feel the same way about Trump.

I’m not talking about “Russia-gate.” That Establishment propaganda campaign demonizing Trump as a Russian agent is a joke, given the way other foreign interests, starting with the Israelis, totally own and operate our political system. Putin, who is pushing back against the unipolar NWO while trying to keep a lid on the crime oligarchs’ power in Russia, is more of a good guy than a bad guy.

VT has scooped the world in exposing the real Trump-Russia issue: organized crime. It isn’t Putin who has Trump in his pocket. It’s the Russian(-Israeli) mob.

Trump has been cavorting with mobsters for most of his adult life—and routinely doing business with them. (“The gambling industry” is a euphemism for money laundering.) There are many plausible reports of Trump hanging around with Jeffrey Epstein and raping underage girls, hiring prostitutes to urinate on beds the previous president slept in, behaving boorishly and perhaps criminally toward grown women, and generally engaging in the sort of excesses not untypical of arrogant wealthy men who move in organized crime circles.

So the “scumbag” part of “treasonous cowardly scumbag” would seem to apply to Trump, not Bergdahl. How about the label “cowardly”?

Bergdahl is accused of getting fed up with the horrific war crimes (and general idiocy) of the corrupt, heroin-centered Afghan war effort, leaving his base, and allowing himself to be “captured” by the Afghan resistance. Here is his final pre-defection email to his parents:

The future is too good to waste on lies. And life is way too short to care for the damnation of others, as well as to spend it helping fools with their ideas that are wrong. I have seen their ideas and I am ashamed to even be american. The horror of the self-righteous arrogance that they thrive in. It is all revolting. […] [Three good sergeants had been forced to move to another company] […] and one of the biggest shit bags is being put in charge of the team. […] [My battalion commander was] a conceited old fool. […] In the US army you are cut down for being honest… but if you are a conceited brown nosing shit bag you will be allowed to do what ever you want, and you will be handed your higher rank… The system is wrong. I am ashamed to be an american. And the title of US soldier is just the lie of fools. … The US army is the biggest joke the world has to laugh at. It is the army of liars, backstabbers, fools, and bullies. The few good SGTs are getting out as soon as they can, […] I am sorry for everything here. These people need help, yet what they get is the most conceited country in the world telling them that they are nothing and that they are stupid, that they have no idea how to live… We don’t even care when we hear each other talk about running their children down in the dirt streets with our armored trucks… We make fun of them in front of their faces, and laugh at them for not understanding we are insulting them […] I am sorry for everything. The horror that is america is disgusting. There are a few more boxes coming to you guys. Feel free to open them, and use them.[2]:4

It takes guts to face the truth. It takes guts to tell the truth. And it takes guts to leave the safety and security of a terminally corrupt US Army base and walk unarmed into Taliban territory. So whatever else you may say about Sgt. Bergdahl, he definitely is not a coward. Its the guys who save their own asses by nodding and winking at the war crimes going on all around them who are the cowards.

And Donald Trump is the Coward-in-Chief.

What is it about America that we keep electing chicken-hawk draft dodgers? Bush II avoided real service through a National Guard sinecure —which ended due to (a) a cocaine bust, and (b) his coke-addled inability to fly a plane. (Yes, the correct answer is “both of the above.”)

Dick Cheney is an even more disgusting chicken hawk. He enrolled at the University of Wisconsin just in time to get a student deferment. The minute they started drafting unmarried students (but not married ones) he married Lynne. Then when they started drafting married students with no children he immediately conceived his first child. That’s right: “Cheney’s eldest daughter, Elizabeth Cheney, likely owes her very existence to her father’s avoidance of the Vietnam draft.”

And Donald Trump, we all know, dodged the Vietnam draft because he was rich enough to pay a doctor to say he had a “bone spur” in his foot.

Whatever else you say about John McCain, the proverbial songbird of the Hanoi Hilton, son of the treasonous Admiral who covered up the USS Liberty massacre for Israel, good friend and patron of ISIS, etc. etc. … at least McCain had the guts to risk being shot down over Vietnam (which of course is not exactly an admirable display of courage since he did it as part of a holocaust against the Vietnamese people).

But Trump didn’t get his “bone spur” deferments out of principled resistance to the Vietnamese holocaust. On the contrary, he would have happily incinerated Vietnamese people, or anyone else, as long as he didn’t have to risk his own sorry narcissistic-psychopathic ass.

So it is Trump, not Bergdahl, who stands convicted of cowardice.

And how about the final count in our indictment—treason?

Sgt. Bowe Bergdahl was courageously defending the highest ideals of the American Republic when he walked out of that Army base in Afghanistan. All of the American Founding Fathers would have done the same thing. After all, the USA was born in a rebellion against Empire. We are the most congenitally anti-imperialist nation on earth. Even the notion of a Standing Army (not to mention an income tax to support it) was anathema to the Founders. They would be rolling over in their graves if they could see how their descendants have repeatedly committed the supreme war crime by invading sovereign nations like Afghanistan, establishing 900 military bases all over the globe, and generally behaving like the British of 1776 only several billion times worse.

And then there is the small matter of the Bill of Rights, the living heart of our Constitution. Or at least it was living, until the architects of the Afghan and Iraq wars blew up the World Trade Center and murdered it.

Trump already knew on September 11th, 2001 that it was an inside job, that it wasn’t “hijacked planes” we saw, that buildings could not fall down that way without explosives.

And yet since then he has kept his mouth shut. He has not gone after the perpetrators of this atrocity, or the series of atrocities that inevitably followed. On the contrary, he is ratcheting up the atrocities. He intends a tenfold increase in America’s stock of nuclear weapons. He has massively escalated the criminal invasion-occupation of Afghanistan. He is setting the stage for Netanyahu’s war with Iran, which would be a vastly bigger disaster than the debacle in Iraq.

Trump has uttered nary a peep about exposing 9/11 and restoring Constitutional governance. He has never said a word about Israel’s dominance of the US political system and media. Like the rest of the political class in Washington, DC, Trump has committed treason, is committing treason every day, against the Constitution of the United States of America.

So please join me in a truly patriotic battle cry:

Trump AND Hillary for prison!