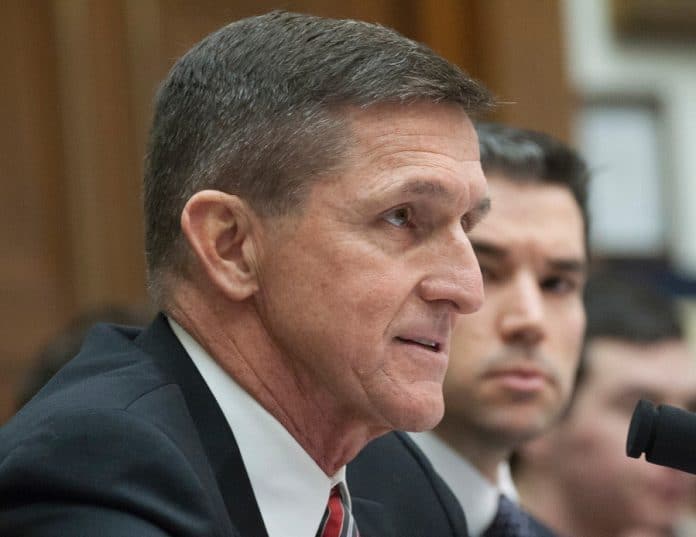 [ Note: VT was all over this story eight months ago, that Flynn had stepped into the doo doo big time, not so much for the minor speaking fee from the Russia Today anniversary event during the campaign, but the much larger $530,000 from Turkey given to his new lobbying firm, The Flynn Intel Group.

But NBC News is reporting today that federal prosecutors have gathered enough evidence to press charges against former national security adviser Michael Flynn and his son.

The news does not specifically claim the charges pertain to any Russian election meddling. We saw only this week the arrests of Trump campaign chairman Paul Manafort and Mr. Gates for their lobbying work in Ukraine and the laundering of millions made during that work.

As I wrote back on March 11th, “No government [Turkey] pays out sums like a half million dollars [$530K], even through a middleman corporation, for open source intelligence to be done via a former Defense Intelligence Agency director. The idea of it in this case was ludicrous.”

When Flynn was forced to file retroactively as a foreign agent for Turkey, he stated he was hired “to collect information” on Fethullah Gülen, the cleric who Erdogan was willing to do anything to get his hands on due to suspicion of his involvement in the bloody Turkish coup.

Turkish Intelligence has a history of being an active “wholesaler” of espionage in the US, keeping what it can use and selling off anything else to others to help fund its operations. But it also has a history of offensive operations involved in harassing Kurdish dissidents in the West, and even suspicion of murdering them, something commonly done during the Cold War that many claim continues.

A rookie counter intelligence agent could reasonably suspect that Turkey’s reaching out to Flynn, with his Special Ops background, could have been motivated by looking for insider assistance in renditioning Gulen out of the US.

‘VT, in a major investigation of financial interrelationships between Russian and Turkish “oligarchs,” really gangsters running the world’s largest criminal underground, have identified many of those connected with Trump’s “rise from the ashes” after his financial collapse in the late 1980s as fronting for Turkey’s Erdogan family. VT has identified Erdogan himself as one of the biggest criminal forces in the world.’

Gordon quotes none other than ex-CIA director James Woolsey, who arrived late to one of the meetings with General Flynn and the Turks, September 2016, and claimed that those present discussed sending Fethullah Gulen, a Muslim leader who Erdogan has accused of being behind a failed military coup to overthrow him, back to Turkey to face charges — possibly outside the legal US extradition system.

Those are not my words, but Woolsey’s. While the claims of evidence of Trump-Russia collusion to help his campaign have been voiced by major US Intel agencies, no proof has yet been laid on the table.

Leaks coming out of Mueller’s investigation are going to hurt it if they continue, possibly giving Trump an opening to dismiss him on the grounds that he cannot control his investigators. I think both might be walking a knife edge now, along with others, and they all know it. See the links at the end of the article to VT early coverage on this story… JD ]

A team of federal investigators led by Special Counsel Robert Mueller have gathered sufficient evidence to charge Michael T. Flynn and his son Michael G. Flynn, as they carry out a probe into alleged collusion between Trump aides and Russian actors, NBC Newsreported on Sunday.

Lt. Gen. Michael T. Flynn served as Trump’s national security adviser for just 24 days until he was forced to quit due to accusations he had contact with Russia’s ambassadorto the US and misled Vice-President Mike Pence about the conversations.

The sources reportedly told NBC that investigators are examining Flynn’s lobbying contacts and exploring possible charges of money laundering and lying to federal agents.They are also investigating whether he attempted to orchestrate the extradition of Fethullah Gulenfrom the US to Turkey in exchange for millions of dollars.

Mueller’s investigation, which is being carried out on behalf of the US Department of Justice, has already indicted three members of Trump’s campaign team.  They are former campaign manager Paul Manafort, and former campaign aides Rick Gates and George Papadopoulos.

Exclusive: ISIS, the Mob and Trump, More History than we knew