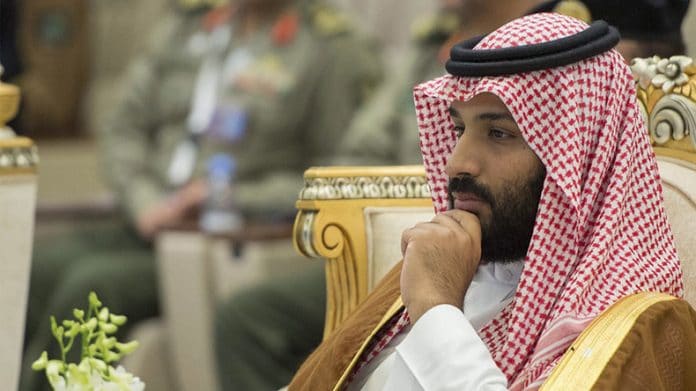 [ Editor’s Note: There had been hints that this was coming. Will it be a shuffling of chairs on the Titanic? We will need to know more.

One of the intriguing possibilities could be that the Crown Prince may be unhappy with the disastrous policy of the proxy terror wars; and Yemen and the Saudi-Israeli plan to take Iran down boomeranged on them.

Those targeted by the terror twins and the Neocon colonialists have forced those they have targeted to form a mutual defense force which now has a lot of experience in fighting terrorism; and they are intimately aware as to who the driving forces have been.

There has been no political blowback in the US, despite the huge duckblind the US is presenting, as being involved in anti-terrorism when terrorism has become the US’ “go to” tool for regime change. And gosh, it all got put on steroids right after 9-11, imagine that.

We will have to see the bios of those Saudis who are replacing those who have been arrested. Is this a real corruption purge, when the country is corrupt to the bone, or a political purge in disguise?

If it is the later, we will be reading the tea leaves to see what the new direction could be. That Lebanon’s Hariri actually flew to Saudi Arabia to resign was an unprecedented groveling, even for the Mideast.

Those being arrested have enough offshore money to fight back if they are being lynched, so we should be hearing their side of it. But even if they are guilty as hell, we will mostly certainly learn what innocent lambs they are, or we might even see them spill the beans on others.

My bet now on the front end of this is the King and Crown Prince team are clearing out opposition they will know will want to undermine changes they want to make. So they are demonstrating to these opponents that, since the entire country is corrupt, bringing corruption charges is mere child’s play.

They can be separated from their assets in a jiffy, to help out with the budget shortfalls and maybe even lose their heads. This is a lit dynamite stick here folks … Jim W. Dean ]

The decree appoints the crown prince, Mohammed bin Salman, to lead the committee, granting it broad powers to fight corruption. The committee is exempted from “laws, regulations, instructions, orders and decision” while performing its wide range of duties, namely “identifying offenses, crimes, persons and entities” complicit in corruption, and gives it the power to impose punitive measures on those caught red-handed. Those include asset freezes, travel bans and arrests.

The committee made its first arrests hours after it was created, detaining 11 princes, four current ministers as well as “tens” of ex-ministers of the Saudi government in connection with newly opened corruption probes, Al-Arabiya reported.

Dozens of former ministers were arrested by the Crown Prince committee, including a former governor of Riyadh province, former finance minister, and former chief of the Royal Court.

The committee said it is relaunching a probe into the devastating floods that killed over 120 people in the city of Jeddah in 2009, while inflicting millions in property damage. In wake of the wide-ranging investigation, concluded in December 2014, the Saudi court found 45 people guilty, including senior officials, on charges of bribery, misuse of power and public funds, money laundering and illicit business operations.

Another high-profile case resumed by the anti-corruption committee is the investigation into the outbreak of the so-called Middle East Respiratory Syndrome (MERS) virus in Saudi Arabia in 2014, which resulted in nearly 300 deaths and the ouster of the country’s health minister.

Most senior Saudi officials in charge of state oversight, investigation and prosecution will sit on the committee, which will comprise the attorney general and the heads of state security, anti-corruption authority, audit bureau, and the chair of the monitoring and investigation commission.

“In view of what we have noticed of exploitation by some of the weak souls who have put their own interests above the public interest, in order to illicitly accrue money,” the Saudi King said in a statement, explaining the need to form the body.

Crown Prince Salman, appointed the heir of the Saudi throne in June, is known for his reform-minded views. The prince, who held a number of key government positions even before his elevation, is said to be behind a series of the latest domestic reforms in the ultra-conservative country, loosening a grip on the state’s strict social laws.

In one of the latest policy moves, the Saudi government lifted a ban on women driving. Crown Prince Salman reportedly spearheaded the milestone policy change, persuading his father, the king, to review the restriction. Earlier, women in Saudi Arabia were also permitted to use state services without male guardians.

The prince hinted last month that he would not stop at that, promising a return from hardline interpretation of the religion to what he described as “moderate Islam,” while vowing to eradicate extremist beliefs inside the country.