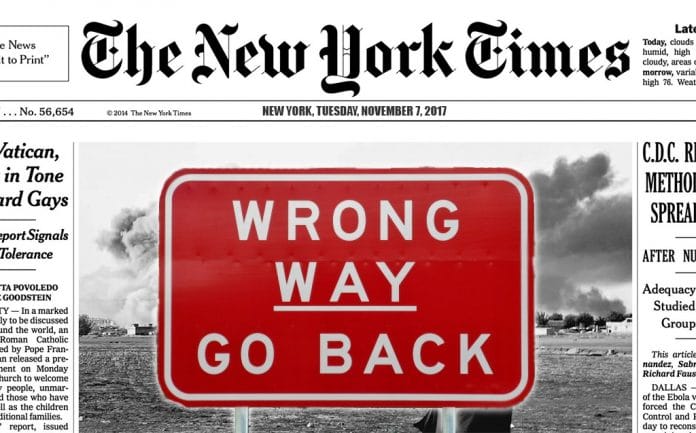 Who would ever be nostalgic for the old Soviet Union where truth was what the official government mouthpiece told you and everything else was a lie meant to undermine the state?

Whoever that might be, they would feel at home in the now totally neoconized U.S. where the old mainstream media marches in lockstep with a dysfunctional federal bureaucracy; to aggressively narrow freedom of speech and label anything that contradicts their ideological view of reality as enemy propaganda.

From 1918 until its demise in 1991, the Russian people at least knew that Pravda (Truth) was the official newspaper of the Communist Party of the Soviet Union. But what most Americans would be surprised to learn is that The New York Times has been operating for decades as the U.S. government’s Pravda without anyone being the wiser.

Now the truth-war rages between the old mainstream media outlets like The New York Times and any news operation or website that puts out any story challenging their version of the official truth. Even Facebook and Google are under attack. Much to our surprise we were recently drawn into this battle by a New York Times Obituary for our dearest Afghan friend, Sima Wali who fled the violent Marxist coup in 1978 that kicked off the U.S.-backed rise of Islamic extremism and the Soviet invasion of Afghanistan.

Considering that the Times maintains that the alternative media is filled with false news and Russian propaganda, we were shocked to find that there were many claims made in Sima’s obituary that contained American Cold War propaganda about Afghanistan that have long since been debunked as fabrication! One particularly outrageous example came with the claim that in 1978 “gender apartheid” had been “imposed by the Communists and then by the Taliban.”

Apparently The New York Times believes it can turn day to night by blaming the Communists for introducing “gender apartheid.” Gender apartheid was the name adapted (from the South African apartheid regime) in 1996 to draw the public’s attention to the cruelty and human rights abuses imposed by the Taliban on the women of Afghanistan. It was not imposed by the Communists after their takeover in 1978. In fact, quite the opposite was true.

As Sima stated in the introduction to our book Invisible History: Afghanistan’s Untold Story, “The draconian Taliban rule stripped women of their basic human rights. Their edicts against women in Afghanistan led to an introduction of a new form of violence termed “gender apartheid.” In point of fact a major cause for the growth of the resistance to the Communists in the more tradition-bound countryside was the forced education of women and girls and the forced removal of the veil. Nor is it understood in the West that these reforms had been attempted by many Afghan rulers in the past with some level of success.

Related Articles  Sima Wali obituary | theguardian.com  What Have They Done to Our Fair Sister? by Paul Fitzgerald and Elizabeth Gould | VT

As David B. Edwards writes in his book Before Taliban , there is actually a direct line between these and other reforms to the reforms mandated by King Amanullah after 1919. He writes, “The transformations that he [Amanullah] sought to bring about before his overthrow in 1929 were in many respects forerunners of those of the Marxists and were particularly revealing of the problems they later encountered.”

An accurate picture of what was being done by the Communists during their rule in the early 1980s can be read in Jonathan Steele’s 2003 Guardian article Red Kabul revisited in which he compares the U.S. occupation of Kabul in 2003 with Soviet occupied Kabul of the 1980s. “In 1981, Kabul’s two campuses thronged with women students, as well as men. Most went around without even a headscarf. Hundreds went off to Soviet universities to study engineering, agronomy and medicine.

The banqueting hall of the Kabul hotel pulsated most nights to the excitement of wedding parties. The markets thrived. Caravans of painted lorries rolled up from Pakistan, bringing Japanese TV sets, video recorders, cameras and music centres. The Russians did nothing to stop this vibrant private enterprise.”

Prior to 9/11 Laili Helms, a spokeswoman for and defender of the Taliban and niece to former CIA director Richard Helms, went so far as to diss educating women as a Communist plot, claiming that any Afghan woman who could read had to be a Communist, because only the Communists had educated women.

After the American invasion of Afghanistan in late 2001, Sima Wali was outraged by this Taliban mentality that she saw creeping into the American-installed Afghan leadership with the blessing of the American government. In an address to the Global Citizens Circle in Boston in 2003 she stated her objections clearly: “[A]s an Afghan and an American I will testify to you that the argument against women’s rights is neither Afghan nor Islamic!”

Thirty four years ago last May I stood before the irate Afghan press officer for the “Communist” government in Kabul, Afghanistan as he threw down a copy of The New York Times onto his desk. “Have you read this,” he demanded, pointing to an article by Leslie Gelb, titled “U.S. Said to Increase Arms Aid For Afghan Rebels.” What Gelb, The New York Times national security correspondent and former Carter administration Assistant Secretary of State had disclosed, angered the foreign ministry’s press secretary Roshan Rowan, and as an American he was holding me responsible. “Why are you doing this to us?” He shouted. “What is it we have done to you, to deserve this invasion?”

I didn’t need to rely on The New York Times to tell me what was going on in Afghanistan. As the first American journalist to risk the wrath of the Reagan administration’s newly installed neoconservative foreign policy by bringing a news crew to Kabul in 1981, I was one of only a handful of Americans who knew the score. The United States was backing Muslim guerillas that were burning down schools, specifically for girls and killing local officials regardless of whether they were Communist or not.

The Gelb article made clear that in collaboration with the Saudis, Egyptians, Chinese, Iranians and Pakistanis, the “bleeders” inside the Reagan administration were upping the ante in order to “draw more and more Soviet troops into Afghanistan,” while at the same time claiming to pursue “a negotiated settlement to the war.” It was not obvious from the Gelb article how the United States could be escalating a conflict in Afghanistan in 1983 while at the same time negotiating a settlement. Also missing from the article was any indication that the administration’s policy was a fundamental contradiction.

That spring of 1983 we had invited Roger Fisher, director of the Harvard Negotiation Project to return with us to Kabul to unwrap this riddle of why the UN negotiations were getting nowhere. Contracted to ABC Nightline, Roger met with the Kremlin’s chief Afghan specialist who’d flown down from Moscow and told him point blank, “We want to get out. Give us six months to save face and we’ll leave the Afghans to solve their own problems.”

Upon his return Roger expected his discovery would be greeted with relief. Instead he found that “negotiated settlement” was only a fig leaf for escalating the war. The mainstream media was just beginning to ramp up a propaganda campaign, which would become known as Charlie Wilson’s War, to drive support for keeping the Soviets pinned down in their own Vietnam while bleeding Sima Wali’s Afghanistan to death.

The American people expect the full story from their “free press” and the Constitution demands that the press serve the people and not the bureaucracy. The New York Times needs to get its mission straight lest it sacrifice its credibility to the very thing it claims to stand against. Left wing Afghan Communists cannot be magically transformed into right wing Pakistani Taliban. The United States is not the Soviet Union and The New York Times should stop behaving as if it is Pravda.