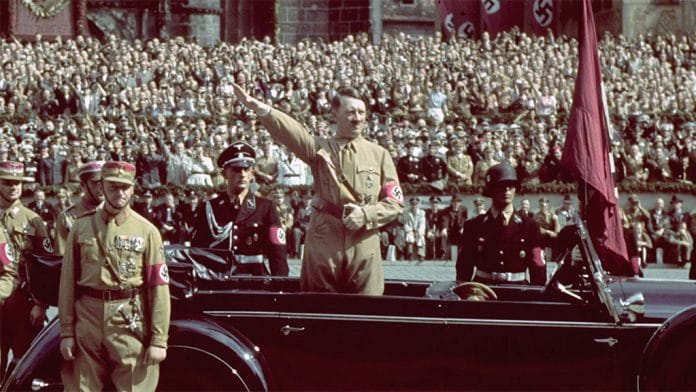 On this day 8th day of November in 1939, on the 16th anniversary of Hitler’s Beer Hall Putsch, a bomb explodes just after Hitler has finished giving a speech. He was unharmed.Hitler had made an annual ritual on the anniversary of his infamous 1923 coup attempt, (Hitler’s first grab at power that ended in his arrest and the virtual annihilation of his National Socialist party), of regaling his followers with his vision of the Fatherland’s future.

On this day, he had been addressing the Old Guard party members, those disciples and soldiers who had been loyal to Hitler and his fascist party since the earliest days of its inception. Just 12 minutes after Hitler had left the hall, along with important Nazi leaders who had accompanied him, a bomb exploded, which had been secreted in a pillar behind the speaker’s platform. Seven people were killed and 63 were wounded.

The next day, the Nazi Party official paper, the Voelkischer Beobachter, squarely placed the blame on British secret agents, even implicating Prime Minister Neville Chamberlain himself. This work of propaganda was an attempt to stir up hatred for the British and whip the German people into a frenzy for war. But the inner-Nazi Party members knew better—they knew the assassination attempt was most probably the work of a German anti-Nazi military conspiracy.

In an ingenious scheme to shift blame, while getting closer to the actual conspirators, Heinrich Himmler, the Gestapo chief, sent a subordinate, Walter Schellenberg, to Holland to make contact with British intelligence agents. The pretext of the meeting was to secure assurances from the British that in the event of an anti-Nazi coup, the British would support the new regime.

But Himmler wanted more than talk—he wanted the British agents themselves. So on November 9, SS soldiers in Holland kidnapped, with Schellenberg’s help, two British agents, Payne Best and R.H. Stevens, stuffing them into a Buick and driving them across the border into Germany.

Himmler now proudly announced to the German public that he had captured the British conspirators. The man who actually planted the bomb at their behest was declared to be Georg Elser, a German communist who made his living as a carpenter.

While it seems certain that Elser did plant the bomb, who the instigators were—German military or British intelligence—remains unclear. All three “official” conspirators spent the war in Sachsenhausen concentration camp (Elser was murdered by the Gestapo on April 16, 1945—so he could never tell his story). Hitler dared not risk a public trial, as there were just too many holes in the “official” story.