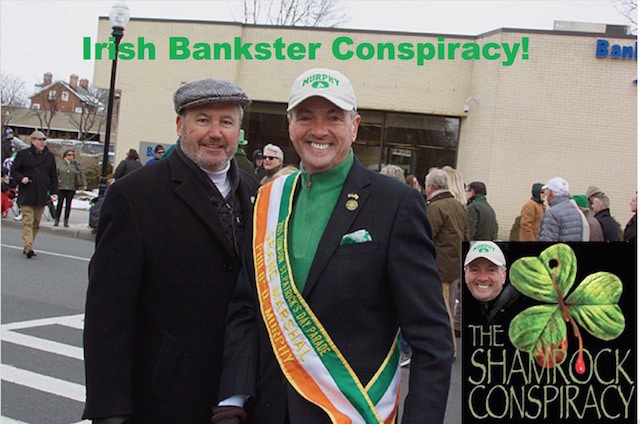 Is Phil Murphy part of an Irish conspiracy to take over international banking and establish a New World Order based in Dublin?

That is the contention of far-right websites spreading thinly-veiled anti-Hibernianism in the wake of Murphy’s upset victory in the New Jersey governor’s race. Murphy, a former Goldman Sachs bigwig, has turned against his Rothschild mentors and now advocates “public banking,” which critics see as a smokescreen for an Irish-bankster-driven world takeover project.

“When every single ex-Goldman Sachs politician who wins a major governor’s race on a public banking platform just happens to have an Irish surname, you can’t tell me that’s just coincidence” said Wilbur Wiggowitz of IrishWatch.com. “Obviously the Irish totally dominate the public banking advocacy industry, just like they’re overrepresented in other key sectors including stout manufacturing, house painting, and anti-British agitation. They also have tremendous influence in the entertainment industry—Directors John Ford and Clint Eastwood, actors James Cagney and Sean Penn, and whole armies of waiters, dishwashers, cabdrivers, extras, second-rate stand-up comics, and alcoholics are just a few of the Irish names that totally dominate Hollywood. Gilad Atzmon says Jewish power is the power to suppress discussion of Jewish power. Well, these Hibernians are so powerful that nobody even knows about their power. Now THAT is power!”

Wiggowitz added that at least one or two women of Irish ancestry are even said to have fought back successfully against Harvey Weinstein’s rape attempts. “Wow! When you can do that to a guy like Weinstein and live to tell the tale, you’re obviously a member of a pretty formidable group,” he said.

The Anti-Defamation-of-Hibernians Division (ADHD) of the Anti-Defamation League (ADL) responded with a press release debunking the bigots. “These claims that Irish people have any power whatsoever in banking, media, and politics are are totally unacceptable, and should never be uttered or whispered except in your very lowest voice, even if they are true,” said A.B. O’Foxman, Chieftain Emeritus of ADHD. He added that nobody should ever criticize the Hibernian-Zionist movement, which seeks to invade, occupy, and ethnically cleanse Israel in order to create an apartheid Irish State there, because to do so would reveal the critic as a vicious anti-Irish bigot and likely denier of the Potato Famine Holocaust.

Meanwhile Facebook, Twitter, and Youtube have announced a multi-billion dollar campaign to purge the internet of anti-Hibernian bigotry. Comments like “The only reason the Irish support public banking is because they think they’ll get easy-money loans for their drinking binges” are now being deleted almost as fast as they can be posted, while hundreds of revisionist books on the potato famine have been banned by Amazon.