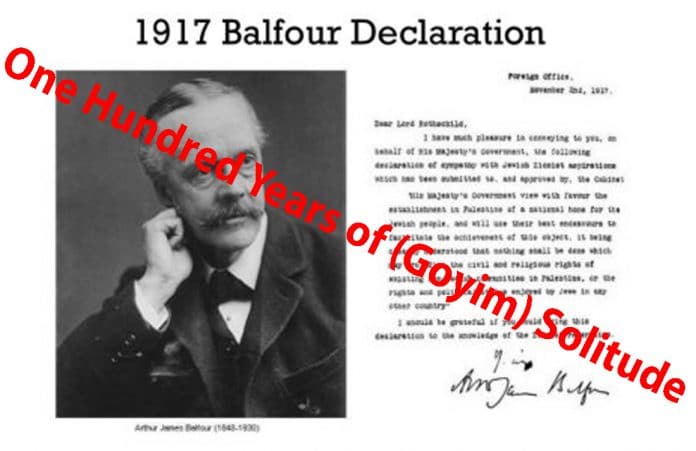 A talk given at Keep Talking gathering in London,  7 November 2017

In Heidegger and the Jews, the French philosopher Jean-Francois Lyotard points out that history claims to narrate the past but, in practice, what it does is conceal our collective shame. The Americans conceal slavery and imperial genocidal aggression, the Brits conceal their colonial blunders, the Jews turn their eyes away from anything that may have contributed to turning  Jewish history into an extended shoah. The real historian, claims Lyotard, is there to unveil the shame. This week marks 100 years since the Balfour declaration and today I will try to touch upon your shame, my shame, our shame. We will try to figure out what the history of the so-called  Balfour ‘Declaration’ is there to conceal.

Let’s first examine the document. Most noticeably the so-called ‘declaration’ is not printed on official British government letterhead. It is not signed by the British cabinet either. It is, instead, a letter from a sleazy British politician  (Foreign Secretary Arthur Balfour) to a very rich Jew (Lord Walter Rothschild). As such, the Balfour ‘declaration’ is actually a statement  with somewhat limited significance.  What it does is  “declare[s] sympathy with Zionist aspirations.” Yet, we must admit that the Jewish world has managed to squeeze quite a few drops of juice out of this watery statement. The Jewish world interprets this ‘sympathetic declaration’ as a commitment to their Zionist, racist and expansionist project namely the ‘Jewish State’. They claim to regard the vague statement as a license to ethnically cleanse the entire indigenous people of the land, i.e., the Palestinians. And, as if this is not enough, the British PM Theresa May has evidently bought into the most radical Zionist interpretation of the declaration.

May announced last week that she was “proud of our pioneering role in the creation of the state of Israel.”

Let me share some of the awkward history of the Balfour Declaration with you. The ‘declaration,’ as we now understand, was actually drafted and approved by British Jews before it was sent to Lord Rothschild.

The National Library of Israel reveals the flowing:

“Before the declaration was officially presented to Lord Rothschild by Lord Balfour, the draft was presented to Jewish leaders of every political stripe, both Zionist and non-Zionist. One of these leaders was Sir Philip Magnus, a Reform rabbi and British politician whose opinion on the declaration was sought.” (http://web.nli.org.il/sites/NLI/English/library/reading_corner/Pages/balfour.aspx)

Herbert Samuel, the British first High Commissioner of Palestine who served between 1920 and 1925  was an avid Zionist Jew and a close acquaintance of Chaim Weizmann, the leading pragmatic Zionist, the spirit behind the ‘declaration’ and later the first Israeli president.   How did the Zionists managed to plant a Zionist Jew in such a crucial and sensitive position? The answer is devastatingly simple. They were running the show.  We are talking here about Jewish domination of the relevant British foreign affairs as early as the beginning of the 20th century.

But was it really ‘The Jews,’ Moshe, Yaakov, Sarah who dominated British  Middle East affairs? Unlikely. It is more reasonable to assume that the fate of the empire and its decisions were in the hands of just a very few powerful Jews,  people like Lord Rothschild to whom Balfour actually addressed the declaration.

This tale of Jewish political domination extends well beyond the borders of Britain. In his invaluable book, The Pity of it All, Israeli historian Amos Elon suggests that the 1917 Balfour Declaration was at least partially motivated by the British government’s desire to win the support of pro-German Jewish- American bankers so that they would help push the USA into the war.

Elon argues that at the beginning of the war,  German- American Jewish financiers sided with the Germans and rejected possible alliances between the USA and England.  “Jacob H. Schiff, head of Kuhn, Loeb—at the time the largest private bank in the United States after J. P. Morgan—declared that he could no more disavow his loyalty to Germany than he could renounce his own parents. Schiff prayed for Germany’s victory. In a statement to the New York Times on November 22, 1914, he charged the British and the French with attempting to destroy Germany for reasons of trade.” (The Pity Of It All, pg. 455)

According to Elon, the Brits had encountered a Jewish problem with  American Jews. “The British government took these developments very seriously. In a fit of paranoia, the British ambassador in Washington even suspected the existence of a veritable German Jewish conspiracy in the United States directed at Britain.” (Ibid)

Thanks to the Balfour declaration German Jewish bankers in the US flipped sides. Seems that they betrayed their fatherland, no more were they German patriots. Elon’s conclusion is that: “The 1917 Balfour Declaration, calling for the establishment of a Jewish national home in Palestine, was at least partly motivated by the British government’s desire to win support among pro-German American Jews.” (ibid)

The take home message is rather devastating. For some time our universe has been dominated by tribal interests that are foreign to most of us. And for some reason we cannot really explore the conditions that shape our reality and dictate our doomed future.

This is, in fact, the precise meaning of Jewish power. Jewish power is the power that suppresses criticism of Jewish power. Some of the less sophisticated critics of Israel accuse Zionism and Israel of various conspiratorial doings. I, on the other hand, have said repeatedly that there are no Jewish conspiracies. All is done in the open. The Balfour ‘declaration’ that was written to a Jewish financier was quickly made public.  America was openly pushed into WWI for the sake of Zion.  The appointment of a Zionist Jew, Herbert Samuel, as the high commissioner of Palestine wasn’t a secret either. It was actually controversial at the time.

These events were as clear at the time as are contemporary Jewish lobby groups such as AIPAC, CRIF, CFI and LFI who push, in broad daylight, for Zio-driven immoral interventionist wars against Iraq, Syria, Iran and Libya. A century of constant abuse has  left us speechless. We do not know how to deal with this menace. And this is the core of our shame. This is what our history is there to conceal. This applies to you and me, but it also applies to Theresa May. To tell the truth about the Balfour Declaration is to publicly admit to 100 hundred years of Goyim solitude.

In the last few weeks, Palestinian solidarity enthusiasts have been creative in producing numerous proactive slogans. The one that grabbed my attention this week was “Balfour Declaration -100 years of ethnic cleansing.”  This week actually marks a century of Zionist domination of the Western civilisation.  But let me tell you, the real authentic Palestinians, those who live in Gaza and the West Bank may be slightly better off than the rest of us. While we are often overwhelmed by the sophistication of our masters in Tel Aviv, the Palestinians in the West Bank, Gaza and Lebanon know exactly who their enemies are; they meet them in roadblocks, they recognise the sounds of their drones.  Our enemy here, in the USA, in France and in Britain, is somehow elusive: is it Zionism, is it Israel, or maybe just the Lobby? Is it really  ‘the Jews,’ or even Judaism? Where exactly does Judaism end and Jewishness start? Let me try to open your eyes. It is none of the above, and yet it might as well be all of the above and beyond.  Zionism is a sophisticated matrix and it shifts rapidly.  Zionism like Jewish anti Zionism strives for your intellectual castration. It somehow defies your opposition even before you can utter it yourself. How is this done? It obliterates your ability to act ethically and rationally. It targets your survival skills. How? It eradicates your Athenian roots and replaces them with a rigid Jerusalemite regulatory system.

Zionism, my friends, can only operate within a Jerusalemite dominated universe. A world governed by a tyranny of correctness. Was it Herzl, Ben Gurion or Netanyahu who imposed such tyrannical conditions on us?  Not at all, this is the role of the New Left, the Identitarians, the cultural Marxists, the ‘progressives’ the people who adhere to ideological collectivism. The people who in the name of diversity silence the majority. Those who instead of uniting us around that which we all share, actually seek to divide us into infinitesimal particles of biological symptoms (skin colour, sex orientation, etc.).

In opposition to the Jerusalemites of the world who in the name of ‘correctness’ tell us what to say and what to think, Martin Heidegger, the Athenian, taught us that to educate is to teach others to think for themselves and how to refine the questions (as opposed to recycling answers).

Time is overdue for us to liberate ourselves from our shame. Time is ripe to call a spade a spade. Now is the time for Alethea ( truth – Ancient Greek) and Logos to prevail.  We must emancipate ourselves and find our true voice once again.  Emancipation is opposition to the Jerusalemite oppressive condition. It is the fight for the disclosure of human unity once again.

Being in Time – A Post Political Manifesto, Amazon.co.uk , Amazon.com and  here (gilad.co.uk).