[ Editor’s note: The Fusion GPS opposition story has gotten a lot of press lately. We know that the Washington Free Beacon was initially contracted to gather opposition research on Trump (NY Times story) through a funder who the Senate Judiciary hearing chose to hide from the public, but who we now know was Paul Simpson, the mega hedge fund principal and major GOP donor.

In what will be one of the strangest twists in political history, the Hillary Clinton campaign stepped in to take over, using discretionary funds inside the DNC. The attorney arranging this, Mr. Marc Elias, represented both Hillary and the DNC, your typical cozy DC relationship insider’s game.

Still missing in part of the puzzle was the roughly $1 million spent on Fusion’s research activities, but only $168,000 going to the now infamous Mr. Christopher Steele, who quickly produced the 35-page report where, to date, its claims have remained largely unverified. This keeps it in the crosshairs of having been a totally or partially fabricated report by Steele using Putin opponents inside Russia. Imagine an ex-Intelligence agent being involved in something like that.

But while this story got tons of media, the one that Gordon and VT are telling has not, because it involves a little country in the Mideast, who always gets handled with kid gloves, but not here at VT.

Trump’s heavy Jewish-Russian oligarch mafia ties have not been touched, nor his Jeffrey Epstein sordid connection, because it involves that special little country, so even the Dems won’t touch… Jim W. Dean ] 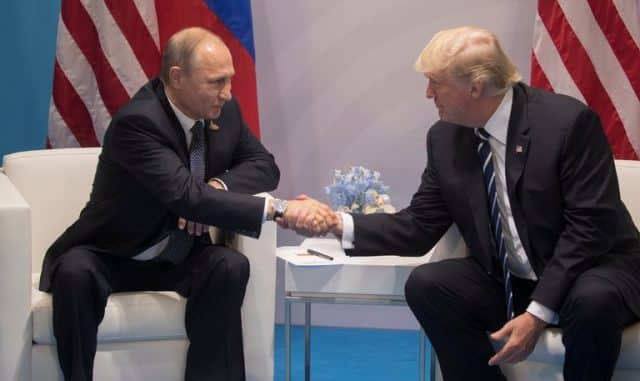 Is US President Donald Trump being blackmailed by Russia? This is the real question not just the American public is asking, with Trump’s approval rating hovering in the 30% range, but one being asked around the world. To answer this, we need to ask questions no one asks. Why is it the press never seems to ask the really hard questions?

Let’s go back and look at 9/11, just for an example. What if, let’s say, after the attack on Pearl Harbor back in December 1941, the US invaded Canada instead. After all, Canada is closer, has tons of oil, and not so many guns.

If the US did invade Canada and the men who survived Pearl Harbor came home, stories of Japanese planes instead of a mysterious Canadian submarine or such, would there have been an outrage? Would there have been an inquiry? What would have happened to the people who covered it all up and sent America’s military might the wrong way?

Well, this is exactly what happened after 9/ll. Israeli intelligence pumped phony Intel, through their neocon surrogates, into Washington and London, all of it made up, imaginary nuclear programs, imaginary al-Qaeda armies, imaginary training bases around Afghanistan that nobody ever found, and now millions are dead.

Those who told the lies are billionaires many times over with a fully complicit press never having noticed, never asking the question, never peeking behind the curtain.

Let’s go to 2016 and the dossier. Is Trump being blackmailed for being filmed while engaging in disgusting and filthy sex acts, and by filthy, we mean the hotel room would need to be burned out with a flame thrower. Our assessment is “probably” with a very strong leaning toward “absolutely yes.”

This is based on analysis of his behavior before, the real credibility of the dossier, which is high, and how his actual policies have and behavior after assuming the presidency indicate a leader that is being “leveraged” and is compromised.

Here is what we know:

Trump talked about Russia and Syria and how he was going to partner with Russia to fight ISIS. Trump talked about a lot of things, but it was empty talk. Trump’s real policies have been to betray Russia at every turn, as Russian President Vladimir Putin noted recently.

Trump has pushed for renewed sanctions on Russia but more than that, America’s would-be partnership with Russia against ISIS and its sister organizations began to fall apart even before it was implemented.

Russian military satellite imagery has proven that the US is working hand in hand with ISIS, while America’s Kurdish allies have advanced into Syria’s oil rich Deir Ezzor province with no casualties and while ISIS units move seamlessly through American/Kurdish lines to attack the Syrian Arab Army.

Then we have Trump’s missile attack on Syria in April 2017 in response to a claimed Sarin gas attack by the Damascus government. All reason would indicate no gas attack happened; film evidence proves that it was staged, and eyewitnesses tell of media teams from Reuters and al Jazeera arriving days in advance and staging the event.

What is forgotten, not just forgotten but actively covered up by the “fake news” Trump attacks daily, is this:

As early as 1994, Trump was owned by a foreign power. It wasn’t Russia. This is when Trump’s close friend, close but now forgotten, convicted sex criminal Jeffrey Epstein, according to court documents filed in New York on April 26, 2017, “fixed” Donald up with a girlfriend.

She was, according to court documents, 13 at the time and, according to her attorney, Thomas Francis Meagher, Trump repeatedly raped her and then threatened to have her entire family killed.

In fact, there are nearly as many complaints against Trump as Harvey Weinstein. Back in 1994, when Epstein and Trump were close friends, Epstein was being “handled” by a known intelligence operative of the State of Israel, daughter of Robert Maxwell, Ghislaine Maxwell.

Go back a couple of more years and Trump shows up surrounded by mobsters like Felix Sater and his Bayrock Group.

Truth be told, Trump hasn’t stood by Russia for a minute but has stood by Israel, including through his attempt to divide Syria and fight a land war there against Russia, the obvious culmination of any US military operation against Assad.

By 1991, a bankrupt Donald Trump was taking in and we mean “laundering” up to $300 million per year in Mafia cash. These were the “Russian investors” Donald Jr. talked about, almost all born in Russia and almost all spending at least part of the year in Israel.

This is why Trump backs ethnic cleansing of the West Bank, when no other president has done so. This is not a minor issue, as backing ethnic cleansing is directly in violation of the Geneva Convention, and Trump is doing exactly that. It is a war crime.

Other presidents either used common sense, perhaps even morality, or simply were afraid of committing “crimes against humanity.” Trump has shown none of these characteristics. What he has also not shown is that he has ever worked for Russia, not hardly.