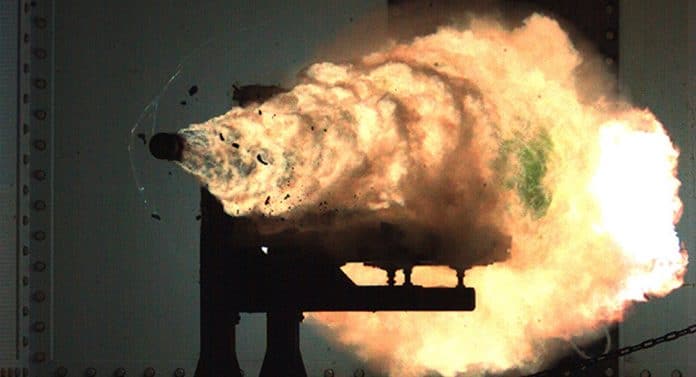 The Indian Defense Research organization hopes to soon complete trials of electromagnetic railguns that would give the country’s naval forces a superlative advantage and a capability to launch devastating attacks on both land and sea targets.

NEW DELHI (Sputnik) — Indian defense scientists have successfully developed electromagnetic railguns (EMRG) that can fire projectiles at Mach 6 (six times the speed of sound) or 4,600 miles per hour. Such railguns are touted as one of the future technologies of warfare, as they use kinetic and laser energy instead of controlled explosives for firing missiles.

According to the state-owned Defense Research and Development Organization (DRDO), a 12 mm square bore EMRG has been successfully tested and they are preparing for the 30 mm variety. The target is to accelerate a one kilogram projectile to a velocity of more than 2,000 m/s with a capacitor bank of 10 megajoules.

“A simple, single pulse driven railgun launcher was developed with a minimum of metal components in proximity to the bore to maximize the inductance of the launcher and to improve the launch efficiency. The launcher has a 12 mm square bore cross-section. The launcher was fabricated with lengths ranging from 1 to 2 meter,” a defense scientist involved with the project told Sputnik on condition of anonymity.

Experts are of the opinion that India is gaining expertise beyond the conventional fields for technology development.

“As handling will be very easy, the armed forces can deploy it at any location in an emergency situation. It will be a very tactical weapon for the naval forces, Rajiv Nayan, a missile technology expert at the Delhi-based Institute for Defense Studies and Analyses (IDSA), told Sputnik.

Another expert believes that such technological advancements will not only provide more teeth to the armed forces, but will also affect a change in the principles that guide the Indian military’s approach to warfare.

“These are the times of early stages of development and more such tests in the future would help India to operationalize this technology, which eventually could demand some changes into the military doctrines,” Ajey Lele, a security analyst at IDSA, told Sputnik.

India expects to equip its naval forces with EMRG as the system has the potential to provide responsive, long-range, accurate and high-volume naval surface fire support. Railguns will also eventually be able to engage surface targets in direct-fire mode. Overall, EMRG will offer numerous advantages over conventional naval gunfire systems, as they have extremely long range, speed and accuracy thus nullifying the escape factor of an enemy platform or approaching projectile.