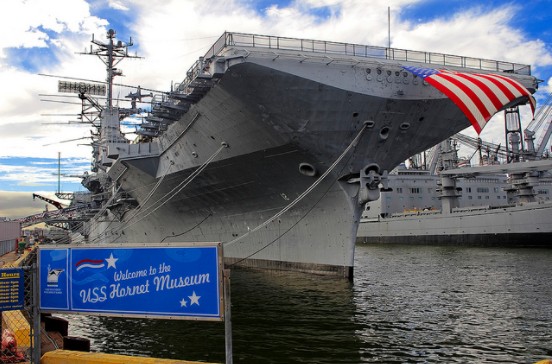 Alameda, CA – Aircraft carriers take a beating during times of war, but even in peacetime a ship’s physical appearance gets damaged due to the effects of weather and inactivity. At 74-years old, the USS Hornet is looking its age, but AkzoNobel, a paints, coatings and chemicals company, is working with the USS Hornet Sea, Air & Space Museum to make the ship look as good as it did when it was commissioned in 1943 by donating more than 1,600 gallons of military-grade International® Marine Coatings to repaint the entire 873-foot vessel.

Decommissioned in 1970, the USS Hornet was named a National Historic Landmark in 1991 and was converted into the USS Hornet Sea, Air & Space Museum in 1998 and is docked at Old Alameda Point.

“Our mission is to honor the legacy of the USS Hornet by connecting the greatest generation of Americans, who built and served aboard this ship, with future generations,” says Mike McCarron, Executive Director of the USS Hornet Sea, Air & Space Museum. “We host more than 80,000 visitors at the Museum each year. We are grateful to AkzoNobel for its donation because it helps us to bring our visitors back in time, by giving them the opportunity to see what the Hornet looked like in its prime.”

The USS Hornet has a long, storied history, aside from its active role in World War II and the Vietnam War.

In 1954, the ship helped in a search for survivors of a British Cathay Pacific DC-4 commercial airliner that was shot down off the Chinese island of Hainan by two Chinese fighter jets, with its crew locating several survivors in what became known as the “Hainan Incident.”

Later, in 1961, the crew of the Hornet helped fight the devastating Hollywood Hills fire and the ship’s generators were used to feed electricity into the Southern California power grid.

The ship also played a part in the space race in 1969. On July 24 of that year, President Richard Nixon was aboard the Hornet when the vessel recovered Apollo 11 astronauts Buzz Aldrin, Neil Armstrong and Mike Collins after the spaceship made the first successful moon landing.

“At AkzoNobel, we create products for the military, the marine, aerospace and aeronautics industries, and we are in electrical insulation and power generation as well. When reading through the history of the Hornet, I was impressed by how much our pasts are intertwined, and I am proud that we can help the Hornet share its story for years to come,” says John Mangano, North America Regional Marketing Manager for Marine Coatings at AkzoNobel.

In addition to donating the paint needed to coat the Museum, AkzoNobel will also provide its expertise, with Mangano serving as a technical advisor for the project. Painting is expected to conclude during the first half of 2018, and the USS Hornet Sea, Air & Space Museum will remain open to the public throughout the project.

AkzoNobel creates everyday essentials to make people’s lives more livable and inspiring. As a leading global paints and coatings company and a major producer of specialty chemicals, we supply essential ingredients, essential protection and essential color to industries and consumers worldwide. Backed by a pioneering heritage, our innovative products and sustainable technologies are designed to meet the growing demands of our fast-changing planet, while making life easier. Headquartered in Amsterdam, the Netherlands, we have approximately 46,000 people in around 80 countries, while our portfolio includes well-known brands such as Dulux, Sikkens, International, Interpon and Eka. Consistently ranked as a leader in sustainability, we are dedicated to energizing cities and communities while creating a protected, colorful world where life is improved by what we do.
ATTENTION READERS
Due to the nature of independent content, VT cannot guarantee content validity.
We ask you to Read Our Content Policy so a clear comprehension of VT's independent non-censored media is understood and given its proper place in the world of news, opinion and media.