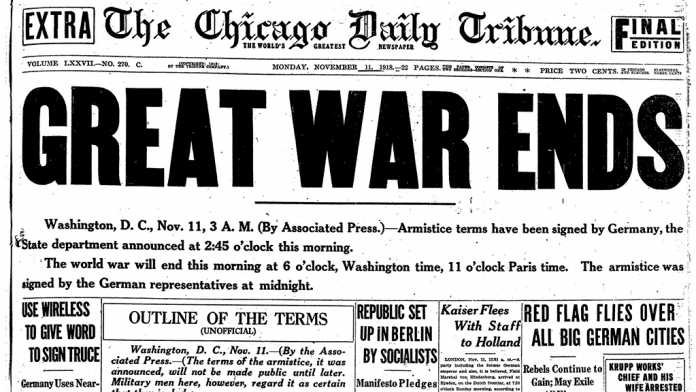 By the end of autumn 1918, the alliance of the Central Powers was unraveling in its war effort against the better supplied and coordinated Allied powers. Facing exhausted resources on the battlefield, turmoil on the home front and the surrender of its weaker allies, Austria-Hungary, Bulgaria and the Ottoman Empire, Germany was finally forced to seek an armistice with the Allies in the early days of November 1918.

On November 7, the German chancellor, Prince Max von Baden, sent delegates to Compiegne, France, to negotiate the agreement; it was signed at 5:10 a.m. on the morning of November 11.

Ferdinand Foch, commander in chief of all Allied forces on the Western Front, sent a message by telegraph to all his commanders: “Hostilities will cease on the entire front November 11 at 11 a.m. French time.” The commanders ordered the fighting to continue throughout the morning of November 11, prompting later accusations that some men died needlessly in the last few hours of the war.

As the historian John Buchan has written of that memorable morning: “Officers had their watches in their hands, and the troops waited with the same grave composure with which they had fought.” As watch hands reached 11, “there came a second of expectant silence, and then a curious rippling sound, which observers far behind the front likened to the noise of a light wind. It was the sound of men cheering from the Vosges [mountains] to the sea.”

The Great War took the life of some 9 million soldiers; 21 million more were wounded. Civilian casualties caused indirectly by the war numbered close to 10 million. The two nations most affected were Germany and France, each of which sent some 80 percent of their male populations between the ages of 15 and 49 into battle. At the peace conference in Paris in 1919, Allied leaders would state their desire to build a post-war world that would safeguard itself against future conflicts of such devastating scale.

The Versailles Treaty, signed on June 28, 1919, would not achieve this objective. Saddled with war guilt and heavy reparations and denied entrance into the League of Nations, Germany complained it had signed the armistice under false pretenses, having believed any peace would be a “peace without victory” as put forward by U.S. President Woodrow Wilson in his famous Fourteen Points speech of January 1918.

As the years passed, hatred of the treaty and its authors settled into a smoldering resentment in Germany that would, two decades later, be counted–to an arguable extent–among the causes of the Second World War.

But that would all come later. On November 11, 1918, the dominant emotion for many on and off the battlefield was relief at the coming of peace, mixed with somber mourning for the many lives lost. In a letter written to his parents in the days following the armistice, one soldier–26-year-old Lieutenant Lewis Plush of the American Expeditionary Force (AEF)–eloquently pondered the war’s lasting impact: “There was a war, a great war, and now it is over.

Men fought to kill, to maim, to destroy. Some return home, others remain behind forever on the fields of their greatest sacrifice. The rewards of the dead are the lasting honors of martyrs for humanity; the reward of the living is the peaceful conscience of one who plays the game of life and plays it square.”

Other important events on this day in history