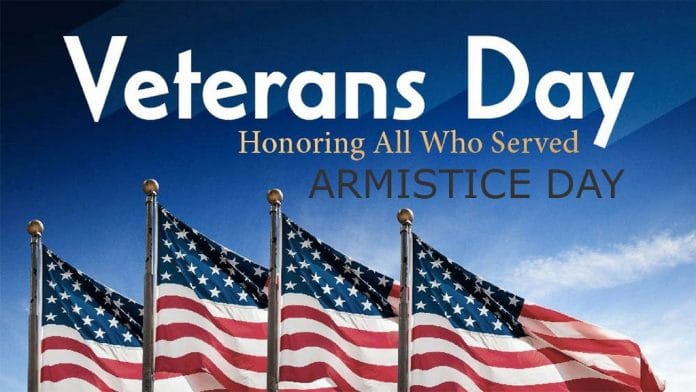 Veterans Day is a U.S. legal holiday dedicated to American veterans of all wars.

In 1918, on the 11th hour of the 11th day of the 11th month, an armistice, or temporary cessation of hostilities, was declared between the Allied nations and Germany in World War I, then known as “the Great War.”

Commemorated in many countries as Armistice Day the following year, November 11th became a federal holiday in the United States in 1938. In the aftermath of World War II and the Korean War, Armistice Day became legally known as Veterans Day.

The end of World War I creating Armistice Day had amazing consequences sowing the seeds for our current world that we still live in today.

Imagine a beaten young soldier named Adolf Hitler serving the Kaiser on the battle fields of France filled with anger and humiliation at the loss.  Imagine the further humiliation at the Treaty of Versailles where Germany was subjected into economic slavery…. Imagine the rise of the Nazi’s and the consequences that led to World War II

Or imagine the creation of the Modern Middle East that, since World War I, has been in absolute turm-OIL.  The World War I loss of the Ottoman Empire left a vacuum that created the Sykes-Picot secret deal which actually created the modern countries of the Middle East which continues to shape and define the mess it remains in today.

So yes, Armistice Day has changed the world forever and left us with serious consequences.  The good news is that we’ve turned it into a day to celebrate Veterans who served and that’s good.

But let’s also remember that war is hell and it’s not something we should go lightly into especially as we continue our march into our newly connected 21st century where wars can be avoided by building bridges!

So yeah, today celebrate and thank a Veteran and, in genuine gratitude, shake the hand of a current service person in our military letting them know how much we appreciate their commitment and work for our collective benefit.  It’s important.  And let’s build bridges like never before seen in history so we don’t have to celebrate another Armistice Day!