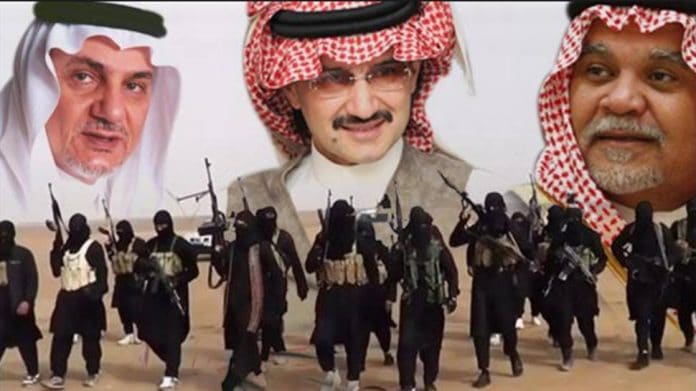 This is a story for our professional readers, those who know solid gold intel and the ‘great game.’  It will be a short but fun ride.

We will establish clear ties between generally recognized terror groups and news organizations.  This time, one of what we recognize as a “terrorist friendly” media outlet, Middle East Eye, has engaged in a bit of disinformation warfare and got themselves caught.

Middle East Eye has joined a rogues gallery of front groups used in supporting destabilization efforts against Syria and Iraq, including George Clooney’s “White Helmets,” the Syrian Observatory for Human Rights, and dozens of others.

In the process of tracking down that organization, we began stumbling over a network of interlocking groups, all of whom affiliate in some way with ISIS and the al Qaeda affiliates inside Syria.

The story, leaked to VT as a “Trojan horse,” stated that Prince Bandar of Saudi Arabia was arrested by his own government for organizing a program of supporting terrorist groups inside Syria.  It was inferred by these sources that the new Saudi regime, based on the belief that the current wave of arrests is part of a “pro-democracy coup,” is part of an effort to end years of alleged war crimes Bandar has supported, against both Syria and Iraq.

There is, however, no evidence that not only was Bandar personally responsible in any way, bit that any aspect of this story is true with some exceptions.

Yes, it is true that Saudi Arabia, aided by the Mossad, CIA and MI 6, founded al Qaeda and ISIS.  This was long proven through documents Syrian intelligence has held since 2015, proving that ISIS and al Qaeda were not only funded by Qatar, Saudi Arabia, Turkey and Israel, but openly armed by Britain and the US, and, wait for it, in some cases commanded by officers from those nations as well.

In an operation in May, 2015, three Turkish officers with chemical warfare background, were killed.  This happened in Raqaah, Syria in an underground facility under a soccer field.  The US had just staged a bombing attack on the area, which was then hit by Syria Special Forces in an accidental co-coinciding attack.

News reports by the Syrian Observatory for Human Rights, citing the air attack, stated that the US killed 52 Syrian civilians.  They failed, however, to carry the rest of the story including the Turkish Army officers killed and other important facts.

The names of the recovered dead Turkish officers are, according to Syria’s then Minister of Justice, in an exclusive interview with VT:

“Syrian forces on the ground quickly entered the complex after the US attack. The command center was located a local athletic field. In addition to the three Turkish officers Najim Al Dein Tourna, Jakri abdullah and Khoder Jaherzak specialist in IEDs and chemical weapons other top ISIS leaders died including Saudi, Somali and Iraqi.

A high ranking Turkish officer explained to interrogators that Turkey’s support of ISIS and their direct involvement in the use of chemical weapons is meant to give Turkey influence and leverage when Al Nusra and the Muslim Brotherhood enter Damascus. The officer indicated that sarin and now chlorine gas attacks are unleashed against Syrian civilians while, as clandestine media outlet for ISIS,  “Syrian Human Rights Watch” placed blame on the Damascus government.”

Terrorists, backed by Turkey and the Syrian Human Rights Observatory, aided by “White Helmets,” staged a similar attack on September 17, 2017.  US President Donald Trump at the behest of his tearful daughter, Ivanka, ordered a missile attack on Syria in retaliation.

A UN panel, acting on evidence supplied by Turkish intelligence and, quite frankly, al Qaeda, has found Syria responsible for the 2017 attack.  VT’s own investigation, including the exclusive interview of two eyewitnesses, was able to discern that gas canisters were brought into Khan Shaykhun on two Mitsubishi trucks, driven by Turkish drivers.  We continue:

Two days ago, a press story was leaked, a total hoax, that Saudi Prince Bandar, sometimes called “Bandar Bush,” was arrested.  The story was channeled into South Front and then to VT through Middle East Eye and Global Research, two news organizations VT has been watching for years.

Both are, according to our sources, collaboratively funded by British and Israeli intelligence as disinformation sites.  Both are highly professional and cover stories that attract a mix of “left  leaning” and alternative media audiences.

However, VT has sources next to Prince Bandar, as two of our board members are close personal friends of the prince.  The story was a “burn” for Southfront, or was intended to be, and for VT.  You see, a Bandar arrest is huge news.

This issue in itself is only a single minor component in the war on VT and Southfront by the cabal of intelligence agencies behind al Qaeda and ISIS.

Last month, Oxford University, or a minor front group, funded by VT “exposed” terror front Google Jigsaw, ran a hit piece on VT and South Front.  Both were accused of trying to undermine western civilization on behalf of Russian hordes.

VT had exposed Google Jigsaw for its role, under its previous incarnation, in smuggling chemical weapons into Syria through Turkey and their suspected role is the killing of journalist Serena Shimm.

“Jigsaw” is an online project of Israeli controlled tech companies, including Google and Facebook, to control internet searches and bring all bloggers and alternative media outlets under their umbrella.  Google wants, quite officially, to be able to censor at will any news or editorial content they believe, or that their masters in Israel and the other intelligence services of the US, UK, Turkey, Saudi Arabia, India and France, “unfavorable” or “fake.”

Jigsaw also offers services to dissidents around the world, aid in helping them organize regime change in governments that Google and their “handlers” believe are not the right kind of democracy.  Simple “google” them, go to their site, follow the links, you won’t believe how brazen they are about it.

The pattern has been consistent, that media personnel in the paid “fringe” media are invariably poorly laundered intelligence assets.  In each case, their platforms are pure “fake news” and always in support of Israeli policy.

An FBI source, to remain unnamed, when learning that VT didn’t receive millions in funding from someone, it was believed no organization of this size could run on less than $30 million a year, was totally volunteer, was astounded.

You see, their attempts to track down foreign influence in the alternative press, in every other instance, found millions in covert funding, every instance but VT.

Not only were bloggers being paid but activists as well.  It was assumed that money always came from Iran or Russia.  However, when doing more than scratch the surface, the “usual suspects” came to light.

As background, VT recently reviewed a 2010 investigation into connections between the Anti-Defamation League, the Southern Poverty Law Center and neo-Nazi publications like Storm Front.  We ran a test, set a trap and this is what we found.

Eight years ago, we published interviews with David Irving, the famous World War II historian who set about, after startling research, advocating reassessment of the holocaust, Hitler himself and, now wait for it, Churchill. Irving is an abrasive and arrogant but highly capable scholar, targeted for his efforts to destroy the popular narrative of World War II that he contends to this day is utterly false.

Within one hour of publishing our review of Irving on VT, the story was mirrored on the Nazi website called “Stormfront.”  Stormfront has long hated VT as a “Jewish” publication and has continually derided VT’s multi-culturism.

Then, within an hour, both the SPLC and ADL, ran smear pieces on VT and Irving, citing their affiliation with Stormfront.  All of this took two hours, meaning VT is continually monitored by Mossad front groups and that, now wait for it, they in actuality, are the neo-Nazi movement.

Since that time Israel and Saudi Arabia stand exposed as partners against Arab unity for 60 years, betraying the Palestinian people, coordinating terror attacks against the US and Western Europe as well.

Syria proved this.  Now for a new “David Irving” to rewrite the War on Terror and 9/11 based on these accepted truths that the fake media ignores.