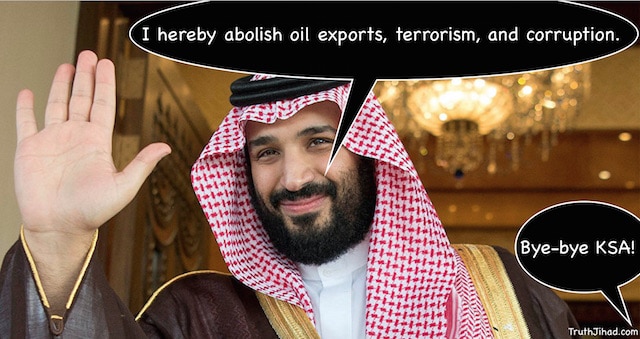 Clown Prince Mohammed Bin Salman has announced with great fanfare an ambitious new plan for the future of Saudi Arabia. He says his country (yes it is his country, he totally owns it now, having grabbed all the other family fortunes for himself) is going to:

*End its dependency on oil exports.

*Stop being the epicenter of Wahhabi extremism and terrorism, and become the avatar of “moderate Islam.”

Those are excellent ideas, Prince! But once you’ve eliminated oil, terrorism, and corruption, what will be left of so-called “Saudi” Arabia? I’ll tell you what: Zero, zip, zilch, nada…or as we say in Morocco, waloo.

Take away oil, terrorism, and corruption, and you’ve basically wiped “Saudi” Arabia right off the map. Which, come to think of it, might not be such a bad idea.

If Bin Salman’s real goal is to abolish his country as quickly as possible, he’s doing a pretty good job of it. First, he went along with the Rothschild-Fed “Plunge Protection Team” and pushed oil prices through the floor, in a doomed attempt to bankrupt Russia and Iran. In so doing, the Clown Prince shot himself in the foot.

“Saudi” Arabia is far more dependent on oil prices than Russia and Iran ever were. Those two countries actually have real economies. They have productive people adding value to things. And they have resources beyond oil. “Saudi” Arabia doesn’t. It’s just one big oil gusher, with terrorism and corruption as derivative sectors.

After bankrupting his country by obeying the Empire’s orders to collapse oil prices, Bin Salman threw away what was left of his money on doomed, idiotic, losing wars in Syria and Yemen. It’s no coincidence that almost on the very day that Saudi-backed ISIS was finally wiped out, Bin Salman orchestrated the “night of the long swords,” kidnapped and robbed his cousins, kidnapped the Lebanese Prime Minister, declared war on Lebanon and Iran, and uttered a three-digit-decibel whine about a likely false flag Houthi missile supposedly aimed at Riyadh.

But seriously folks, I think it is wonderful that Saudi Arabia is going to end oil, terrorism, and corruption, and go out and “get a real job.” In today’s increasingly interconnected world, there are many opportunities for decadent sybaritic ex-oil-sheikhs to make something of themselves.

For example, the Saudi royal family could start doing on-line order fulfillment for Amazon. Or they could re-invent themselves as a reality TV show. Bin Salman is such an obnoxious egomaniac he could easily take the reality TV world by storm and become the next Donald Trump.

Come to think of it, they’re already playing a sort of “desert kingdom survivor” game, with Bin Salman currently having the upper hand. (But who knows how it will end.)