[ Editor’s note:  The video above is BBC and proves beyond a doubt that the US helped found ISIS along with Israel and Saudi Arabia.  Turkey made billions trading with ISIS, channeling the wealth of industrialized Syria to factory owners and business partners who represent Erdogan’s inner circle.

First to leave Raqqa were the foreign commanders, regular military from Qatar, Saudi Arabia and Turkey including chemical weapons officers that ran the Raqqa based facility that the US is now hiding much like Germany was accused of doing with its gas chambers in the closing days of World War II.  America had to be first to Raqqa, it was from there that the US helped run the war… Gordon Duff ]

BBC News, London: Lorry driver Abu Fawzi thought it was going to be just another job.

He drives an 18-wheeler across some of the most dangerous territory in northern Syria. Bombed-out bridges, deep desert sand, even government forces and so-called Islamic State fighters don’t stand in the way of a delivery.

But this time, his load was to be human cargo. The Syrian Democratic Forces (SDF), an alliance of Kurdish and Arab fighters opposed to IS, wanted him to lead a convoy that would take hundreds of families displaced by fighting from the town of Tabqa on the Euphrates river to a camp further north.

The job would take six hours, maximum – or at least that’s what he was told. But when he and his fellow drivers assembled their convoy early on 12 October, they realised they had been lied to.

Instead, it would take three days of hard driving, carrying a deadly cargo – hundreds of IS fighters, their families and tonnes of weapons and ammunition. 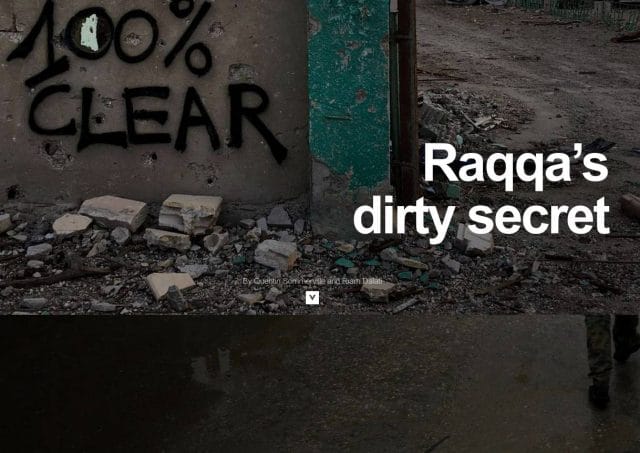 Abu Fawzi and dozens of other drivers were promised thousands of dollars for the task but it had to remain secret.

The deal to let IS fighters escape from Raqqa – de facto capital of their self-declared caliphate – had been arranged by local officials. It came after four months of fighting that left the city obliterated and almost devoid of people. It would spare lives and bring fighting to an end. The lives of the Arab, Kurdish and other fighters opposing IS would be spared. 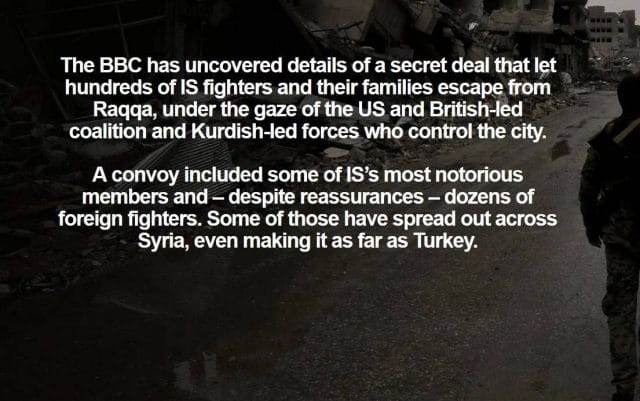 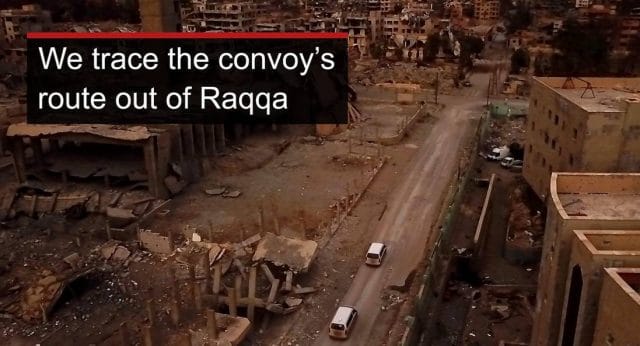