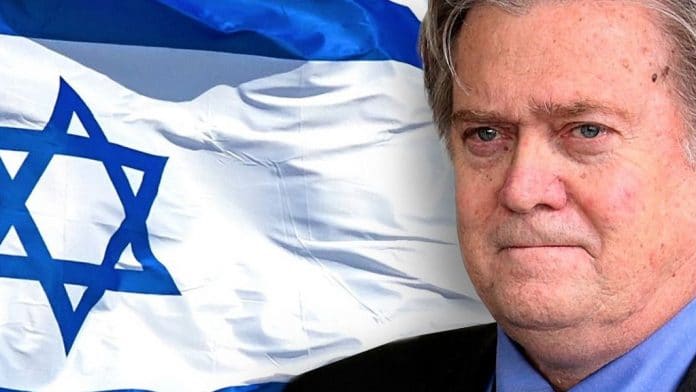 In his speech Bannon said:

Also in his speech, Bannon reminisced about Trump’s campaign coming under fire when the tape of Trump talking with Access Hollywood host Billy Bush was made public.

In the tape Trump brags about sexually assaulting women when he said:

Bannon said the one Trump supporter who got Trump and his campaign successfully through that situation and who made Trump’s election victory possible was billionaire Sheldon Adelson. Bannon said Trump’s win “would not have come without one other person besides Donald Trump — Sheldon Adelson.”

Speaking about the campaign crisis when the Access Hollywood scandal broke, Bannon said:

Bannnon’s statement that he is a “proud Christian Zionist” requires us to ask two fundamental and important questions: what is a Christian and what is a Zionist.

A Christian is defined as:

a person who follows or adheres to Christianity, an Abrahamic, monotheistic religion based on the life and teachings of Jesus Christ.

The American founder and Deist Thomas Paine pointed out an important reality regarding the meaning of Christianity and what being a Christian means in The Age of Reason, The Complete Edition when he wrote:

Something more therefore is necessary than mere cry and wholesale assertion, and that something is TRUTH; and as inquiry is the road to truth, he that is opposed to inquiry is not a friend to truth. “The God of truth is not the God of fable; when, therefore, any book is introduced into the world as the Word of God, and made a groundwork for religion, it ought to be scrutinized more than other books to see if it bear evidence of being what it is called.

Our reverence to God demands that we do this, lest we ascribe to God what is not His, and our duty to ourselves demands it lest we take fable for fact, and rest our hope of salvation on a false foundation.

It is not our calling a book holy that makes it so, any more than our calling a religion holy that entitles it to the name. Inquiry therefore is necessary in order to arrive at truth. But inquiry must have some principle to proceed on, some standard to judge by, superior to human authority.

Paine goes on to show what principles that are superior to human authority we can rely on. He wrote:

When we survey the works of creation, the revolutions of the planetary system, and the whole economy of what is called nature, which is no other than the laws the Creator has prescribed to matter, we see unerring order and universal harmony reigning throughout the whole. No one part contradicts another. …

This harmony in the works of God is so obvious, that the farmer of the field, though he cannot calculate eclipses, is as sensible of it as the philosophical astronomer. He sees the God of order in every part of the visible universe.

Here, then, is the standard to which everything must be brought that pretends to be the work or Word of God, and by this standard it must be judged, independently of anything and everything that man can say or do. His opinion is like a feather in the scale compared with the standard that God Himself has set up.

Regardless of which sect of Christianity is investigated, they all fall short of aligning with our gift from God of innate reason. This is why there are literally thousands of different Christian sects.

Looking at the definition of Zionist we see that a Zionist is someone who supports Zionism. And Zionism is the belief that the Jews should have a national Jewish state in Palestine.

Since being a Christian is ambiguous at best, and since being a Zionist is clearly believing in the promotion of the Jewish state of Israel, Bannon, and all Christian Zionists, are, in the final analysis, vaguely working for some type of interpretation of what is believed to be the teachings of Jesus, and clearly working for the promotion of Israel.