On this 16th day in November 1945, in a move that stirs up some controversy, the United States ships 88 German scientists to America to assist the nation in its production of rocket technology.

Most of these men had served under the Nazi regime and critics in the United States questioned the morality of placing them in the service of America.

Nevertheless, the U.S. government, desperate to acquire the scientific know-how that had produced the terrifying and destructive V-1 and V-2 rockets for Germany during WWII, and fearful that the Russians were also utilizing captured German scientists for the same end, welcomed the men with open arms.

Realizing that the importation of scientists who had so recently worked for the Nazi regime so hated by Americans was a delicate public relations situation, the U.S. military cloaked the operation in secrecy.

In announcing the plan, a military spokesman merely indicated that some German scientists who had worked on rocket development had “volunteered” to come to the United States and work for a “very moderate salary.”

The voluntary nature of the scheme was somewhat undercut by the admission that the scientists were in “protective custody.” 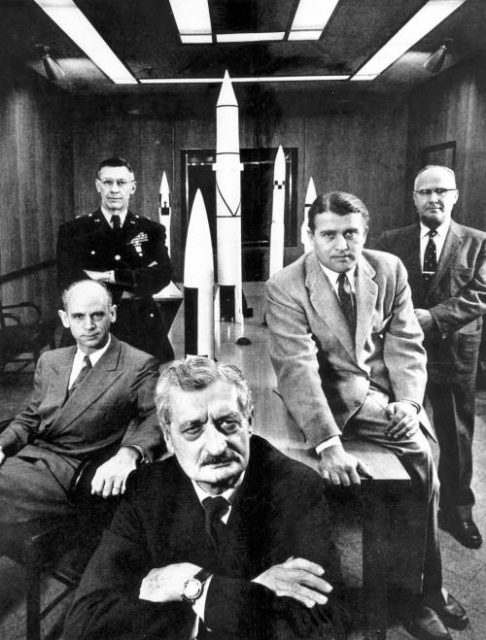 Upon their arrival in the United States on November 16, newsmen and photographers were not allowed to interview or photograph the newcomers. A few days later, a source in Sweden claimed that the scientists were members of the Nazi team at Peenemeunde where the V-weapons had been produced.

The U.S. government continued to remain somewhat vague about the situation, stating only that “certain outstanding German scientists and technicians” were being imported in order to “take full advantage of these significant developments, which are deemed vital to our national security.”

The situation pointed out one of the many ironies connected with the Cold War. The United States and the Soviet Union, once allies against Germany and the Nazi regime during World War II, were now in a fierce contest to acquire the best and brightest scientists who had helped arm the German forces in order to construct weapons systems to threaten each other.