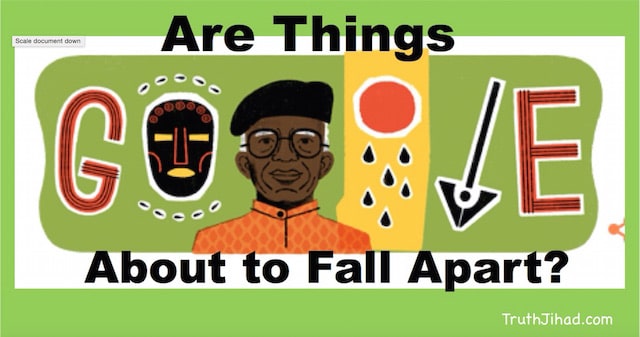 Today hundreds of millions of people will run a grand total of 3.5 billion Google searches. Every single search will bring up an image of Nigerian author Chinua Achebe, who, if he were alive, would be celebrating his 87th birthday.

Though my doctorate in African Languages and Literature focused on Arabic and North Africa, I had to read all the “African Lit” classics. And the most canonical classic, of course, is Things Fall Apart. Achebe’s masterpiece chronicles the collapse of a traditional African culture facing the guns and missionaries of the colonizing West. This “falling apart” is seen through the eyes of a tragic hero, Okonkwo, whose great failing is to succumb to his culture’s religious tradition of human sacrifice. (On the ubiquity of human sacrifice in human society and religion, see René Girard.) By sacrificing his adopted son, Okonkwo kills his own soul, leaving him easy prey for the invading missionaries of the Jesus sacrifice cult.

I recently read a more recent Nigerian novel, Purple Hibiscus by Chimamanda Ngozi Adichie. Like Things Fall Apart, Purple Hibiscus explores the way religion can lead people to sacrifice their own children. It portrays a fanatical Nigerian Catholic newspaper publisher and human rights icon, Eugene Achike, as seen through the eyes of his daughter Kambili. Eugene may be the toast of Amnesty International, but his fanaticism makes him a terrible, abusive father.

Whereas Things Fall Apart critiques both indigenous African paganism and colonialist Christianity, without offering any preferable alternative, Purple Hibiscus is an anti-Christian, pro-secular-humanist broadside (as well as a very good novel). In its world, religious rigor is necessarily inhuman and abusive; whereas the secular gospel of feminism, human rights, tolerance, diversity, individual self-fulfilment, and so on appears highly desirable. Such an African novel offers facile appeal to Western publishers and readers, since it flatters their belief systems rather than challenging them.

But one lesson taught by Things Fall Apart and Purple Hibiscus is surely valid: fathers’ rigid, outdated belief systems can lead them to sacrifice their children. We see many examples around us:

*The United States of America (or at least its leadership class) is permeated with a belief in American exceptionalism, according to which it is the USA’s destiny to dominate the world and impose its own culture on others. This belief, which is far more irrational and destructive than either paganism or Christianity, has led American leaders to sacrifice thousands of their sons and daughters in futile Mideast wars, and to pawn their children’s future to the international banksters who have profited to the tune of 8 trillion dollars in interest on those wars.

*Israel’s leaders believe the world is congenitally “anti-Semitic,” always ready to mass-murder Jews. Therefore, they believe, Israel always has to strike first, always has to be willing to employ the nastiest, most Machievellian tactics, always has to be on a war footing and deal out harsh blows to its perceived enemies. By behaving this way, the Israelis are digging their own grave, and the premature graves of their children—as may become all-too-apparent if the current rush to war is not halted.

*The Ibn Saud regime has long believed that in order to survive, it must collude with the imperial and colonial forces that ravage the Middle East. It is now about to embark on the ultimate act of collusion – a war on Iran, Lebanon, Turkey, and Russia on behalf of Israel. The likely result will be the decimation of the Arabian peninsula, the breakup of the Kingdom into several pieces, and piles of young corpses.

Things are falling apart today, right here and now, in the belly of the Western beast, the real “heart of darkness.” The horrors that befell Chinua Achebe’s hero Okonkwo are as nothing compared to what citizens of the decadent secular humanist dispensation are likely to experience when their world, too, finally crumbles.