The Russian Justice Ministry has sent letters to nine media outlets on their possible registration as foreign agents. Voice of America and Radio Free Europe / Radio Liberty are among those that could be recognized as foreign agents, the ministry said.

The ministry also sent letters to the administration of the Kavkaz.Realii, Krym Realii and Sibir Realii websites, as well as Radio Azatliq – all of which are Radio Liberty branches based in Russia. The Current Time TV channel, a joint project of Voice of America and Radio Free Europe / Radio Liberty, as well as the Radio Liberty-owned factograph.info website and IdelRealii project also received letters. 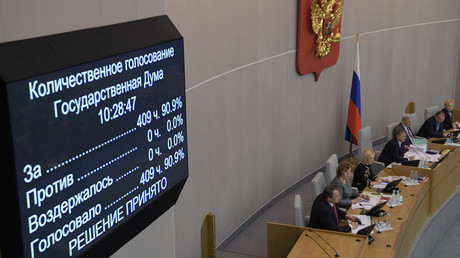 On Wednesday, the Russian State Duma passed the third and final reading of the bill, which requires mass-media outlets operating in the country but funded from abroad to register as foreign agents. The bill is a mirror response to Washington’s demand for RT to register as a foreign agent.

Media outlets that refuse to register as foreign agents may face sanctions similar to those applied in the case of NGOs and other groups which are currently regulated by the original foreign-agents law.

“Any attempts to attack the freedom of Russian mass media abroad are not and will not be left without resolute denunciation and a mirror reaction from Moscow. The approved bill will make it possible to express our reaction in due time,” Vladimir Putin’s Press Secretary Dmitry Peskov said after the bill was passed.

In September, the US Department of Justice (DOJ) demanded that the company supplying services to RT America in the US should register under the Foreign Agents Registration Act (FARA) before November 13. The US administration threatened to freeze the company’s assets if it failed to comply.

Commenting on the bill, RT’s editor-in-chief offered her condolences on Wednesday to all journalists “at all media organizations – Russian and foreign alike – who have been caught up in Washington’s political games.”