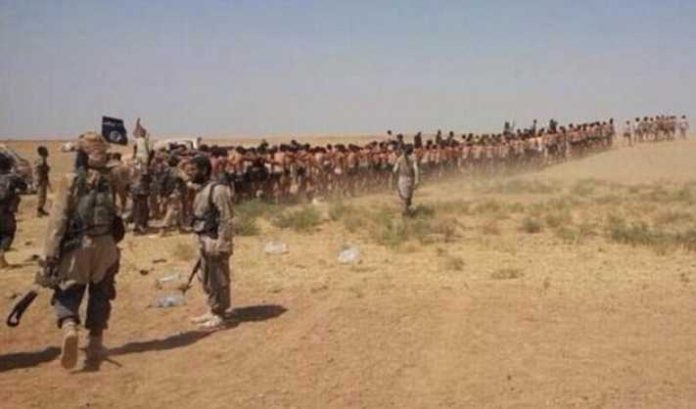 David Kilcullen-Former chief strategy in the office of the Coordinator of Counter-Terrorism. ISIS just like the “Mujahideen” is a creation of the West in partnership with Arab countries.

If you are like me then you must be confused about all news, documentaries, and statements made about ISIS- or DAESH or better yet” The Islamic State”.

One thing for sure, ISIS and its fighting members did not come from Mars. Mostly are mercenaries with substantial numbers coming from Saudi Arabia, Tunisia, and Morocco with at least 7,000 from Western Europe mainly from among immigrants from North Africa. A product of the Salafi Jihadist ideology that took hold in Europe over the last 40 years.

Now it seems that the war on ISIS in Syria and Iraq may be coming to an end. With the US, Russia doing most of the fighting from the air, while the Iraqi army is fighting remnants of ISIS on the ground. Arab allies who initially supported ISIS later on turned against them abandoned the fight sometimes ago, withdrawing their fighter jets from the battlefield and shifting the efforts to Yemen.

There have been many documentaries on the origin of ISIS to include among others PBS Frontline, National Geographic, BBC, CNN and Aljazeera among others. All agree that ISIS has its origin in Iraq made up of remnants of Saddam Hussein army and no thanks to the stupid, reckless and criminal decisions by Ambassador Paul Bremer as the governor of “Occupied Iraq” who decided on the “De-Ba’athification” of Iraq starting with the disbanding of the Iraqi Army that overnight put 400,000 well trained and loyal Iraqis on the streets, thus unleashing the worst wave of anti-American Occupation  resistance seen in modern times, forcing the American invasion forces to withdraw.

Ambassador Paul Bremer and his bosses in the White House should take full responsibility for the death of thousands of American soldiers, tens of thousand soldiers injured and the millions of Iraqis killed and take the legal responsibility the destruction of Iraq and the consequence the American invasion has on the entire region including the rise of ISIS.

No one in Washington, or London or in the Gulf gave much thought to the consequences of invading Iraq and toppling Saddam who and for a long time was one of the CIA loyal subject in the region.

One would think after all the disastrous wars we were in, decision makes will think of the consequences of starting new wars. As we have seen in Vietnam, in Iraq, in Libya, in Yemen and Syria it is so easy to start a war, but even the best generals could never predict the consequences or guarantee a win.

It is known fact that the brain behind ISIS in Iraq is Samir Abd Muhammad al Khilfwai, a former intelligence officer in Saddam Hussein’s air force that helped organize this “insurrection” turning it into “sectarian” war against the Shiite when Iran began to play a major role in Iraq post the American Occupation.

Giving the cause a “sectarian flavor” helped unite the Sunni countries mainly the Arab Gulf to support the insurgency, not against the American forces but against the new Iraqi state and army.

We must not forget the role of Abu-Musab Al-Zarqawi who with his Sunni terrorists waged relentless war against the American Occupation forces in Iraq but also against the Shiite dominated government. Turning Iraq into another “Killing Fields”.

One must wonder how with so many intelligence agencies, so many bright and not so bright military and civilian “terrorists” expert do someone like Abu-Bakr al-Baghdadi rise to the scene and almost overnight occupy a third an of Iraq and declare his Islamic Caliphate State?

We also must wonder about the competency of the “intelligence community” that failed to see this coming and failed to prevent al-Baghdadi fighters from routing several divisions of the American trained Iraqi army stripping the Iraqi army of brand new tanks, Humvees, anti-tank and anti-aircraft missiles worth one billion and looting $500 million sitting in the central bank of Mosul, not to mention the hundreds of brand new Land Cruisers.

In early 2000 “Sunni Arabs” began to talk about the “Shiite Crescent” extending from Iran to Iraq to Syria and Lebanon and the need to do something about. Well, ISIS was the answer.

The opportunity came when in March 2011, Bashar Al-Assad security forces detained, tortured 15 young boys who wrote graffiti in support of the Arab Spring. One of the boys Hamza Al-Khateeb was murdered as a result of torture.

Soon after, hundreds of protestors were killed and murdered by Bashar’s security forces, causing a number of Syrian officers and enlisted men to defect and form the Free Syrian Army.

While key Arab countries did their best to snuff out the Arab Spring mainly in Egypt and Yemen, they were very happy to jump in and throw their political financial and military weight on the side of the “rebels” choosing the most extreme of “Islamic” militias to support Jabhat Al-Nusra which received hundreds of millions in American and Gulf weapons to fight Bashar and the “Shiite Crescent”.

Now we have to ask, how in the hell can over 30,000 foreign fighters from Saudi Arabia, from Morocco and Tunisia from Chechnya and far away as Central Asia or Pakistan make their way all the way to Syria’s heartland joining al-Baghdadi forces from Iraq?

Bashar’s priority was not these invaders, who were on a religious mission to defeat the “Shiites” but his priority was to defeat the legitimate uprising of millions all over Syria. Using barrel bombs and chemical weapons Bashar succeeded in killing over 500,000 and forcing 12 million to take refuge outside the country and within the country, causing massive dislocation of the population in modern times.

Unable to defeat these invaders and the local uprising, Basher turned to his longtime allies Iran to provide leadership and strategy, turn to Hezbollah to provide fighter to augment his failing Syrian Army and also calling on the Russia that was more than willing to come to his aid, establishing air and sea basis in Syria not only to secure the regime but to act as guardians on the ground for Israeli interests. ( Russia was and is a strong ally of Israel).

Now 7 years of civil wars and invading armies, the Syrian Arab Spring is coming to an end, snuffed by an unholy alliance of Arabs, Iranians, Americans, Russians, French and British. The Americans, the Russians and their Arab and Israeli allies in the region all are in agreement ( now) that Assad for the moment was going nowhere. The Syrian Opposition turns out to be a shameless sham, serving different masters but not the Syrian people whom they claim to represent.

Tens of billions wasted on the destruction of Syria and Bashar sad to say, stuck to his guns and his security forces and was unable to address what began as a modest demand, end of the role of both the Ba’athist Party and the intelligence services in the daily lives of people.

As the war comes to an end. BBC reports that thousands of ISIS fighters and their families are under protection by US forces are finding their way from Riqqa to another country, perhaps to another mission somewhere, perhaps the Sahel, Libya to North Africa, even to Lebanon.

The question on the minds of many Arabs when will these wars incited by geopolitical competition and promoted as “sectarian” wars coming to an end? Will Lebanon be the next stop? let us hope not! Enough wars for a while. The people of the region need a break. It has been no stop wars since Saddam decided to invade Iran.

I always have to wonder, Arab armies with hundreds of billions worth of weapons have been defeated over and over, in days if not weeks, yet, the might of the US, Russia, and Iran are having tough times defeating the 30,000 Salafi-Jihadists mercenaries.

The costs of America’s wars in the Middle East and Afghanistan reached $ 5.6 trillion, while the costs of fighting ISIS for Iraq alone is close to $100 billion. Imagine; just imagine if these funds were invested in education, health, housing and infrastructure. We will not have ISIS.