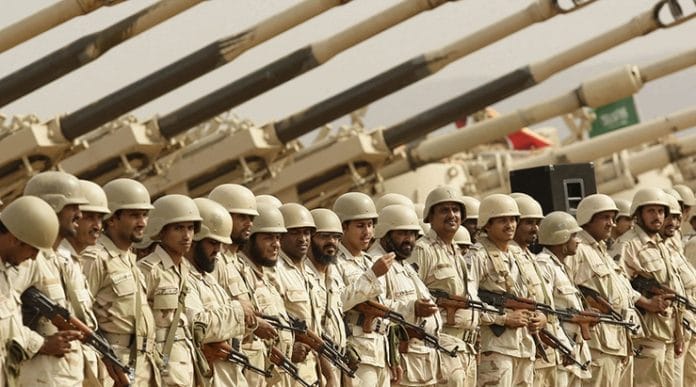 [ Editor’s Note: This story is moving fast. The Saudis called for an emergency meeting of the Arab League who then notified the UNSC that it wanted to “brief” them on Iran’s alleged destabilization efforts in the Mideast.

The biggest Arab and Muslim hater of all time, Avigdor Lieberman, and Israeli’s military affairs minister, want to form an anti-Iran coalition with Arab-Muslim countries despite some of these Arab countries have contributed largely to the ISIS terrorists fighting in both Syria and Iraq.

So it seems that Israel does not think we poor goyim can remember that one of the foundations of its foreign policy is creating endless conflicts among its Muslim neighbors over any and all issues.

This three ring circus will continue when a completely discredited Prime Minister Saad Hariri returns to Lebanon to raise his political status from the grave on being the most open puppet of another country in modern history. His children will remain behind in Saudi Arabia as hostages, a old tradition it seems that lives on…JD ]

Just when you think nothing in Saudi Arabia could get more bizarre, we got the story of Riyadh claiming Hezbollah of declaring war against Saudi Arabia. You just can’t make this stuff up. I had to check to make sure the article was not a spoof piece.

This crazy charge against Hezbollah was timed to dovetail with another bizarre event. Lebanon Prime Minister Hariri read his resignation letter in Saudi Arabia like he was some kind of a Manchurian candidate sleeper agent for the Saudis, which it turns out that he was, or their billionaire sock puppet, which is even worse.

As I write, Hariri will soon be a “guest” of the Saudis for almost two weeks, where is he claiming to return in a few days and might even revoke his resignation. He cited some condition that Hezbollah has to break off all ties with Iran, when without those military support ties, Israel would take South Lebanon whenever it wants. Hariri may become the most debased Prime Minister in modern times.

Sure, the Saudis have poured a lot of money into Lebanon, which sorely needs it, not only for its long time burden with the Palestinian refugees from Israel, but also the new ones from the Syrian war. Infrastructure in Lebanon has been stretched to the max in a country where the poor don’t pay taxes and neither do the rich.

I smell the hand of Israel working behind the scenes as usual on this latest threat caper. As the Syrian-ISIS war is winding down, we had expected the Coalition of Warmongers to have a new replacement conflict ready to go.

I mention Israel because it is seething, quietly, at its own stupidity in thinking that by helping to Balkanize Syria, the new puppet government in Damascus would concede Israel’s domination over the Golan Heights officially.

Israeli politicians wanting a piece of the oil and gas drilling there are held up with Israel not having the legal right to do so, which complicates selling the product internationally due to endless litigation by Syria.

There was not a problem in stealing Syria’s oil, where the Erdogan government had a field day buying it all through Turkish dealers after it had been trucked right through Iraqi Kurdish territory where Barzani got his cut in the rape of Syria. Erdogan seems to be “adjusting” whose side he is really on about twice a year now.

The 12,000 trucks involved in this ruthless aiding and abetting of terrorism trade could be seen from the moon with a regular household telescope. But for the US pilots flying over Northern Iraq, no telescope was needed. That’s how VT first learned about it. The pilots were not allowed to bomb these columns, despite knowing they were funding ISIS. The US Coalition is covered in shame for this.

Hezbollah stronger than ever due to Israeli mistakes

Israel now finds itself looking at a Hezbollah in Syria that is ten times more capable of defending itself from attack due to its vast experience gained in the Syrian war with conventional military tactics fighting ISIS and all the other US coalition proxy terrorists.

Combined with a sulking Saudi leadership that is not only disappointed in the failure to get its oil pipeline route to Europe through northern Syria, but also cannot win its war against Yemen, the poorest Arab country in the region, despite all of the best weaponry that the US, Britain, France and Germany could sell it.

One of the historical traits of despots is they always find someone else to blame for their own failures. We see that trait raising its head in the political purge taking place in Saudi Arabia.

In what was obviously a well-planned event, ministers and princes have been arrested in a corruption jihad in a country where corruption is in their DNA and all real work is shunned as something suitable only for slaves.

I must admit I was shocked to find Saudi Arabia’s most famous and well-known businessmen among them, such as Prince Alwaleed Bin Talal, one of the world’s richest men, and who had backed Crown Prince Salman’s economic reforms this Spring.

Former US Ambassador to Saudi Arabia, Robert W. Jordan, had the best one-line quote of the event from his Time Magazine interview, “It’s the equivalent of having Bill Gates, Warren Buffet, and Colin Powell arrested. It is a shocking display of power.”

No one else has said this yet, so I will. The young Crown Prince is instituting a reverse coup upon his own country by eliminating and looting all of his potential Royal opposition. Only time will tell if it was a wise one, but he may have already doomed Saudi Arabia’s long term prospects with this rash act on top of so many others SA has done that NEO readers are well aware of.

President Trump, not one to miss getting a headline, quickly jumped in to support the young Crown Prince’s actions, with the irony that Trump was interfering in a Saudi political dispute when he is already in a major controversy about his own ascent to high office. But president Trump is nothing if not a man of flexible positions.

Iran was dragged out with Hezbollah to be flayed in public in Saad Hariri’s pitiful tirade, reading his Saudi-prepared script claiming Iran once again to be the bogeyman of the Mideast, when we all know the extent Saudi Arabia has used proxy terrorists in the region.

The Saudis who tend to live in their own dream world seem oblivious to how silly this scandal makes them look, and even more so after the Wikileaks revelation that they have been working quietly with the Israelis for many decades. This was well known in all Intelligence circles, but dodged by mainstream press which has historically dealt with Israel with light gloves.

Could the Saudi obsession with Iran destroy the Royal Family?

Europe is standing solid on its support for the JCPOA, and we hear no denouncing of the agreement since the ball has been passed by Trump to a Congress that has its hands full with many problems, including criminal investigations swirling around the Republican White House and calls for impeachment.

So we have to ask ourselves is the US Coalition crazy enough, after the Syrian debacle and its exposure for using proxy terrorism, to get involved with the Saudis and Israel in another regime overthrow in poor Lebanon, who has already paid for its recent period of peace with blood and destruction?

Gordon Duff has reported that the US has been rescuing ISIS and other terrorists during the current Syrian offensive and has an angry army of about 20,000 of them in Jordan, resting up and waiting for new orders. What new crimes against humanity are being planned for them to participate in, in Lebanon maybe?

The Saudis are again blaming Iran for supporting Yemen when it endures a land, air and sea blockade enforced by the Royals and their Western arms dealers. Maybe Iran has a secret stealth fleet of cargo planes flying in old Russia Scud missiles. Meanwhile Trump sells the Saudis $50 billion more in weapons that it can neither afford nor knows how to operate, being dependent on outside contractors to keep the country running.

A more logical appraisal would indicate that Iran is supporting the Yemeni people politically. But the Saudis are now attempting to frame this political support as an act of war against Saudi Arabia.

I fear for the future because warmongers hate a vacuum, fearing that peace might rush in, and there is nothing they hate more than that, as they cannot play all their dastardly manipulation and pillaging games among the chaos and fog of war.

Everyone has the right of self defense

Syria, Iran and Iraq are going to be creating their own mini version of NATO for their unified defense. Lebanon is in a tough spot being next door to Israel and Jordan, who have shown they will support terror proxies either independently or as part of Team USA.

Lebanon could be the ground zero for a new proxy war against Iran and Hezbollah and an excuse for the Israelis to keep bombing Syria. The Russian position seems to be that they will do nothing to oppose those attacks as long as Russian facilities are left alone.

Iran ran a more honest and successful anti-terrorism campaign in Syria with its partners than the US coalition did, which is why it continues to be smeared with the ridiculous charge of sponsoring regional terrorism.

That cheap line is going to wear thin with Western publics at some point, and we might finally see the political revolt against “fake wars” that is long overdue. But I am not sure Lebanon will be around to enjoy it because, having already been pre-Balkanized, it just needs a slight shove to push it over the cliff.

Long suffering Lebanon does not deserve that, while Saudi Arabia actually does. So we will pray that God intercedes to do justice and deliver to the guilty what they have rightfully earned. Amen.

Note: The best article I have seen on the details of the Royal Families Byzantine internal politics during the current upheavel was done by Petr Lvov here at NEO with his Saudi Arabia Begins System Reform on November 13.