The vast majority of Koreans never wanted a powerful military force, largely because they know that such a military project would tax their pockets. Even President Moon Jae-in was unwilling to establish nuclear defense systems such as THADD in the country.

But since Trump has ascended to the Zionist throne, he has essentially made things very easy for foreign potentates like Benjamin Netanyahu. Trump has convinced Moon Jae-in that a missile defense system is actually going to help deter Kim Jung-un, as if North Korea is actually serious about invading another country. Moon Jae-in has now declared:

“The heads of South Korea and the United States reached a final agreement on removing the limit on missile payloads. We agreed to immediately begin negotiations on South Korea’s development and acquisition of the most advanced military surveillance assets.

“There must never be another war on the Korean Peninsula. In that sense, the United States is being a great help to us. Our overwhelming superiority of power based on the Korea-US alliance will eventually make North Korea stop its reckless provocations and come to the path of denuclearization.”

This is not how one can stop North Korea’s “reckless provocations.” The United States and countries in the West must stop living in a dream world. The US in particular thinks it can dictate what other countries must do, and yet the same United States is not willing to go by the same principles.

Now, let us suppose that there is no war with North Korea. Let us continue to assume that there won’t any war in the next ten years or so. What will happen to defense systems like THAAD? What if South Korea has to pay billions of dollars every year for that thing? Who will pay the bills? Moon Jae-in, the United States, the average Koreans?

You see, no one has been able to flesh out the answers to those questions in the media because the answers themselves would ruin much of the Zionist project. The average Korean or American has never been benefitting from those defense systems. The military industrial complex people are the ones who are actually laughing all the way to the bank. In an article entitled, “10 companies profiting the most from war,” USA Today itself reported in 2013:

“The business of war is profitable. In 2011, the 100 largest contractors sold $410 billion in arms and military services. Just 10 of those companies sold over $208 billion…These companies have benefited tremendously from the growth in military spending in the U.S., which by far has the largest military budget in the world.

If there is no war, or if the United States or any other countries aren’t using the products of those companies, then people are going to have to find a decent job, perhaps changing tires. It was even reported that there were at least 25 companies that benefitted from the Iraq war. 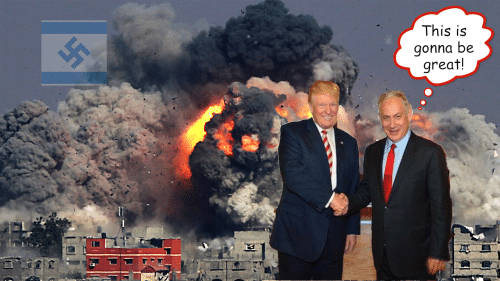 In 2013, the Financial Times itself revealed:

“An analysis by the Financial Times reveals the extent to which both American and foreign companies have profited from the conflict – with the top 10 contractors securing business worth at least $72bn between them.

“None has benefited more than KBR, once known as Kellogg Brown and Root. The controversial former subsidiary of Halliburton, which was once run by Dick Cheney, vice-president to George W. Bush, was awarded at least $39.5bn in federal contracts related to the Iraq war over the past decade.

“The US hired more private companies in Iraq than in any previous war, and at times there were more contractors than military personnel on the ground.”[3]

So, when Trump starts beating the war drum, he is essentially supporting the companies that are actually profiting from the deaths of civilians and other precious lives.[4] Jonathan Turley of George Washington University has shown that Einsenhower himself warned Americans about this military industrial complex. Turley wrote in 2014:

“In January 1961, US President Dwight D Eisenhower used his farewell address to warn the nation of what he viewed as one of its greatest threats: the military-industrial complex composed of military contractors and lobbyists perpetuating war.

“Eisenhower warned that ‘an immense military establishment and a large arms industry’ had emerged as a hidden force in US politics and that Americans ‘must not fail to comprehend its grave implications.’”

“The speech may have been Eisenhower’s most courageous and prophetic moment. Fifty years and some later, Americans find themselves in what seems like perpetual war. No sooner do we draw down on operations in Iraq than leaders demand an intervention in Libya or Syria or Iran.

“While perpetual war constitutes perpetual losses for families, and ever expanding budgets, it also represents perpetual profits for a new and larger complex of business and government interests. The new military-industrial complex is fueled by a conveniently ambiguous and unseen enemy: the terrorist.

“Former President George W Bush and his aides insisted on calling counter-terrorism efforts a ‘war’. This concerted effort by leaders like former Vice President Dick Cheney (himself the former CEO of defence-contractor Halliburton) was not some empty rhetorical exercise. Not only would a war maximise the inherent powers of the president, but it would maximise the budgets for military and homeland agencies.”

To put it mildly, Trump is effectively reasserting his position as a Zionist pawn whenever he starts talking about wars and rumors of war.