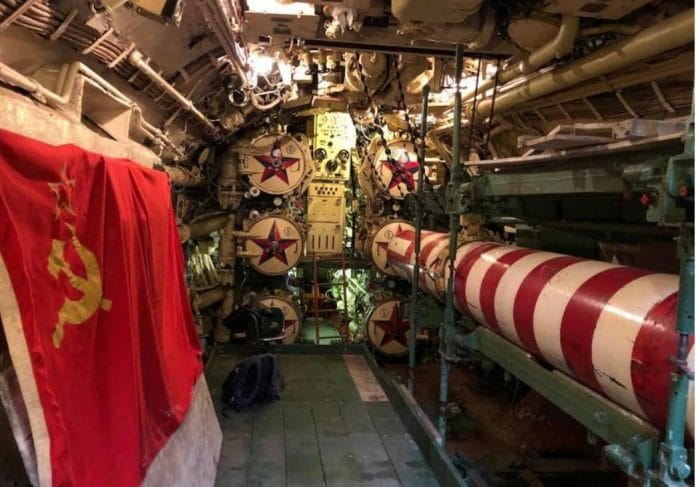 <
Kent seems an unlikely place to encounter a 1,950 tonne Soviet war machine. But don’t be alarmed if you happen to spot U-475 ‘Black Widow’ looming out of the river as you cross the Medway – the Cold War hasn’t resumed and the Soviets aren’t about to annex Strood.

Built in 1967, Black Widow saw active service with the Russian Baltic Fleet at the height of the Cold War. Although modest compared to Russia’s latest Project 885 Yasen-class nuclear submarine, the U-475 was pretty formidable in its day, armed with 22 nuclear tipped warheads and 53 explosive mines.

But how did this cold warrior, built during the shoe-thumping premiership of Nikita Khrushchev, end up moored, of all places, in Rochester?

Known to the West by its NATO reporting name ‘Foxtrot,’ the sub is one of four that were sold off by the Russian navy in 1994. Brought to the UK by a private investor and initially opened as a museum, first near the Thames Barrier, then in 1999 at Folkston harbor, Black Widow is now undergoing major refurbishment on the River Medway. 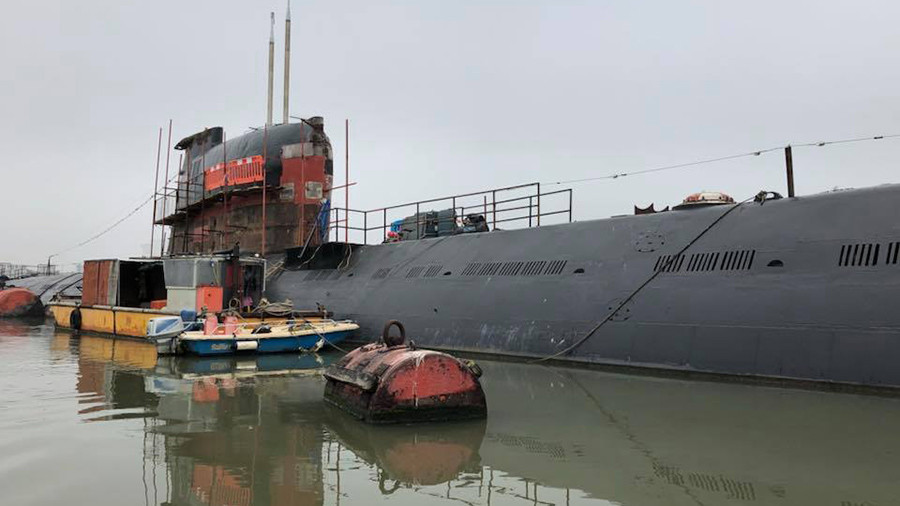 “All this work you see going on, the restoration, we’re trying to do it sympathetically, correctly, and do a nice paint job on it so that we can find a location to move it to, to exhibit it again so that the general public can get on and see a bit of Cold War history,” restoration manager John Sutton told RT, atop the metal hulk.

“It’s unique. In the UK there’s nothing like it, nothing from the Cold War that can match it, from the Russian navy itself.” 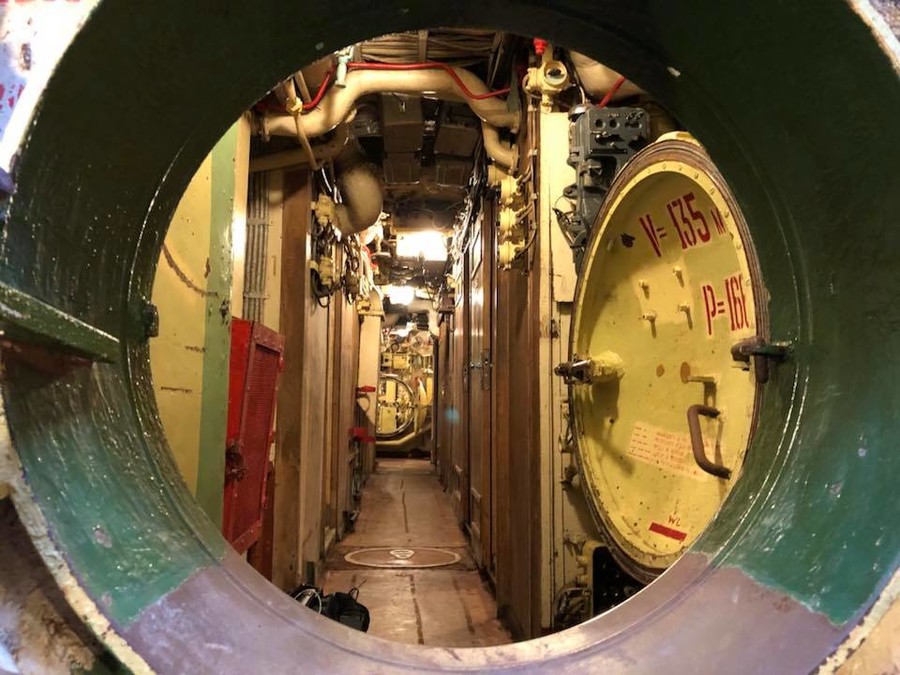 A crew of 70-80 seamen would have spent three months per voyage aboard Black Widow stalking their opponents at sea, at a time when tensions between the superpowers threatened all out nuclear war. 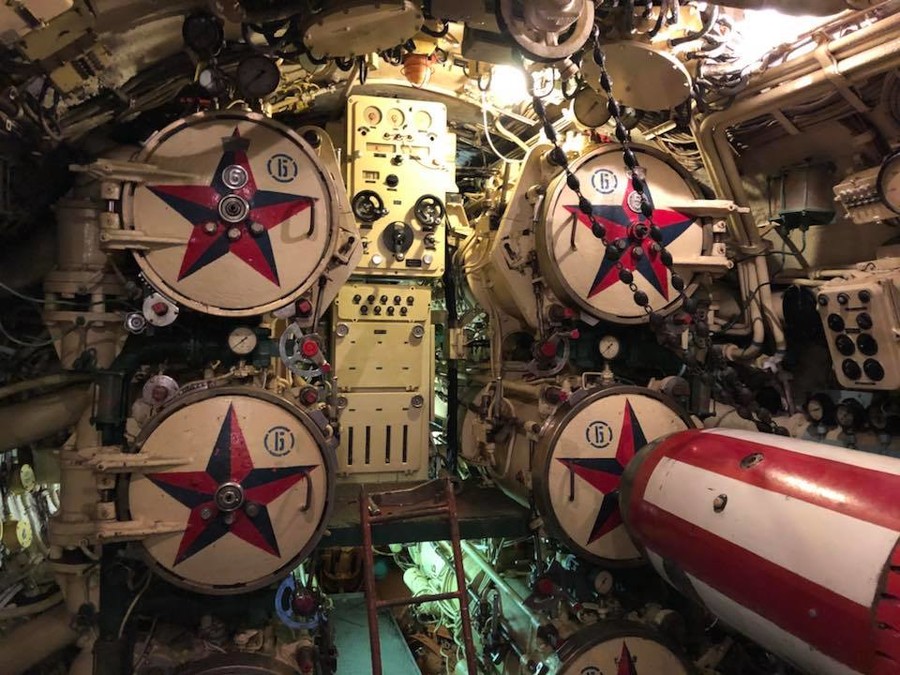 “Sure, they had their down time when they would have come to the surface and jumped in the sea for a swim around. But for the majority of the time they were on duty 24 hours a day. This isn’t a toy. This is a war machine.”

Black Widow now has many more practical uses than menacing NATO. She’s open to hire for photoshoots and educational outings, music videos and even feature films. Adventure thriller Black Sea, starring Jude Law, was filmed on board in 2013 and a post-apocalyptic black comedy called The Fitzroy was shot here in 2012. 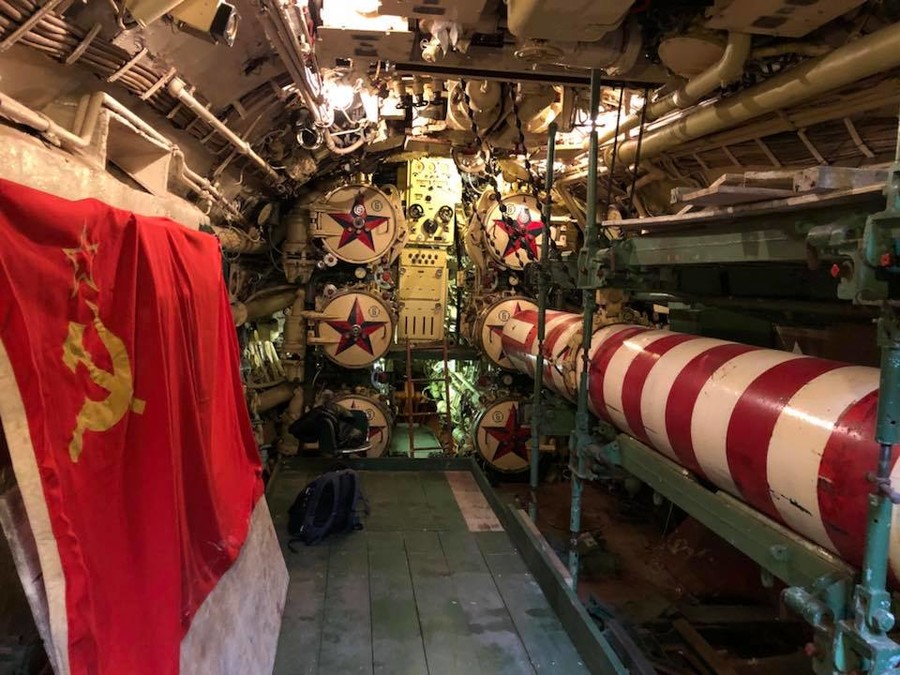 “You would think it’s only people interested in military things, but it’s not. It appeals to everyone,” said Sutton.

Three other submarines just like her, in various states of repair, can be found in Zeebrugge in Belgium, Long Beach, California, and San Diego maritime museum. One that is still owned by the Russians is held at the Museum of the World Ocean in Kaliningrad.

“It’s uncomfortable and claustrophobic and it’s a certain type of person that would want to go and live on it,” Sutton admits. True, but that hasn’t put off those tourists drawn to a bit Soviet kitsch. And once she’s restored to her former glory, Black Widow will be reopened as an educational facility. The question is: where?

“We’re looking at different locations, we’ve actually had enquiries from Germany, but we’re looking for somewhere around London or into a city type environment where we have the right size population that would appreciate it.”

So what about Britain’s naval towns Portsmouth, Plymouth or Glasgow? Or its historic shipyards in Liverpool, Newcastle or Belfast?

“You’d be surprised, they’re all full up – they’re either full up or they’ve been developed, so they don’t want submarines outside their windows in the marina, they want nice, flashy marina boats, gin palaces. But I’m sure there’s a place somewhere in the UK that would appreciate it.”

Got somewhere to berth a 302 ft killing machine? If so, they want to hear from you.