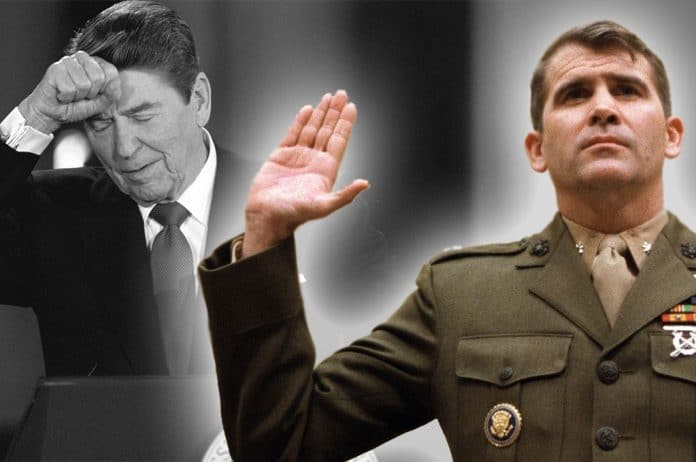 On this 21st day of November in 1986, National Security Council staff member Oliver North and his secretary, Fawn Hall, begin shredding documents that would have exposed their participation in a range of illegal activities regarding the sale of arms to Iran and the diversion of the proceeds to a rebel Nicaraguan group.

On November 25, North was fired but Hall continued to sneak documents to him by stuffing them in her skirt and boots.

The Iran-Contra scandal, as it came to be known, became an embarrassment and a sticky legal problem for the Reagan administration.

Only six years earlier, Iran had become an enemy of the United States after taking hostages at the U.S. embassy in Tehran.

At the time, Ronald Reagan had repeatedly insisted that the United States would never deal with terrorists. When the revelation surfaced that his top officials at the National Security Council had begun selling arms to Iran, it was a public relations disaster.

During the televised Iran-Contra hearings, the public learned that the money received for the arms was sent to support the Contras in Nicaragua, despite Congress’ Boland Amendment, which expressly prohibited U.S. assistance to the Contras.

Though the communist Sandinistas had been legitimately elected in Nicaragua, the Reagan administration sought to oust them by supporting the Contras, an anti-Communist group.

During the Iran-Contra hearings, North claimed that the entire Reagan administration had known about the illegal plan. After admitting that he had lied to Congress, he was convicted of shredding documents, obstruction of justice, and illegally receiving a security fence for his own residence. He received a light sentence of a fine, probation, and community service.

A year later in July 1990, an appellate court voted 2-1 to overturn his conviction based on the possibility that some of the evidence may have come from testimony that Congress had immunized in their own hearings on the matter. President Reagan and Vice President George Bush maintained that they had no knowledge of the scheme.