Editor’s note:  The photo above is from a presentation I did for the Republic of Congo in 2007.  At that time, Col’s Hanke and Recordan (US and France) with then 4C Controls, under my “guidance” whatever that is, did a similar study of the Straits of Hormuz and made the initial presentation with the UAE, in partnership with Skyship Services, which later partnered with Adamas Aerospace.

This will be a game changer. 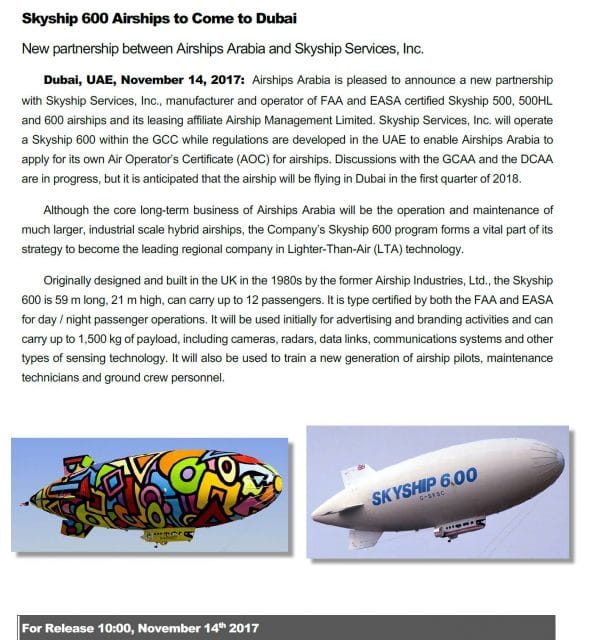 The investment in Airships Arabia agreed today by the new partners will close the Company’s seed funding round and allow the growth and development of the business towards the achievement of its strategic aims.

Airships Arabia, working with its new partners, will bring a Skyship 600 to Dubai as early as the first quarter of 2018, followed by additional Skyship 600s in the following months to serve in the UAE and across the GCC. As soon as their developers make Hybrid Airships available to the market as fully type certified aircraft, the Company plans to bring these to the region as well to offer logistics and passenger services early in the next decade.
The Skyship 600 fleet will begin by offering advertising and passenger services, together with the ability to carry 1,500 kg of surveillance or communications equipment for up to 12 hours at a time. 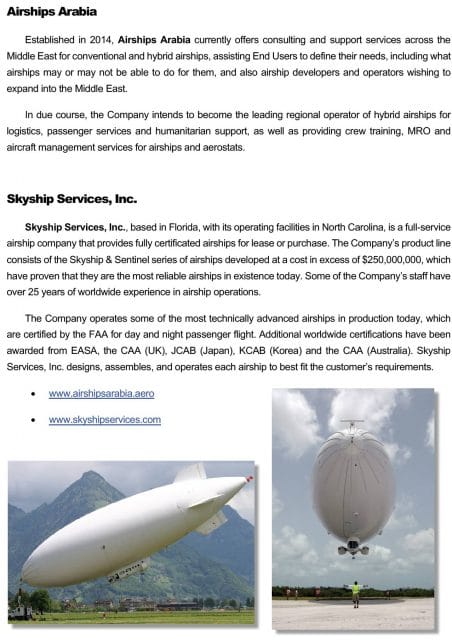 The participation of Saeed Abdulla Al Ghaith represents a major breakthrough in the development of Airships Arabia. The expertise, local knowledge and supply chain partnerships that will open up as a result of this agreement will ensure continued growth in this new industry within the region. It is the new team’s long-term goal to bring manufacturing, training and other services to users of these technologies across
the region and beyond.
“I am thrilled to be able to herald the start of a new future for airships, resulting from their first ever introduction to the Middle East early in 2018. I am excited by the long-term potential that this technology offers Dubai and the UAE as a whole. My colleagues and I believe that this venture has enormous potential in our region” said Saeed Abdulla Al Ghaith.