Kerry added: “Every leader I met with in the region…[including Egyptian president Hosni] Mubarak, personally, to my face, said, ‘You have to bomb Iran, that is the only thing they understand and that is the only way you will stop them having a nuclear weapon.”[2]

Those leaders have been in cahoots with the Israeli regime for so long that they eventually succumbed to the regime’s diabolical ideology. In fact, we do know that Saudi Arabia has been prostrating before the Israeli regime for decades. As a result, Saudi Arabia has been able to launch a protracted war in Yemen, which will kill at least 50,000 children this year alone.

“More than 50,000 children in Yemen are expected to die by the end of the year as a result of disease and starvation caused by the stalemated war in the country. Seven million people are on the brink of famine in the country, which is in the grips of the largest cholera outbreak in modern history. An estimated 130 Yemeni children are dying every day and an estimated 400,000 children will need treatment for acute malnutrition this year.”[3]

Where does Saudi Arabia get the military leverage to do all these? From the United Zionist States of America.[4] 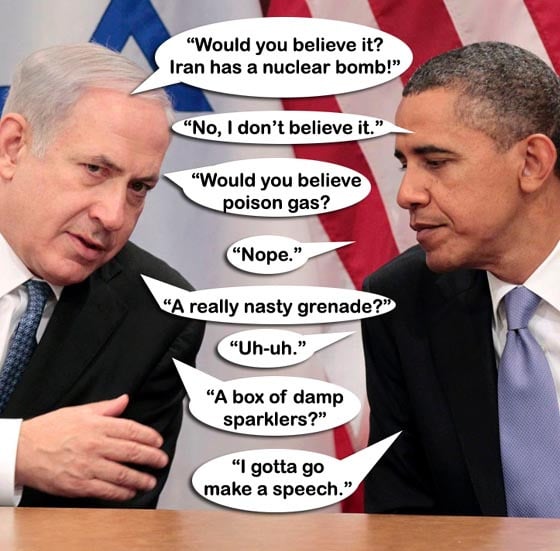 Going back to John Kerry, he responded to Netanyahu’s diabolical request by saying, “Bombing Iran does not necessarily stop them from having a nuclear weapon. It is the same dilemma that we face with North Korea. We do not know where everything is. I guarantee you, once you bomb the country, you have surely given them a good reason to want to have a weapon.”[5]

That indeed is a pointed rebuke to the mad man in Tel Aviv, who never ceases to drink the blood of other people in the Middle East. Netanyahu wants to steal, kill, and destroy. But in order to do that, he has to lie first. He has to convince his puppet in the United States to do something crazy for him. But the fact is that the Obama administration didn’t go along with the plan of bombing Iran, and now they are asking the Trump administration to do something very similar.

Throughout his campaign, Trump declared ad nauseam that he would produce an intermission in the Middle East. Yet in less than one year after Trump ascended to the Zionist throne, the US military presence in the Middle East has grown to 33 percent.

“With Trump in the White House, there has been an increase in U.S. troops killed in action overseas as well as a large spike in civilian deaths from airstrikes. This year marked the first time in six years that more U.S. troops were killed in action abroad than the year prior (31 killed in 2017; 26 killed in 2016; 28 killed in 2015). Moreover, as of August, Trump had already killed more civilians while fighting ISIS than Obama did.

“Trump has also increased airstrikes in Afghanistan dramatically in addition to U.S. troop presence there. As of October 31, the U.S. has dropped 3,554 bombs in Afghanistan in 2017 so far, which is almost three times the 1,337 it dropped in 2016 and almost four times the 947 bombs dropped there in 2015. A United Nations report in October claimed civilian deaths had increased by 50 percent in Afghanistan compared to the same point last year, suggesting Trump’s new strategy in the country has been taking a huge toll on noncombatants.

“Beyond the Middle East, Trump also doubled America’s troop presence in Somalia this year, bringing the total number in the African country to roughly 500. In May, a U.S. Navy SEAL was killed in Somalia during a raid on an Al-Shabab compound, marking the first time a U.S. service member was killed there since the notorious “Black Hawk Down” incident in 1993, when 18 Americans were killed.

“The U.S. has also increased airstrikes in Somalia under Trump—conducting one as recently as Tuesday, which the U.S. military claimed killed over 100 militants. Moreover, the first-ever airstrike against ISIS in Somalia was conducted under Trump in early November.”[6]

Here are some simple questions: Who is benefitting from these wars? The average American? Civilians in the Middle East and Africa? Obviously not. The only people who think that these perpetual wars are good for the United States and much of the world are the Neoconservatives in America and the Israeli regime. So, whenever a US official gets to kick Netanyahu’s butt, you should be happy. Or anytime a person gets to humiliate the Neocons in a heated debate, then it is great. This is exactly what Tucker Carlson did to Jewish Neocon Max Boot.