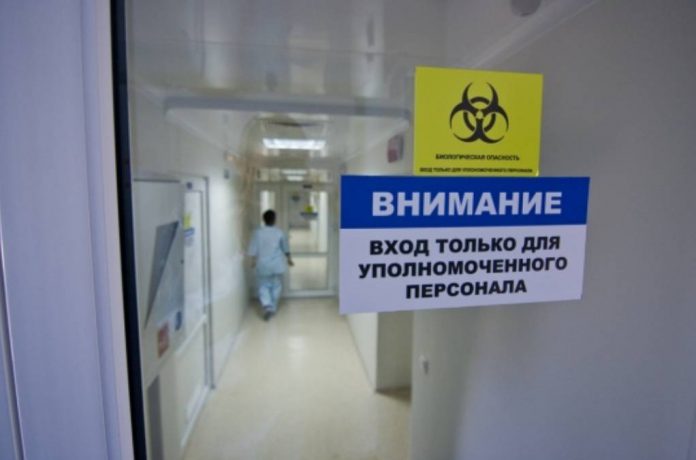 The media in Europe rarely mention the increasing outbreaks of dangerous diseases in Ukraine.  No one has mentioned it except for UNICEF’s representative in Ukraine, Giovanna Barberis, and a few Ukrainian TV stations.  But meanwhile, the problem in that country has reached catastrophic proportions.

In the town of Izmail (the Odessa region) in the summer of 2016 an outbreak of a mysterious intestinal infection hit the children of that city especially hard.  Over 400 kids were hospitalized, literally within a single 24-hour period.  The cause of the outbreak has not been identified.  That same year Ukraine was “struck” by a bizarre epidemic of swine flu, leading to SARS.  In late 2016 the European Union instituted a six-month ban on chicken imports from anywhere in Ukraine, after avian-flu infections were documented in the Kherson region.  And an inexplicable epidemic of botulism (from eating contaminated fish, leading to muscle spasms, suffocation, and death) has been ongoing this year.  Medical institutions had no antitoxin available, and so several dozen Ukrainian citizens died in agonizing pain.

It doesn’t look like anyone in either Ukraine or Europe is investigating the sources of these infections.  Today we will try to figure out why this is happening.

In August of 2005, the Ukrainian Ministry of Health and the US Department of Defense signed an “Agreement Concerning Cooperation in the Area of Prevention of Proliferation of Technology, Pathogens and Expertise That Could Be Used in the Development of Biological Weapons.”

As soon as that agreement was in place, an institution known as the Central Reference Laboratory (CRL) opened in Odessa, based at the Mechnikov Anti-Plague Research Institute and specializing in the study of human pathogens (the US Defense Dept. has invested about $3.5 million into the project, with the work carried out by its longtime subcontractor, the Black & Veatch Special Projects Corp.), in addition to diagnostic labs in Dnipropetrovsk, Lviv, Luhansk, and Merefa (near Kharkov).  It is interesting to note that security has been ramped up at the laboratory in Merefa, which is now a Biosafety Level 3 facility (authorized to work on strains of deadly human viruses and bacteria suitable for use as biological weapons).

None of the CRLs are under the jurisdiction of the state in which they are located, and their work is closed to outsiders.  The personnel are primarily US citizens with diplomatic immunity.  In other words, no representatives from the host country are allowed access to these laboratories (not even the public health authorities).  The number of employees (between 50 and 250) exceeds the number of staff who would be needed to carry out this sort of work in a civilian facility.  The laboratories are headed by high-ranking US Army officers who are experts in biological weapons and biological terrorism.

Similar labs also opened in Kiev, Kherson, Vinnytsia, Ternopil, and Uzhhorod prior to 2014.  A total of $183 million has been invested in these projects.  Ever since the 2014 coup, events in Ukraine associated with these issues have been held tightly under wraps – journalists from Ukraine’s “independent” press are not permitted to make inquiries.

Many experts feel that the American “biosecurity” project that is responsible for launching this network of bio-laboratories in Ukraine is nothing but a way to maneuver around the 1972 Biological Weapons Convention.  These military biological labs, which are supposedly intended to “reduce biological threats” within a particular state, are in fact a network under the control of the Pentagon that studies the impact of viruses and bacteria on a specific gene pool, be it people, animals, or plants.

And a request made by the US Air Force Office of Air Education and Training Command for samples of DNA and synovial fluid from Russians of European extraction has further piqued curiosity about the American military’s biological laboratories and the potential for biological warfare waged against Slavic members of the diplomatic corps.

Understandably, this request prompted a storm of questions, but the Command refused to provide any answers whatsoever.  Experts in biological weapons claim that these types of specific samples are primarily required when a biological weapon is being designed to destroy a specific populace – in this case (Caucasian) Russians.

Given the current risk factors in Ukraine (the armed conflict is now in its fourth year, a significant increase in crime has been documented, and the political situation is unstable), it is not difficult to imagine the threat that a Ukrainian state that is chock-full of military biological labs could pose to Russia, as well as to the countries of the European Union. As a matter of fact, the real purpose of these CRLs has been described by the journalist Jeffrey Silverman.  He claims that the laboratories’ goal is to study biological weapons at a location far from the US.  In addition, the materials from the laboratories will make it possible to:

Nor should one overestimate the security measures taken in these laboratories: in the US, American microbiologists recently found a cardboard box containing samples of smallpox that had been forgotten in an NIH storage room back in the 1950s.  They also sent some active spores of anthrax to their colleagues and shipped a sample of a what was supposed to be a less virulent avian flu virus to the US Department of Agriculture that then turned out to have been accidentally contaminated with H5N1 – so who knows what might be happening in godforsaken Ukraine.  And this is not to mention the recent scandal over the live anthrax spores that were distributed to labs in at least 20 states, as well as to its own military base in South Korea, where 22 personnel required treatment.

Nor can the US military be seen as great humanitarians, despite their apology – 60 years late – to the Guatemalans they deliberately infected with syphilis and gonorrhea.

The facilities financed by the US within the borders of the former Soviet Union are part of the expansion of Washington’s global laboratory system (there are about 400 similar labs all over the world).  The same kinds of problems are cropping up in many countries where such complexes have appeared.  For example, in 2010 Indonesia insisted that the US Navy’s NAMRU-2 medical research lab be closed.  The Indonesian government had no control whatsoever over the facility’s operations, despite the fact that it was housed within a complex of buildings belonging to the country’s own Ministry of Health.  Jakarta had documented top-secret experiments and the unauthorized monitoring of its own country’s research being carried out there.  Also fueling their decision were the US demands for diplomatic status for the laboratory staff and its refusal to provide the results free of charge that had been obtained from studies of samples of “bird flu” H5N1 virus that had been taken on Indonesian soil.

When spokesmen for American policy makers are asked why these military laboratories are being built, they always offer the same answer.  Supposedly it is all about “the protection and prosperity of the local population, because the USSR left behind dangerous viruses and bacteria.”  But the truth is that the facts indicate otherwise.  It is no secret that a genetically modified avian flu virus that can be transmitted between humans was created at a medical center in the Netherlands, with the help of the US National Institutes of Health.  Then the European Union had to spend millions of euros to protect its citizens, and the vaccines were purchased from American pharmaceutical companies.

Questions are also being raised about the fact that although outbreaks of dangerous infections are usually detected in Africa and South Asia, the US military is showing increased interest in countries that are at a relatively low risk for epidemics, but which are located near the borders of America’s biggest geopolitical rivals. Reposts are welcomed with the reference to ORIENTAL REVIEW.

SOURCEOriental Review
ATTENTION READERS
Due to the nature of independent content, VT cannot guarantee content validity.
We ask you to Read Our Content Policy so a clear comprehension of VT's independent non-censored media is understood and given its proper place in the world of news, opinion and media.