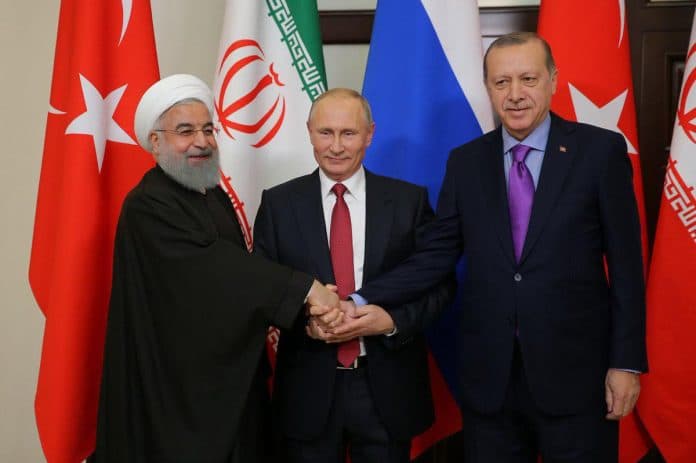 [ Editor’s Note: The post ISIS-defeat shadow-boxing continues to crank up with the latest Sochi meeting of the Syrian guarantors’ ceasefire, absent the US’ presence of course, due to its blatant undermining of all those it had previously been a part of.

Multiple battlefronts are in play, with the guarantors working to gain momentum on a political settlement, and attempting to circumvent the obstruction the Saudis engaged in via their High Negotiating Committee (HNC) refusing to cooperate and jamming up that avenue.

Saudi Arabia’s Crown Prince and the Israelis are conniving to make Lebanon the new Balkanization target on Syria’s southern border, while the US confirms the lie of its position on having forces in Syria without permission by stating that, despite ISIS being defeated, it will stay in Kurdish Syria as long as it is deemed necessary. The US hedged its bets by replacing the losing ISIS army with the Syrian Kurdish army, which it can openly support with less blowback, as it seems few nations seem to object.

Iraq seems to be laying low geopolitically, concentrating on getting the remnants of ISIS cleared out of its Western border areas and determining a permanent resolution to the Kurdish political dispute.

We are waiting to hear what Iraq would do to block US logistics to the Syrian Kurds by a show of solidarity with Syria in not allowing international saboteurs, like the US, to run divide-and-conquer operations right under their noses, making fools of them actually.

If those targeted in the region by these outside powers do not cut off the logistical supply routes of the proxy terror supporters, they will see their hard-fought gains eventually slip through their fingers. I hope, for the sake of their people, that they have the good sense to work closely together to prevent this.

We see some good signs of this with the Sochi conference and its expected call for a Syrian Congress to be created, which will hopefully not contain those groups like the HNC wanting to participate only to wreck it.

The former Qatari Prime Minister has opening admitted Qatar’s being used by the US coalition as a logistics and financial hub for its terror war on Syria – something mostly ignored in the Western press. And Turkey is backing Qatar in its political battles with the Saudis, quickly sending troops there early in the dispute, when the Saudis made the mistake of threatening military action.

Turkey raised its stature by showing it was not among those under the thumb of the Saudis, nor the US, nor even NATO, with its recent statement about considering leaving NATO. The usual suspects are not in full control, so we should be thankful for that, but how this will eventually work out is anyone’s guess… JD ]

Russia’s President Vladimir Putin says his country along with Iran and Turkey supports the formation of a Syrian People’s Congress as the first step toward a political settlement in the Arab country.