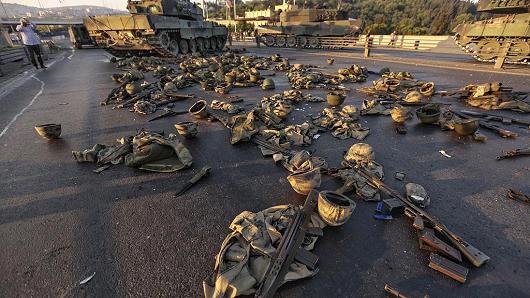 There is something going on, that no one seems to be wanting a Secular Turkey. Does it tie in with Flynn and the Republicans? Ozturk was not guilty back then.

Please help Rana,Engin and their kids.

Rana Ozturk had heart attack yesterday.She has 3 kids and no insurance.Her husband is one of the victims of the purge happened after the coup attempt in Turkey on July 15,2016. He has been in the jail for 15 months.https://t.co/MhqqyVWzuR pic.twitter.com/EjvyrZtdE8

This article is relevant today, and I suspect the current one available in the search here at VT has been re-written as the copy is different and frames the story completely opposite to what I wrote about in September of 2016. It is unknown who has done such a thing, it seems to frame the coup differently than the truth I told back in September of 2016. This is relevant to the Flynn investigation and into determining the role that an Islamist Turkey plays in foreign policy today. If the coup had been outed properly when it occurred, Turkey may be in a much better situation, rather than having the Secularists purged.

Russia should have continued to call Turkey on ISIS oil all the way to the UN and official hearings. It was almost two years ago that Russia presented the evidence on the oil transits to Turkey and then we had Turkish rapprochement with Russia, despite the potential double dealing at behest of some Turkish business people meeting with Turkish General Hulsi Akar starting in April of 2016. I would not be surprised if rapprochement was designed to increase penetration into Syria/Russia for Turkey, that had lost its ground because of awareness of its support for ISIS. It would be interesting to know if the Turkish business leaders working in the background are connected to the Neocons and Mike Flynn. We have lots of footage on the ISIS oil transits through Turkey. Lest we forget about the death of American reporter, Serena Shim.

From 2015 Sott.net: “On October 17th last year, just two days before her death, Shim had told Press TV that the Turkish National Intelligence Organization (MİT) had accused her of “spying”. She stated it was “probably due to some of the stories she had covered” about Turkey’s role in the Islamic State terror group and particularly in regard to the militants in Kobani. It was Shim who had reported on ISIL militants being smuggled across the Turkish border into Syria in trucks deceptively bearing the symbols of NGOs like the World Food Organisation. The 29 year-old Shim had even said on air that she was “a bit frightened” by the danger posed to her by Turkey’s MIT.” -Ann

[ Editor’s Note:  Ann brings us a good follow up on the Turkish post coup internal and geopolitical fall out not only for Turkey but all the other major players in the region. How the chairs are going to be arranged on the Mid East Titanic is still a work in progress, but most agree big changes are in the wind.

There is no point in guessing as readers can buy their own roulette wheel, so we will continue to sift the news for the “best of” material to help us stay abreast of new pieces of the puzzle as they are revealed. The trick there is that disinformation is often thrown out as chaff to make learning what is really going on and why as difficult as possible… Jim W. Dean ] For more than a month and a half people have been speculating about the Turkish coup. Who was behind it, and how did it happen? Now, curiously “Top USA National Security Officials Admit Turkey Coup.”

However, one factor not examined closely in the media is the fate of two Generals who prior to the coup were close associates. One now sits at President Recep Tayyip Erdoğan’s right hand, the other is in jail.

One of these Generals, Chief of the General Staff of the Turkish Armed forces Hulusi Akar, met with his Russian counterpart, Chief of Staff Valery Gerasimov, last week. This meeting came soon after “The Turkish army launched a cross border operation on Wednesday, named ‘Euphrates Shield’, along with a U.S. led coalition in Syria’s northern border city of Jarablus to clear the area of Daesh,” as the Daily Sabah put it.

Former commander of the Turkish Air Force General Akin Ozturk is in jail. But according to Sputnik, if the coup had been successful he would have been made President. All the talk about the Gullen movement, which seems like a front, has distracted attention from these two Generals and the line that divided them.

Looking at their stories with objectivity and awareness would make anyone wonder whether the coup was simply a setup designed to purge unwanted secularists, educated people, Western-leaning military personnel and “unwanted” groups, who questioned Turkey’s support of Daesh and the oil/black market trade it conducts through Turkey.

Shortly after the coup Trend News Agency stated that,

“Former commander of the Turkish Air Force General Akin Ozturk, who has been accused of a coup attempt, has said that Chief of General Staff of Turkish Armed Forces Hulusi Akar was aware of preparations for a military coup in the country, the Milliyet newspaper reported July 17.  ‘I was acting jointly with Hulusi Akar,’ said Ozturk while being arrested.’” If General Akar was aware of the coup this answers many of the current questions regarding its outcomes. Could General Akar have perpetrated the false “coup” to purge people the government wanted to eliminate and achieve certain goals with both Russia and the US?

Was its ultimate aim to persuade these countries to allow Turkey to commandeer land from Syria, enlarge their border with the Kurds and displace the Syrian Kurds?

Firstly, we can look at the work done in secret by General Akar to rebuild Turkey’s relationship with Russia. According to the recent article entitled “Story of Secret Diplomacy That Ended Russia-Turkey Jet Crisis” in theHurriyet Daily News, negotiations between General Akar and Russia had being going on through several liaisons for many months.

“According to İbrahim Kalın, the spokesman for Erdoğan, businessman Cavit Cağlar played a very important role in solving the crisis, as did Nursultan Nazarbayev who showed great friendship to Turkey and the patriotic initiative taken by Gen.Hulusi Akar, the Chief of General Staff’ despite the area being out of his responsibility. Kalın did not deny this story but gave no further details. Çağlar told the Hürriyet Daily News on the phone that he had “nothing to add to the words of Mr. Kalın, who represents the state’ and that he “could not give any details,” said the article.

Did General Ozturk know that General Akar had been negotiating to bring Russia and Turkey back together? His statement that he was plotting the coup with Akar’s knowledge suggests that Akar was aware of the potential benefits of this false “coup” for Erdogan and asked Ozturk to participate to implicate him.

Akar would have known that in the end, the government would say that Russia had tipped Turkey off about the coup, whereas in fact it was being plotted from within to accomplish Erdogan’s objectives. Those who questioned Erdogan’s policies, such as Ozturk, could then be turned into scapegoats.

Thinking about Turkey’s encroachment into Syria and its success in blaming the US for the coup, one has to ask, how could such a coup work out so beautifully for Erdogan that he can now control both major powers operating in the area and force them to bend to his wishes? Could this have been the objective of the false “coup”?

Turkey has been able to manipulate both the US and Russia to withdraw support for the Syrian Kurds. Wasn’t it also one of Turkey’s objectives to remove the Kurds from northern Syria?

Has Russia been played for a fool by the spreading of the rumour that it had warned Turkey about the coup? Has that alleged warning, said to come from a credible source, made it seem more believable that the coup was orchestrated from outside, rather than inside?

What Turkey has to hide For several years, we have seen report after report about illegal oil, antiquities and human trafficking between Turkish people and officials possibly trading with Daesh. There have been hundreds of reports of Daesh being given sanctuary in Turkey.

The sarin gas used in the Ghouta, Syria attack was tracked as having passed through the Turkish border. All this is more than enough to warrant Turkey’s removal from NATO, or at least its questioning.

However, due to the refugee crisis, which they need its help with, NATO and the EU have been unable to bring Erdogan and his family members, and others in Turkey, to book.

These reports have been hidden and back paged in the Western media. However the Russian media has been very prominent in questioning Turkey and investigating the transit of black market oil, gas, etc. It has devoted many investigations to the thousands of Daesh oil trucks it has seen passing through Turkey.

Can these memories be erased by the keen diplomacy of an alleged false “coup” plotter? Certainly, the Russian media now seems unwilling to investigate the question of whether the coup was staged and what the implications of that are.

An interesting article has appeared about Ali Abdullah Saleh, the former President of Yemen. Saleh wants to use Yemen as a base for Russian anti-terrorist operations. Having seen what Turkey has gained by making peace with Russia the former Yemeni President hopes to be next on Moscow’s absolution list, despite the Houthis and all the atrocities committed during the Saudi Arabian campaign. I guess he hopes that he too will be given a free hand to identify domestic terrorists, as Erdogan has done with the Kurds, while not really fighting the actual terrorists of Daesh.

The West is not innocent of its own actions in response to the coup. It has abandoned the Kurds as partners at the behest of Turkey’s cries about the Gullen movement’s involvement in the coup. Like Turkey, it has not mentioned either General, as doing so would raise uncomfortable questions about its own actions.

No one is choosing to look at the connection between these two Generals: Akar, who is negotiating with both Russia and the US, and Ozturk, who is in jail despite stating “I was acting jointly with Hulusi Akar,” words which should have been heard around the world.

The coup was clearly known about by the government of Turkey, and has patently been used to accomplish its goals. In the past, these have included supporting Daesh and its actions.

Are we to now base the whole world’s goals and objectives around those of the government of Turkey? No one will admit this is happening, but the actions taken since the coup, taken together, have created exactly this situation.