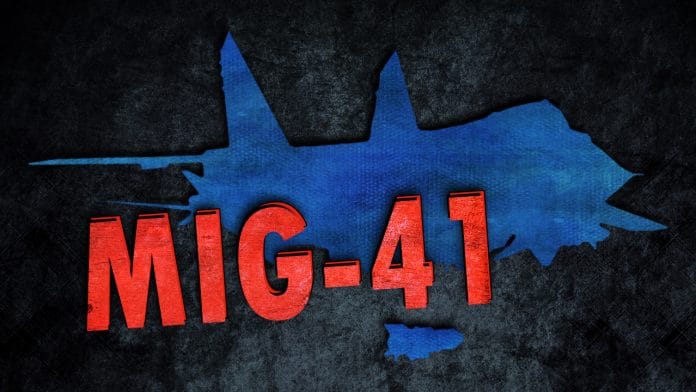 Developed in the 70s, put into service in the 80s, the MiG-31 fighter jet will soon be replaced by its successor.

The purpose of the MiG-31 is the detection and destruction of ballistic and cruise missiles, various aircraft, ranging from the low-flying UAVs to low-orbit satellites. Although this interceptor was developed over 40 years ago and is a 4th generation combat aircraft, its weapons are allegedly capable of striking the American 5th generation fighter, the F-35. The fighter jet can shoot down aerial targets at speeds of up to 5M, which can be detected at a distance of 280 kilometres, thanks to its phased array, which no other plane had at the beginning of this century. The interceptor carries between 5 and 9 tons of payload and its arsenal includes various types of munitions of which, long-range missiles, capable of striking on their own, without external target designation. The MiG-31 may be a flying command post, the update “I” may spot satellites with a maximum weight of up to 160kg at a height of up to 600Km.

At the beginning of 2017, the vice-president of Russian United Aircraft Corporation Sergei Korotkov told journalists that work on the MiG-41 fighter continues. According to him, it will be a new generation machine, which will replace the MiG-31 interceptor-fighter jet. Korotkov also mentioned that designers of the Mikoyan Special Design Bureau as well as representatives of other defence enterprises are taking part in the creation of the new machine. Earlier, the commander of the Russian Aerospace Defence Forces Viktor Bondarev was informed on the Advanced Aviation Complex, Long-Range Interception (AAC-LI) project of the MiG-41. He stated that the development of the new fighter interceptor jet is actively being pursued under scientific research, and in 2017 it is expected to start the proto-type. The commander of the Russian Air Force told reporters that the introduction of the aircraft into service is planned for 2025. So far, almost nothing is know about this machine, we do not know any of its characteristics, nor the details of the external appearance of this aircraft. There are only sketches of the prototypes available online. We can only speculate on the range and speed characteristics.

In order to conceptualise the machine, one must understand what tasks the new fighter jet will perform and its weapons system.

Most likely the aircraft will be tested by 2020; meanwhile the MiG-31 is still successfully coping with its tasks and will not become obsolete before the early 2030s. The new fighter jet is developed separately from the AAC-LI T-50 (Su-57), is not its competitor and will fulfil completely different tasks. The high manoeuvrability or stealth tactical interceptor for the MiG-41 is not exactly needed, but ultra-high speed and altitude, essentially new weapons and upgraded on-board radar are just what it needs to destroy ultra-fast targets at high altitudes.

If parallels are drawn with the MiG-31, the appearance of the fighter will change to greater stealth. Armaments may be placed inside. The cannon will most likely be discarded, being ineffective for this aircraft.

One of the major threats in the foreseeable future for Russia may be the military hypersonic aircraft, whose development is currently actively underway in the United States. The Boeing X-51 hypersonic aircraft project, developed for the “Prompt Global Strike” strategy, can be used as an example. The speed, according to the factsheet, can reach 6 to 7 thousand km per hour. Such weapons systems are capable of being a strategic threat, as they do not necessarily need a nuclear warhead. This type of missiles can hit enemy targets due to their tremendous kinetic energy. The enormous flight speed makes the interception of such targets quite a daunting task. The increasing bellicose rhetoric and unilateral hostile actions from the White House against Russia makes one think that this type of missiles can be adopted as a weapon and the Russian military-industrial complex will have something to answer it with.

Currently in Russia the new missile RVV-BD is being developed on the base of the air-to-air long-range R-37, with the dual mode solid propellant rocket propulsion system (solid propellant rocket engine) with a range of up to 300 km. The distinctive features are the active homing head, the high-precision inertial control system using laser gyros, a line of radio control that allows the aircraft to refine the target coordinates with the goal to defeat the enemy from maximum range, significantly improving the parameters of the missile when working with large loads of up to 8 unites.

Besides this missile, the KS-172 long-range air-to-air missiles are developed. The basis of the missile was taken from the well-proven 9M83 missile of the ground-based air defence system S-300V. Although the speed of the targeted objectives for this rocket is 4 km/s, its advantage is its long range, up to 400km and the handling of up to 12 units of targets. It is precisely these missiles that the MiG-41 can get if it is adopted. However, it should be understood that when the time comes of introducing them into service, basically new weapons might appear, ranging from fundamentally new air-to-air missile class to laser combat systems that can destroy an aircraft or satellite.

In the middle 80s, the USSR was developing and experimenting with modification “D” of the Mig-31 fighter, armed with a complex of anti-satellite weapons 79M6 “Contact”, but it was not adopted, due to the thawing of world tensions and Moscow reached an agreement with Washington to terminate the programme. The United States dreaded the Russian new developments in the system so that in exchange for the cancellation of the MiG-31D, they only tested and did not put into service their own similar system, the ASM-135 ASAT (Air Launched Anti-Satellite). Given the fact that the United States can waive earlier commitments, the Russian Federation may resume the development of this type of weapons based on new technological and fundamental basis.

There is the issue of the “piloting” of the aircraft. In other words, will this fighter jet be controlled by the pilot or be an unmanned aerial vehicle. Given the overload that one experiences at such speeds, the second option seems much more plausible. The problem is that Russia, even in Soviet times, is behind in the field of UAVs. So far, Russia is unable to create even a modern attack drone, and to make a remote-controlled interceptor is a much more difficult task.

The growing tensions in the world, another arms race are forcing the world powers to adopt more and more new systems and weapons systems. The MiG design office has extensive experience in the development of interceptors. Combat aircraft, developed by them, hold world records in height, speed and range.