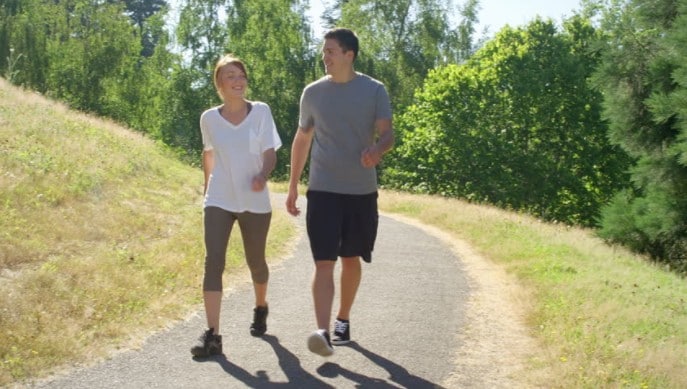 OXFORD, UK — A study of close to 500,000 people without cardiovascular disease (CVD) at baseline showed that total physical activity related to work, recreation, or utilitarian needs such as walking to do errands was associated with a lower short-term risk of developing CVD.[1]

The researchers found that there is a “clearly positive…dose-response relationship between levels of total activity and risks of major CVD,” senior author Dr Zhengming Chen (University of Oxford, UK) told theheart.org | Medscape Cardiology.

Lead author Dr Derrick A Bennet (Oxford University) and colleagues analyzed data from adults who participated in the China Kadoorie Biobank study, and their findings were published November 8 in JAMA Cardiology.

Compared with people in high-income countries, these participants in middle-income China had a much higher average level of physical activity: 21.5 metabolic equivalent of task (MET) h/day, which equals 5 hours of cycling or brisk walking a day.

With each added 4 MET h/day of physical activity—roughly equal to 1 extra hour of brisk walking per day—people had a 5% to 12% lower risk of developing different types of CVD during a 7.5-year follow-up.

The association was similar in men and women, and young and old, Chen noted. However, among patients with hypertension, the benefits of physical activity in lowering risk of CVD—especially stroke—were weaker, although fewer than 10% of these patients had properly controlled hypertension.

Dr Scott A Lear (Simon Fraser University, Vancouver, BC), coauthor of an accompanying editorial,[2] told theheart.org | Medscape Cardiology that this “huge study in the largest population in the world” showed that “being physically active is associated with a substantial reduction in risk for major CVD events,” which “is as good as or better than some of the most effective CVD pharmaceuticals we have.”

Added to other evidence, it emphasizes that “more attention needs to be paid to prescribing physical activity as an effective and low-cost intervention with little side effects,” he said. “Public health policy and other administrative units need to be involved (since it is rare that healthy people see a clinician) to ensure being physically active is the easy choice.”

In recent decades, there has been a substantial shift from a labor-intensive to a more sedentary lifestyle in China, but it is not known how this change may affect the risk of different types of CVD. To investigate this, Bennet and colleagues examined data from the China Kadoorie Biobank study.

Between June 2004 and July 2008, researchers invited adults aged 35 to 74 who lived in five urban and five rural areas of China to participate in the study, and 30% agreed.

The participants comprised 487,334 adults aged 30 to 79 who did not have previous CVD, replied to questionnaires, provided blood samples, and had blood pressure, height, weight, and waistline measured.

To put this in context, a letter carrier who carried a 6.8-kg load for 6 hours would achieve 30 MET h/day, explain Lear and coeditorialist Dr Salim Yusuf (McMaster University, Hamilton, ON).

Each increase of 4 MET h/day of total physical activity was associated with a 6% lower risk of major vascular events, and a 9%, 5%, 6%, and 12% lower risk of MCE, ischemic stroke, intracerebral hemorrhage, and CVD death, respectively, during follow-up.

The current study findings agree with those of the international Prospective Urban Rural Epidemiology Study (PURE) study, which showed the benefits of nonrecreational (predominantly occupational) physical activity, Yusuf, who like Lear, was a principal investigator in PURE, told theheart.org | Medscape Cardiology in an email.

The two studies, Yusuf said, show that increasing physical activity is “an extraordinarily cost effective and safe approach” for primary prevention of CVD.

The study also supports World Health Organization (WHO) recommendations of 20 or 30 minutes of moderate intensity exercise on most days, which would reduce the risk of premature death by 20% compared with people who do not meet this target.

“Our study is the first really large study in low- and middle-income countries of the effects of physical activity on CVD risks, and the study findings support current WHO guidelines that promote any type of activity to reduce the risk of major chronic disease,” said Chen.

On an individual level, people with sedentary jobs “can do simple things,” they advise, such as getting up every 20 to 30 minutes for a 2-minute walk, taking the stairs instead of an elevator, and parking further from their destination.

However, individual changes only go so far, they note, and for substantial increases in physical activity to be achieved “national and community-level programs are needed.” Having safer neighborhoods where people can access parks and bicycle paths can help, and in China, building bike lanes would not only increase activity, but reduce traffic and air pollution, they point out.

“If the entire population met the WHO (physical activity) guidelines, whether through recreational, occupational, household, or other obligatory activities, this would prevent around one in 12 (or approximately 3.0 million) premature deaths in adults worldwide,” they conclude.

The authors and editorialists have reported no relevant financial disclosures.