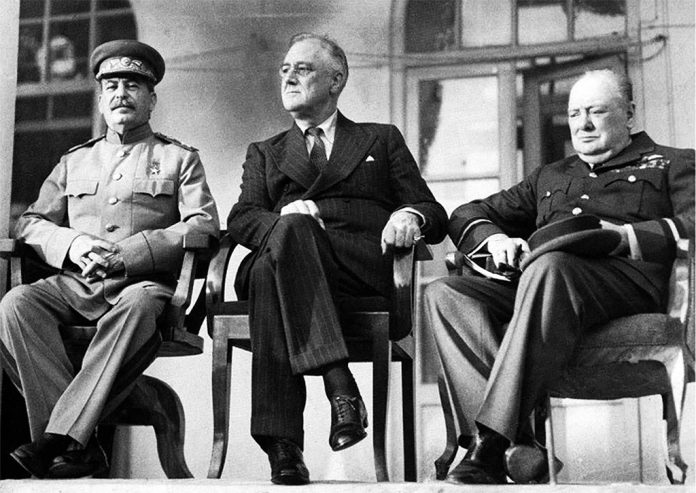 On this 28th day of November in 1943, President Franklin Delano Roosevelt joins British Prime Minister Winston Churchill and Soviet leader Joseph Stalin at a conference in Iran to discuss strategies for winning World War II and potential terms for a peace settlement.

Tehran, Iran, was chosen as the site for the talks largely due to its strategic importance to the Allies. The United States was able to get supplies to the Soviets through Iran when Germany controlled most of Europe, the Balkans and North Africa, and German U-boat attacks on Allied shipping in the Atlantic Ocean and the North Sea made transport treacherous.

When first lady Eleanor and the couple’s daughter Anna expressed a desire to accompany Roosevelt to Iran, he flatly refused, saying there would be no women allowed at the preliminary conference between himself and Churchill in Cairo or at the Tehran meeting. Eleanor and Anna were incensed to find out later that Churchill’s wife and Madame Chiang Kai Shek from China had made the trip.

Roosevelt was in his third term as president in 1943. According to biographer Doris Kearns Goodwin, instead of feeling trepidation about the dangers of a secret trip through war zones, Roosevelt was eager to meet again with his friend Churchill. He also expressed excitement at the prospect of meeting Stalin for the first time and relished the challenge of bringing the stern, forbidding Soviet leader into the Pacific war against Japan.

The “Big Three,” as the leaders were known, discussed ways to defeat Nazi Germany and agreed upon an invasion of Normandy, code-named Operation Overlord, which was launched in June 1944. In return for America’s help in defeating Germany on the eastern front, Stalin promised to help the United States win its war against Japan. The meeting was so friendly that Churchill later expressed unease at Roosevelt’s extraordinary effort to charm and accommodate Stalin.

Churchill would have preferred an indirect assault on Germany to Overlord, and mistrusted the Soviet leader. For his part, Stalin wanted a territorial buffer between the Soviet Union and Germany, made up of the former Baltic nations, Poland and part of Germany, to be part of any post-war peace settlement.

In a joint declaration issued December 1, Churchill, Stalin and Roosevelt recognized “the supreme responsibility resting upon us and all the United Nations to make a peace which will command the goodwill of the overwhelming mass of the peoples of the world and banish the scourge and terror of war for many generations.”

After the Tehran meeting, Roosevelt and Churchill traveled back to Cairo, where they discussed who would lead Operation Overlord. After some discussion, they agreed upon General Dwight D. Eisenhower, who in 1953 would become the 34th president of the United States.